Albert Heijn Teams Up with SuperBuddy for Same-Day Delivery 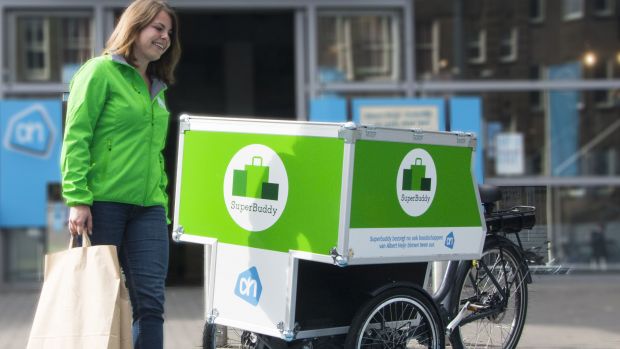 Dutch market leader Albert Heijn is to start a trial with SuperBuddy’s Rappie in Rotterdam, De Telegraaf reports. Currently, four grocery stores are testing the service, where personal shoppers pick goods in stores and then deliver them to customers by bike.

SuperBuddy is also available in Zwolle and Utrecht. In Rotterdam, however, it now has an exclusive co-operation with Albert Heijn with its service being integrated into the retailer's platform. Minimum order is EUR10, delivery costs are EUR5.

According to Distrifood, SuperBuddy now also hopes to grow into other markets via the co-operation. Due to the merger of Ahold and Delhaize, Belgium ranks very high on the list of potential expansion targets.

Albert Heijn is the latest retailer to follow the international trend of speeding up grocery deliveries using bicycle couries. This is particularly suitable for cities with large catchment areas of individual stores – and where else could it be more appropriate to follow such an approach than in bicycle country #1: The Netherlands. At two of its stores in Amsterdam, the supermarket and superstore operator already provides home delivery of goods by bike in a radius of 15 minutes. In Amsterdam, Albert Heijn is partnering with bike courier company Tring Tring.

The move to use bicycle delivery is perfectly in line with the retailer’s attempt to remain the Dutch forerunner when it comes to convenience and digital innovation. In the last couple of months, Albert Heijn has announced the launch of an intelligent shopping list, compiling suggestions and predictions based on previous purchases, a Facebook chatbot providing recipe tips and checkoutless stores.

The fact that Albert Heijn seems to get plenty of its inspiration from online giant Amazon is obvious. The app Ahold Delhaize is using for its same day delivery in Amsterdam is actually even called ‘Appie Now’.  Whereas in other countries Amazon’s richness of ideas is setting a new standard for competitors and accelerating developments, the situation in the Netherlands is different. The e-commerce behemoth does not have a presence in the country, apart from an online e-book store. This means Albert Heijn is in the sophisticated situation of not being the trend follower but setter, playing offense not defence in its home market. And while doing so it could also use concepts and innovations already tested by Amazon in other countries.