Aldi Süd Fights For Its Reputation 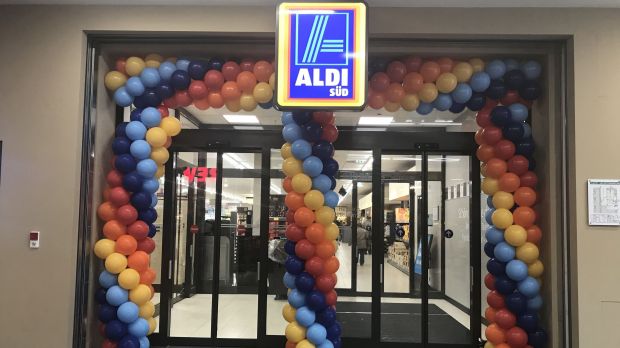 Photo: LZ Retailytics
Among Australian truck drivers, Aldi is not as welcome as it may seem here on this photo from a store opening in Germany.
Aldi Süd is facing fierce opposition from truck drivers in Australia about compensation and working conditions. According to the Financial Review, the German retailer told the Federal Court it will uphold legal action to stop the Transport Workers Union (TWU) criticising it over wages and conditions in its supply chain, despite failing to secure interim orders that would have censored press releases, flyers and social media of the union’s campaign.

Reportedly the TWU have been protesting and picketing Aldi warehouses in Adelaide, Fremantle and Sydney over the past three months, accusing the company of using low-cost transport contracts that pressure drivers to cut safety corners. According to the discount retailer, the statements risked damaging its brand "among the purchasing public" who would come to regard it as "an unsavoury supplier of groceries". Aldi feared potential employees would no longer think of it as a "responsible and generous employer" and it would find itself "forced into the indignity of having to advertise for the jobs" – after previously enjoying a surplus of applications.

TWU national secretary Tony Sheldon accused Aldi of attacking freedom of speech. "This case could have implications for any groups wishing to highlight the harmful practices of a particular company," he said. Aldi strongly denied any suggestion it placed pressure on drivers to operate unsafely and said the TWU failed to provide any evidence to support its claims.

You need to savour this slowly: Aldi would find itself “forced” into the “indignity” of “having to advertise” for the truck driver positions as it would come to regard as an “unsavoury” supplier of groceries.

So, according to Aldi, advertising for jobs is degrading for a retailer and a sign for an obnoxious company, because otherwise, applicants would be waiting in droves, thirsting for the highly coveted jobs, which are actually more than jobs but a vocation. What an idealistic view! (Or should we call it arrogant?)

The dramatic wording may be due to the purpose it serves in court, but it is exemplarily revealing. It stands for the philosophy that Aldi grew up with, in the 1960s or so in Germany, and at the same time it is paradigmatic for the problems that Aldi is facing today, especially in competition with other retailers and its aged clientele.

Aldi grew up in a pull market, meaning that it didn’t have to force its products on its shoppers – they came of their own accord because they needed inexpensive groceries. It didn’t have to do aggressive, obtrusive advertising other than cutting prices again and again. Au contraire, marketing was considered dubious – “talking people into buying something they don’t need”. That’s what the others do but not “we”, the good guys.

For decades, when there was still plenty of room for expansion, this idealistic approach didn’t hurt. Only problem being that certain competitors who behaved in a bit more 'flexible' way managed to come up, and managed to grow faster. (We all know this naughty Swabian copycat upstart… L..l.) It became a major problem when Aldi’s strict ethics made it stand in its own way. Being good is reputable and honest, but if it hurts yourself it’s no longer appropriate, especially when nobody notices and the public morale has changed.

It is painful – and surely annoying – to see that one simple customer statement on Twitter or Facebook, be it true or not, about an Aldi steak that is considered too cheap (or too expensive, depending on the respective reasoning) can trigger a shitstorm topped by an extensive press coverage; it is provoking to watch a publicly funded broadcaster falling below all standards of journalism just to propagate populist name-and-shame messages.

But Aldi's standards are still high, too high. For instance, Aldi Nord does not promote its price cuts on the German website. Why? Because there may have been price increases for other products on the same day, so it would be ethically inappropriate to promote the one but not the other! Yes, of this kind are Aldi’s standards – still. But it is in the long process of giving them up, as part of its general repositioning course. Aldi Süd is a step ahead, as always - consequently, other than Nord, Süd does promote its price cuts.

So, Aldi will no longer be as strict as it has been for decades. This dispenses it from many rules that have hindered progress. The new-found freedom – or lower standards – allow it to enter countries with lower legal and democratic standards (see China), they allow for new marketing methods that are essential for manufacturer brands, they provide leeway in margins and pricing, etc.

Keeping your hands clean, as a reliable, compliant, responsible and immaculate company will remain crucial for Aldi, like in the Australian case. But lowering its own high standards and learning to live with them, this will be one of the most challenging parts of Aldi Nord's and Süd's strategy change, especially for the long-standing management.
Topics: Aldi