Aldi Will be Number Two in Europe by 2020 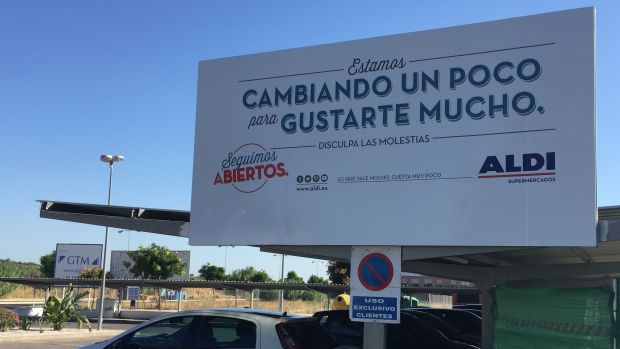 Photo: LZ Retailytics
"We are changing a bit to please you much": Aldi, here in Spain, is on a reinvention course across Europe.
The march of the discounters is continuing in Europe: Within three years Aldi is set to become the second largest grocery retailer in Europe according to LZ Retailytics forecasts, leaving behind industry giants Carrefour, Tesco and Metro. Online grocery is also set to grow rapidly, spurred on by the market entry of Amazon Fresh.

By 2020 Aldi’s combined Aldi Nord and Aldi Süd businesses will constitute the second largest grocery retailer in Europe. Forecasts from LZ Retailytics, Lebensmittel Zeitung’s new analyst group, demonstrate that the traditional full range grocers can expect to come under increasing pressure over the next few years. This pressure comes from two sides: The rise of online grocery driven by Amazon Fresh and the continuing expansion of Aldi and Lidl’s discount formats.

Last year Aldi was only the fifth largest grocery retailer according to our rankings. Even this year according to LZ Retailytics forecasts it is set to move ahead of Tesco, which is losing value owing to the weakened British Pound.

By 2019 at the latest Aldi will also overtake Metro. In the event of a spin-off of the MediaSaturn retail group this would evidently happen sooner.

LZ Retailytics forecasts show that by 2020 Aldi will have even overtaken Carrefour in the European Ranking to take second place behind undisputed market leader Schwarz Group (Lidl, Kaufland).

Gain access to full information on current and future market shares, turnover, number of stores and banners of the European grocery retailers with your own personal access to the LZ Retailytics digital and mobile analyst platform.

In recent years, Aldi seemed to be in a rather defensive position in several European markets, including Germany, the Benelux and southern Europe (very much in contrast to the situation in the UK). Market saturation, the concept-inherent limitations regarding range size and complexity reduction, together with extremely aggressive expansion and innovation from Lidl have all exerted increasing sales pressure on Aldi Nord and Süd.

Aldi, used to thinking in ten-year strategies rather than quick tactic moves, has had to adjust to growing competition. It is currently in the midst of a transition phase, the end of which is not yet discernible, as it lists major branded products, upgrades its stores, and reinvents its marketing, pricing and communication strategies. What would be an everyday task for conventional retailers equates to more of a revolution for a company with a strong philosophy like Aldi.

Initial results of Aldi's strategy are promising, ensuring further growth for the years to come, as reflected in LZ Retailytics’ forecasts. At the same time, predictably, critics warn that despite all the advantages of going mainstream, giving up on core principles dilutes a successful concept. And some regular customers already say the shiny new stores are “wasted money” – the hardest possible verdict for a die-hard Aldi manager. (We hold such observations for quite notable. After all, a significant part of Aldi’s more affluent clientele has traditionally come from the consumption-critical educated sector, those who appreciate a simple, unobtrusive environment, and intellectuals who claim to see through the blatant marketing of many brands and retailers.)

Despite added value and uptrading dominating the discount sector, the often-made statement that there was room for another new lowest-price discounter positioned under Aldi and Lidl must be rejected. Thanks to their size and buying power, Aldi and Lidl are strong enough to fight off any such attempt. Who would dare to compete anyway? Possibly Amazon, but that would be early to say. (You can find detailed forecasts for Amazon in the LZ Retailytics database.)

The other retail giants in Europe are not expected to show massive growth rates in the coming years. The global crisis years have been a dampener on globalisation and internationalisation, driving reversion to regional and local orientation. But less so for the discounters, for various reasons such as private ownership and increasingly national buying. They have designed their concept to thrive in good and bad times.

While markets outside Europe offer fantastic growth opportunities for Aldi’s concept, it will face increasing discount competition there. A new battle field will launch today in four weeks, on 15 June, when Lidl finally opens its first US stores. In the USA, Aldi Nord (Trader Joe’s) and Aldi Süd (Aldi) have had a rather cosy and unhurried life since the 1970s. That will change now.

As for Europe, LZ Retailytics expects promising growth for Aldi Süd to come from the UK, where sales densities are higher than in any other market. Aldi Süd UK makes EUR15mn per store there, which compares with EUR8mn in its German home market, and EUR5mn at Aldi Nord. (More data in the LZ Retailytics database!) New market entries include Italy, and potentially Romania. For Aldi Nord, Spain is looking promising. World-class marketing and the redoubling of its range are expected to ignite sales growth there.

The LZ Retailytics data is based on a careful and rather conservative forecast of Aldi’s future development. Aldi becoming the number two in Europe by 2020 is not only a very realistic scenario, it is also a situation that suppliers and competitors should prepare for.