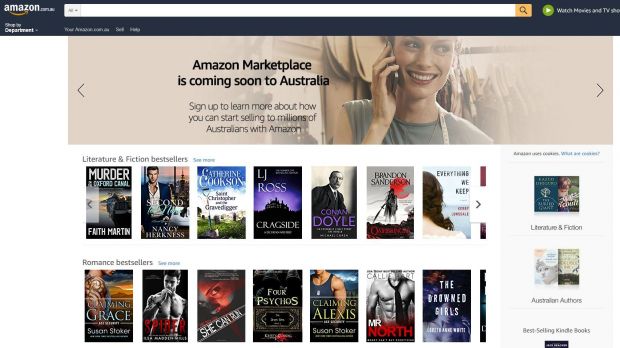 Photo: amazon.com.au
Amazon has been present in Australia since 2013 with a Kindle store but is poised to launch a full online site.

Amazon has entered Australia, with the launch of a full-range retail and marketplace offering on amazon.com.au. Although the official launch for the new site is set to coincide with Black Friday tomorrow, a number of customers have reportedly gained access to the site one day early as part of a testing phase.

The move has been known about for some time, since earlier this year the company established a dedicated fulfilment centre in Dandenong, around 40km southeast of Melbourne, on Australia’s densely populated east coast. This will allow the retailer to speed up distribution to reach customers with one- and two-day shipping. Until now Australians wishing to shop have needed to use Amazon’s US site and put up with long wait times and international shipping charges.

Amazon has been poised to enter the market in Australia for some time, yet now reality is setting in for established local retailers, which now have to brace themselves for the impact during the busy holiday season. In addition to the usual categories of books, electronics and toys, local press reports suggest that grocery is likely to form a key category for Amazon Australia and even that Amazon Fresh may also be set to launch. This could be a potential major headache for established retail leaders Coles and Woolworths.

For Amazon the move makes absolute sense. The Australian market is opening up to new players, as demonstrated by recent market entries from German discounters Aldi and Lidl. At the same time the online channel is taking off. Wesfarmers, which owns Coles supermarkets, OfficeWorks, Kmart and Target in Australia recorded double-digit online growth for the year to June 2017. Meanwhile rival Woolworths said that it expected to “leverage growth from digital over the next three years” across its Woolworths and Big W operations. As more retail revenue transitions across to the online channel in Australia, the market is taking off and Amazon’s timing couldn’t be better. But, as in other markets, Amazon already knew that – it has had a presence in Australia via AWS since 2012 and an online Kindle store since 2013.

Stepping up its expansion rate is something that Amazon needs to continually focus on, if it is ever to reach its target of generating more than 50% of revenues internationally. As its third quarter results demonstrated, the retailer remains US centric with 59% of revenues generated in North America, compared to 31% internationally and 10% from AWS. Yet, there are far more rumours of Amazon entering new markets than actual moves by the retailer itself.  Sensibly, the online giant remains cautious and will only enter new markets when it sees that the time is right. As Black Friday dawns across the globe tomorrow, we can expect another record performance from the online leader. And established retailers in Australia may do well to gain insight from highly competitive markets in the US and Europe to see how this is likely to play out.