Amazon Fresh has started in Germany, launching today in parts of Berlin and Potsdam. The service offers 85,000 items and is available to Amazon Prime members for an additional EUR9.99 monthly fee, following a month-long free trial. Free delivery is offered in two-hour timeslots from 05:00 to 22:00, for orders over EUR40. Orders placed by midday can be delivered the same evening and those placed by 23:00 can be delivered next morning.

Product categories include fruit & vegetables, meat and fish, milk and dairy, fresh bakery and around 6,000 organic items as well as baby, health & beauty and pet. Amazon Fresh has also teamed up to deliver for 25 local merchants, including Lindner, Kochhaus, Zeit Für Brot and Nordsee. DHL is currently handling all deliveries for Amazon Fresh in Germany. Amazon Fresh has its distribution centre in Alt Tegel, close to an existing DHL facility, Lebensmittel Zeitung reports. 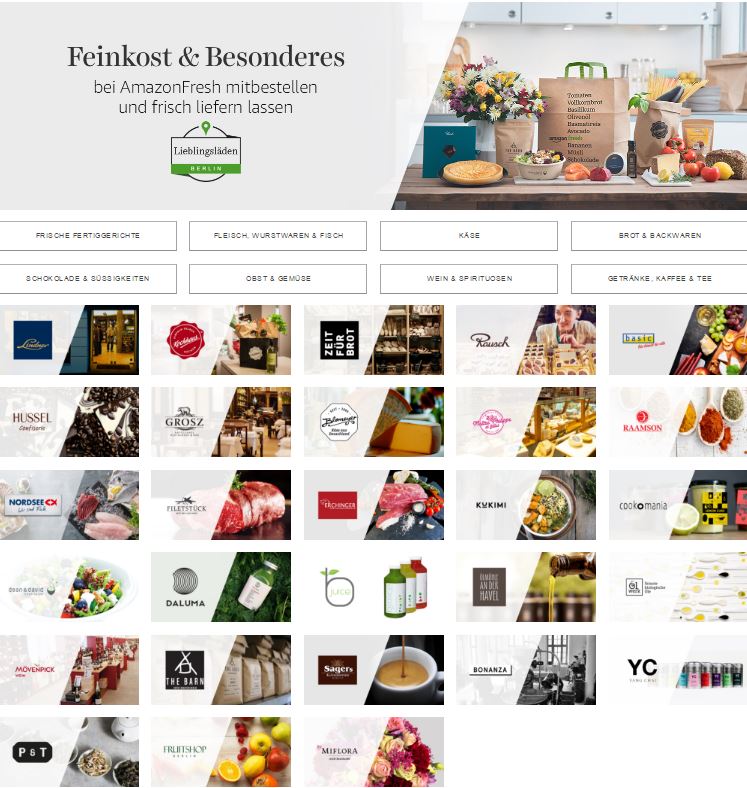 Amazon
In addition to its own items, Amazon has signed up well-known local merchants to complement its Amazon Fresh service in Berlin.

Commenting on its launch in Germany, Vice President for Amazon Fresh Ajay Kavan emphasised that the company was looking for long-term success by combining great selection, good prices, flexible delivery options and the service that customers expect from Amazon. He said: “The bar is set very high in grocery retail. We are starting with a comprehensive assortment in a limited area and will take our time to continually improve the service based on customer feedback. We will consider methodically and very specifically how we expand this to other areas.”

Amazon Fresh’s long awaited launch into the German market is timely and set to serve as a catalyst within the German online grocery market, which has been slow to get off the ground. There is no doubt that in the long term, Amazon has set its ambitions high for grocery. But it is also highly unlikely that Amazon’s competitors will sit tight and wait for market share to be eroded. Now that the first shot has been fired, we can expect to see competition intensify. However, Amazon’s service offering is setting the bar high.

Berlin, where Amazon has launched today, is the centre of Germany’s e-commerce scene for groceries. Established players here include Rewe,  Edeka subsidiary Bringmeister, DHL’s AllYouNeedFresh.de, Kaufland which launched in November and numerous independent grocery retailers. As online grocery services reach a critical mass here, we can expect to see stronger customer acceptance, to the potential benefit of all online players. Further launches from other retailers here are also highly likely. The next market for Amazon Fresh is set to be Munich, where Amazon Prime Now already operates selling groceries, and where Amazon has a logistics centre already established in Daglfing. After that we expect Amazon will move city by city as the time is right.

Looking more closely at the Amazon Fresh offer at launch, there are still gaps in Amazon’s assortment (for instance LZ Retailytics found just 3 yoghurts, 8 types of milk and 25 types of bread and bread rolls listed for the Berlin service). Amazon will also have its work cut out to convince Prime members to shop for groceries online and to pay the additional EUR9.99 monthly fee. But as Amazon said itself, it will take its time to get the offer right and to build its presence based on feedback from customers. This is what it is already doing in other markets, including the US, and internationally in London and Tokyo.

Even though it has long-term ambitions in grocery, LZ Retailytics does not expect Amazon to be a huge threat immediately. However, in the long term we have no doubts that it anticipates becoming a major online grocery player, since selling groceries drives volume and shopping frequency, which is of value to Amazon’s ecosystem. And, as we have seen in other markets such as the UK, the first mover advantage is significant (Tesco still retains around 40% market share having been the first to launch online there). 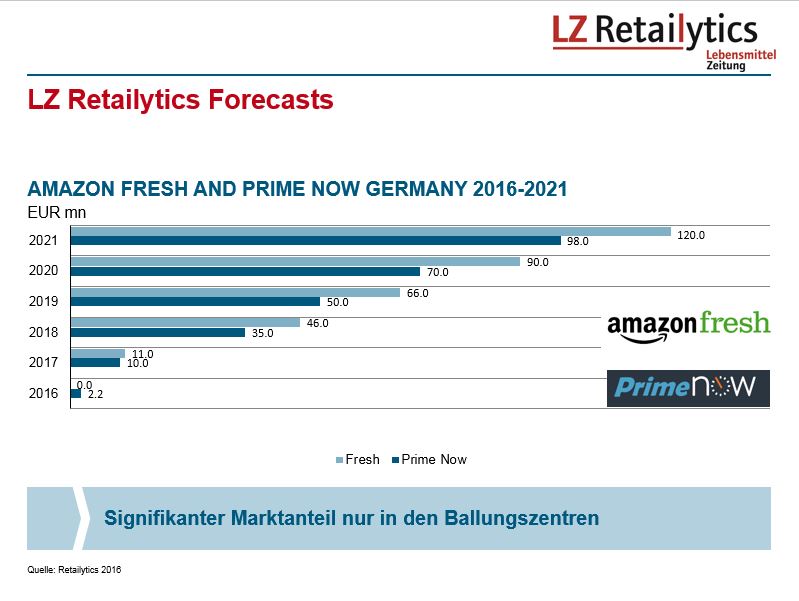 LZ Retailytics
LZ Retailytics anticipates that Amazon will adopt a market by market approach to Fresh, whereas Prime Now can roll out faster

For the immediate future, the threat to Amazon’s competitors comes from Amazon setting the bar high on its points of differentiation – its service offering. A high quality website, same day delivery, quality customer service and convenience are all set to become the expected norm from shoppers. And that means that succeeding online just became even more difficult for Amazon’s competitors.