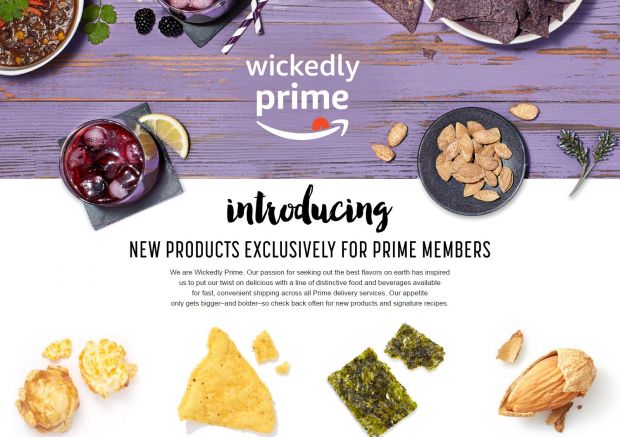 Amazon has developed a Wickedly Prime range of private label grocery items, which are available in the US exclusively to Prime members. The range launched with 16 items, including tea, soup, almonds, tortilla chips and seaweed snacks. Prime members may order the items through Amazon Fresh, amazon.com, Amazon Prime Now and Amazon Pantry.

As Amazon expands its grocery focus, the retailer reported that sales for its first quarter soared by 23% to USD35.7bn (EUR39.52bn), ahead of expectations. The jump in revenue was partly driven by the market in India, where the company says it is “moving fast”. Overall, international sales grew by 16% (or 21% excluding currency effects). US revenue was up 26% year-on-year to account for 59% of Amazon’s business. Grocery related developments during the quarter include the launch of Amazon Fresh in Tokyo, joining London as well as 21 metro areas in the US. The service is widely expected to launch in Berlin soon.

Rapidity and Exclusivity are Amazon's Trademarks

Amazon has ramped its focus in the grocery sector over the past three months and is growing rapidly, even ahead of its own expectations. It appears to have fingers in every pie and competitors should indeed be worried. Grocery will be a key category for Amazon going forward, as it seeks to increase shopping frequency and spend from its loyal Prime members.

To date, private label has been a weakness for Amazon. It has Amazon Basics for electronics, office and home, but is largely reliant on branded goods. In the baby category Amazon introduced Amazon Elements in 2014 but was forced to withdraw its nappies after these did not meet its quality standards. The brand recently added vitamin supplements to its limited range of mainly environmentally friendly baby wipes.

For Amazon Fresh, the retailer is being forced to team up with wholesale supply partners to supplement in categories such as fresh and dairy. In the UK it has a supply agreement with Morrisons. In Germany the retailer is set to sell products from Tegut. However, in the long term it will be essential for Amazon to develop its own private label lines, and from what we see of Wickedly Prime it appears it will go after premium quality and make these exclusive to Prime members. Exclusivity is a key differentiator for the retailer, which is increasingly adding to the exclusive products and services available to its loyal and higher-spending subscribers.

As to its latest results, the 23% growth in revenue reported by Amazon for its first quarter was ahead of market expectations. Amazon Fresh is now available in 21 US metro areas, as well as London and Tokyo. Amazon Prime Now, its 1-2 hour rapid delivery service, is available in 45 cities across eight countries, also selling groceries. The company is trialling bricks and mortar with Amazon Go and Amazon Fresh Pickup in Seattle. Amazon is leading a multi-pronged approach to establishing itself in the grocery market, and although early days it claims to be “pleased with what it sees”. As it continues to work on building its products and services, no one should underestimate it.