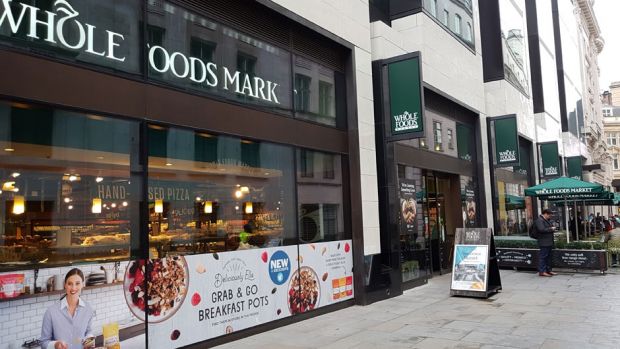 Photo: Lebensmittel Zeitung
Whole Foods remains committed to the UK market and seven stores will remain open. These are smaller and located in and around London.

Amazon is set to close two Whole Foods stores in the UK. The stores in Giffnock, Scotland and Cheltenham, Gloucestershire have been earmarked for closure, according to an official announcement, as the company works to consult with staff members.

In a statement Whole Foods said, “We remain committed to the UK market and will continue to look for ways to offer high-quality natural and organic foods to our customers.”

Whole Foods Market entered the UK in 2004 when it acquired seven Fresh and Wild organic stores. It subsequently added two stores to reach a total of nine organic supermarkets. The stores in Giffnock and Cheltenham, however, are disparate from the rest of its portfolio, being both larger and located outside of London.

Since its acquisition of Whole Foods Market at the end of August, Amazon is already beginning to clearly make its mark. We know that Amazon Prime will be the reward system for Whole Foods. We know that there will be closer collaboration between Whole Foods, Amazon Fresh and Prime Now. And something else that we now know: Amazon will not tolerate unprofitable stores in its portfolio.

The stores that Amazon is closing are large and located a long way from London, where the rest of its stores are clustered. Continuing to operate these inherited stores makes no sense from a business perspective. Footfall is likely low and the distribution costs of delivering to the stores must be prohibitive, particularly for the single store in Scotland. Amazon is right to question the sense in operating these stores, located as they are in such far flung locations.

Yet whilst it is closing two underperforming stores, at the same time the company says it remains committed to the UK market. It is our view that it makes far more sense for Whole Foods to continue operating a cluster of stores in London – and potentially other big cities across Europe – whilst at the same time playing to its online strengths. Via the Whole Foods acquisition, Amazon has bought an easy route into grocery private label and plenty of new opportunities to leverage these high quality, popular, recognised brands. But large stores are not required for this when it can very easily play to its strengths online to bring these brands to new shoppers in new markets. In the UK and US markets Whole Foods shop in shops are already present on Fresh and Prime Now and this is only the beginning.

So, what can we expect to see in future from Whole Foods? Well, Amazon has clearly said in calls with analysts that it believes in a “multiformat future”. In the US Amazon is investing in more staff for its Whole Foods store portfolio. Meanwhile in Europe, we could see the banner operating small stores in major cities as well as pick-up stations in high traffic locations. Like its store at Piccadilly Circus in London, these would act as flagships for the brand and increase awareness for the products, which can also be distributed to the masses online. As Amazon ventures deeper into the offline retail environment we can expect to see many changes and further disruption as it redefines the definition and expectations of omnichannel retail.