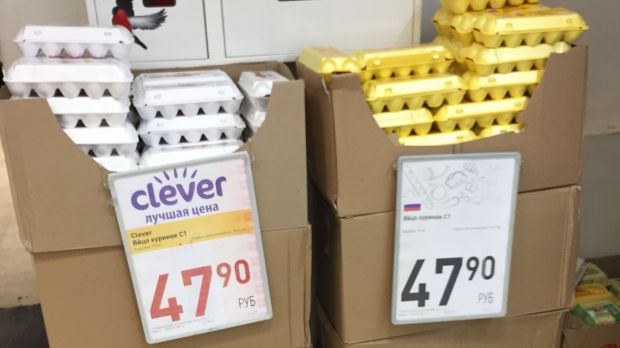 Billa has commited to its Ukrainian business, responding to rumours about a potential market exit. The division run by Rewe Group’s Austrian operation has shut down several outlets in the country lately. Some of its supermarkets are understood to have struggled, for instance its operation in Odessa. According to Ukraine Nachrichten, however, some stores in the country still enjoy great popularity.

A Billa spokesperson told the online news provider that the retailer was monitoring the performance of its network outside of Kiev and closing some underperforming stores. Recently, the Ukrainian Retail Association reported that Billa was looking for buyers for nine of its stores in six Ukrainian cities and that it had sold its store in Zaporozhye.

Waiting The Economic Stagnation Out

It is not surprising that, immediately after the first stores were sold, rumours arose about a potential market exit for Rewe Group’s Billa operation. It would have been just one in a line of several other divestments made over the past couple of years. Billa left the Italian market in 2015 followed by Romania and Croatia in 2016.

In Ukraine, Billa’s expansion has slowed down recently. After the operation reached its peak during the 2014 crisis with a network of 39 stores, domestic competitors appear to have made up ground in the market. LZ Retailytics expects Billa’s store numbers to fall below 30 outlets by end of this year. This means that the retailer has joined the ranks of ailing medium-sized supermarket operators that are struggling to survive in the shadow of the economic downturn.

One reason for Billa’s recent lack of success in the Ukrainian market might be that, during and after the crisis, shoppers have changed their habits. An increasing number of them have turned to price aggressive alternatives. This is probably the reason why fellow supermarket operators, like Velika Kishenya and Fozzy Group, have embraced new price-oriented, no-frills concepts. And this could also explain why players like soft discounter ATB are still expanding rapidly. Billa, in contrast, is neither perceived as a value player nor as a chain with an outstanding fresh offer, which would help to at least create a USP for the supermarkets.

According to Billa’s statement quoted by Ukraine Nachrichten, however, the Ukrainian situation seems difficult but not desperate. It is more likely that Billa intends to focus its network around the capital of Kiev and satellite cities – which was already speculated by the Ukrainian Retail Association. This move would make sense due to the fact that Ukraine is a challenging market in terms of logistics, particularly when goods need to be supplied to stores in rural areas. Billa’s network being widespread and comprising several isolated locations far from other stores has put the bottom line further under pressure. A focus on Kiev would also mean targeting the capital’s more affluent clientele, allowing Billa to wait out the economic stagnation. This would be a particularly logical decision as Billa’s margin buffer is understood to not be the highest, combined with an unfavourable cost situation and the aforementioned blurry USP.

Billa has earmarked investment of more than EUR100mn annually for the entire CEE region. The Ukrainian situation could be improved if some of that money was spent on the chain’s own brand development and direct imports. Particularly its economy private label line Clever might help Billa to be perceived as a more affordable retailer within the troubled market.