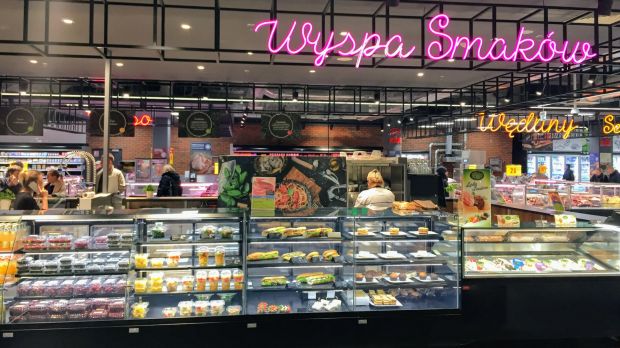 Photo: LZ Retailytics
At Carrefour's latest hypermarket, the "Island of Tastes" counter features food-to-go (sandwiches, sushi and salads), patisserie items and an ice cream counter.
In a price-sensitive market dominated by discounters, Carrefour has introduced key differentiators alongside pricing and its fresh produce expertise, which can be found across its different formats. The most visible is the importance of organic, health and special interest food. Polish consumers are increasingly sensitive to these topics, with some stores recording double-digit sales growth for the category which includes health-oriented, free-from and organic products. To strengthen its stance, Carrefour has a best price guarantee on selected products. 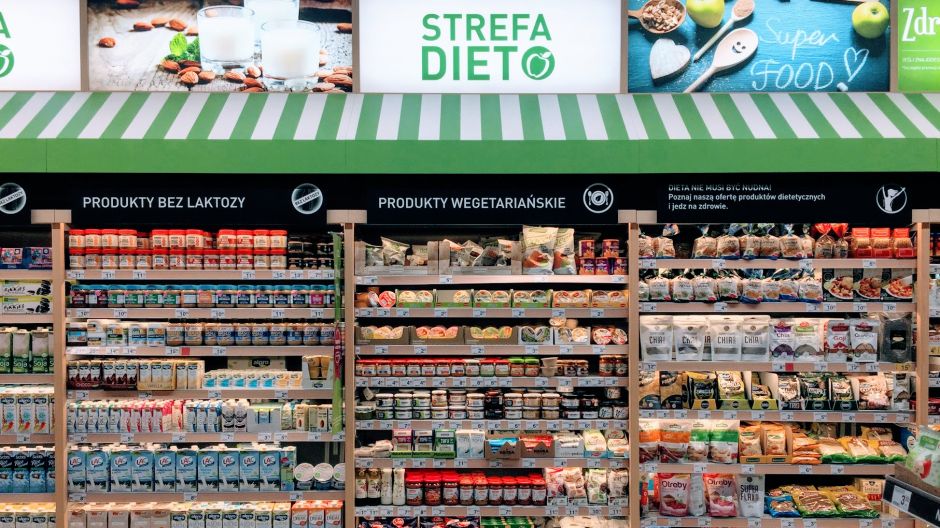 LZ Retailytics
The healthy food section lists 800 products at this hypermarket. Some large supermarkets list around 450 items.
In line with the rest of Europe, regionalism is increasingly relevant and Carrefour is working closely with regional Polish suppliers. Store managers do not have the opportunity to source products directly, but can make a request to the central office for the listing of relevant items. Further, in cosmopolitan areas such as Warsaw, hypermarkets feature aisles dedicated to local Polish products, which are organised by region. Similarly, Carrefour is differentiating from more limited range competitors via a wide assortment of over 300 regional craft beers adapted across its different formats. This assortment aims to appeal to Polish consumers as well as tourists looking to experience local tastes. 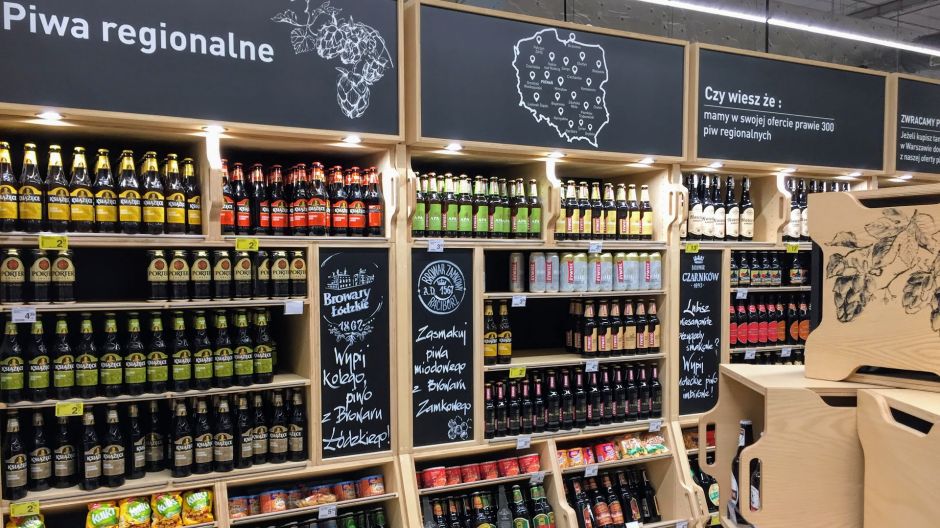 LZ Retailytics
The regional craft beers are clearly signposted by product origin and come with drinking recommendations.
In the food-to-go category, the retailer has introduced its own snacking area at a handful of large hypermarkets under the Smacznie (Tasty) brand. Across its formats Carrefour also offers dried fruits and nuts sold in bulk, typically found nearby the fresh produce section, as well as fresh apple and orange juice machines. 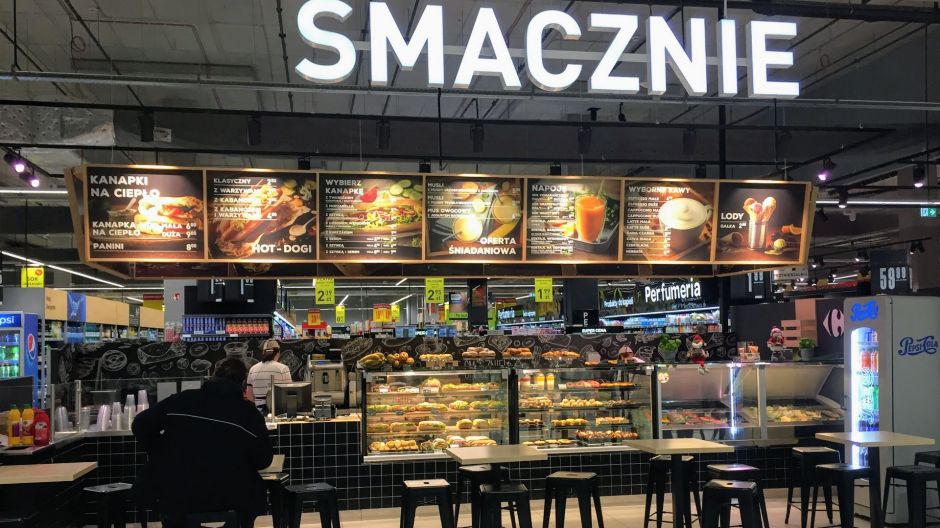 LZ Retailytics
The Smacznie (Tasty) corners are located by the hypermarkets and feature seating areas.

A Touch of Boldness

Organic, regionalism and convenience are key pillars for many retailers, from Finland to Portugal. Yet, in the current development stage of the Polish retail scene, Carrefour has found itself a niche in line with rapidly evolving urban consumer preferences. Admittedly, Auchan is sticking to its no-frills approach, Tesco is in dire need of investment, while discounters and minimarkets have constraints in terms of range extension. Price is not the main focus of these categories, which paves the way for higher margins. We believe this is a courageous step for a mass retailer in a conservative and price-sensitive market such as Poland. 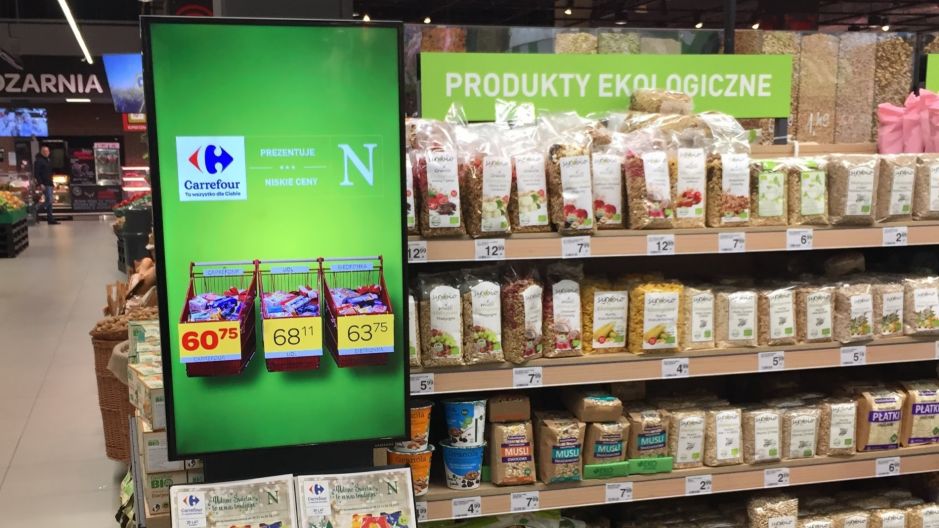 LZ Retailytics
Carrefour can hardly break free from the price pressure of discounters Lidl and Biedronka. With a combined market share of 27.2% in 2017, both set prices in the market and Carrefour advertises its selected basket accordingly.
Convenience food remains largely under-developed with consumers preferring to eat or prepare meals at home. Consequently, Carrefour's experimentation at its hypermarkets appears bold: the most recent hypermarket features a large food-to-go assortment, on-the-spot chef cuisine, as well as recipe boxes. Service counters and instore production (eg. sausage smoker or curing chamber) are similarly cost intensive, but key differentiators to promote a high competence assortment, to gain customer goodwill and improve traffic.

We feel the overall challenge for Carrefour in Poland will be to advocate differentiated and quality-driven assortments without stretching its price image too far and wide. Further, it is only a matter of time before competitors, including discounters, venture into Carrefour’s new fields of regionalism, organic, convenience, and new technology. Despite being one of the most multi-format players, Carrefour hypermarket performance in general, and non-food in particular, remains the elephant in the room which needs to be addressed.

We acknowledge that the investment in store upgrades were needed, but failed to create a strong momentum. LZ Retailytics data shows that Carrefour hypermarkets lost 0.5pp market share between 2014 and 2017. On the plus side, when the retail giant is looking to scale down its French hypermarkets, it can look to its Polish counterparts which are already 40% more compact, as shown by our LZ Retailytics data. These will face challenges of their own, which include the heavy blow the new Polish law on Sunday closures may have on the format going forward. 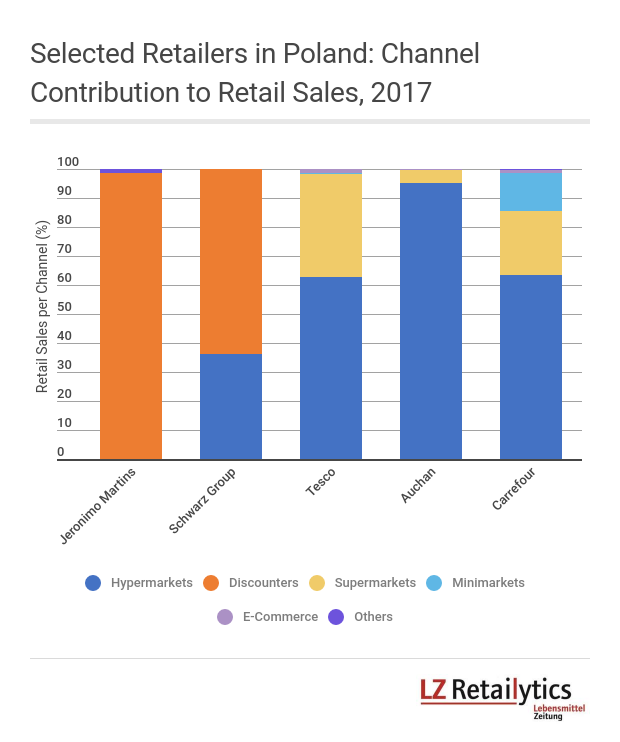 LZ Retailytics
When most competitors operate on a single or two channels, Carrefour diversified its portfolio beyond hypermarkets. The latter remains nonetheless dominant in the portfolio.
Gain access to more insights and data about Carrefour and more than 200 other retailers operating across 40 European countries, by subscribing to our retail intelligence platform. Sign up for a free trial here.
Topics: Carrefour