Carrefour Unveils its Vision for 2022

Photo: LZ Retailytics
Carrefour commits to its multi-format strategy with 2,000 convenience store openings planned within the next five years.

Carrefour CEO Alexandre Bompard has unveiled today his vision for the French retailer. In detail, the management has confirmed the intent to sign further partnerships in order to benefit from best practice with both start-ups and sector leaders, as has been illustrated over the past months (eg. Fnac-Darty, Showroomprivé, Tencent & Yonghui in China). Meanwhile, the retailer has committed to a EUR2bn cost reduction plan, which will impact direct purchasing (reduction of the assortment by 10%, negotiations at international level), indirect purchasing, logistics costs and structural costs.

The latter will translate in a voluntary redundancy plan aiming to cut one fifth of the corporate workforce. With many stores in the red, the acquisition of Dia France was deemed unsatisfactory. Carrefour will therefore divest 273 units, which will be either sold or closed. In terms of real estate, Carrefour will dispose of EUR500mn of non-strategic assets by 2021.

Meanwhile, the retailer committed to EUR2bn investments yearly into its network, which will be directed toward maintaining its assets, IT, supply chain and digital development. The latter will see resources soar six-fold to EUR2.8bn over the next five years, with Carrefour planning EUR5bn sales in food e-commerce globally by 2022, and a market share of 20% in France in the channel.

The new management pledged themselves to Carrefour's multiformat proposition, but French hypermarkets will see the most drastic change. While no store closure is on the table, the total sales area of the channel will be cut by 100,000 sq m within the next two years to improve operational efficiency.

Finally, regarding its assortment, Carrefour wishes to address the increasingly problematic non-food offering, while ramping up private labels to one third of turnover by 2022, and fresh produce sales three times higher than FMCG within the same period. In parallel, Carrefour intends to grow sales of organic produce four-fold to EUR5bn within the next four years.

We believe the Carrefour outlines to be relatively unsurprising, while they bring numerous concrete metric objectives to the table. We would not have qualified the vision as a clear break with the previous managements, at least not as clear as the eras of previous CEOs Olofsson and Plassat, but an acceleration of the trends addressing structural difficulties and a few strategic turnarounds.

Multi-format, e-commerce, supply chain efficiency, commercial competitiveness, sales increase of organic products, fresh produce expertise, hypermarket turnaround, are old dreams of Carrefour. Admittedly, these are the same for most grocers operating across Europe. Investments are slightly down year-on-year as the previous management completed the refurbishment of the bricks and mortar network. The freed resources can be widely allocated to digital.

As expected, Bompard's team has markedly raised the bar in terms of online objectives, from EUR4bn total e-commerce sales in 2020 previously, to EUR5bn sales for groceries alone in 2022. This raises several questions: Are the targets achievable? Isn't it too late? And more importantly: Can this contribute positively to the bottom line? Looking at LZ Retailytics data, Carrefour is indeed expected to outperform other grocery e-commerce players in France, but we feel the announced target will be a true challenge, unless Carrefour gears up its Drive click & collect openings, makes acquisitions or strikes up partnerships going forward. Similarly, the sales objective for organic produce is based on a linear projection of the growth recorded by the category in 2016 (32%), which might be challenging to sustain.

LZ Retailytics
Unlike Carrefour, E.Leclerc and Auchan ceased the take off of Drive click & collect stations to gain leadership in the French grocery e-commerce channel.
We believe the two main strategic U-turns concern private label and real estate policies. Carrefour's commercial turnaround over the past years was centred around branded goods in general, and A brands in particular, on par with the scaling-down of its economy private label line. Carrefour now wants to bring its private labels back to the fore as a key pillar of its price attractiveness. Beyond an increase of penetration in value, the retailer is to re-work its recipes to remove controversial substances, in line with what Système U and other retailers are doing. Further, as much as the previous management pumped hundreds of millions in the acquisition of real estate, Bompard wishes to dispose of EUR500mn worth of assets over the next three years.

Regarding the sensitive topic of hypermarkets in general and non-food in particular, Bompard seems to have opted for scaling down and rationalising the assortment. Despite the impressive announcement of a 100,000-square-metre cut in floor space within two years, the decrease represents a 5.5% drop in the French hypermarkets' average sales area versus 2017, LZ Retailytics data shows. The challenge will be to retain the big-box traffic relevance with a rationalised non-food offering, and we expect Carrefour's increased commitment to digital will play a strong part in this transition. 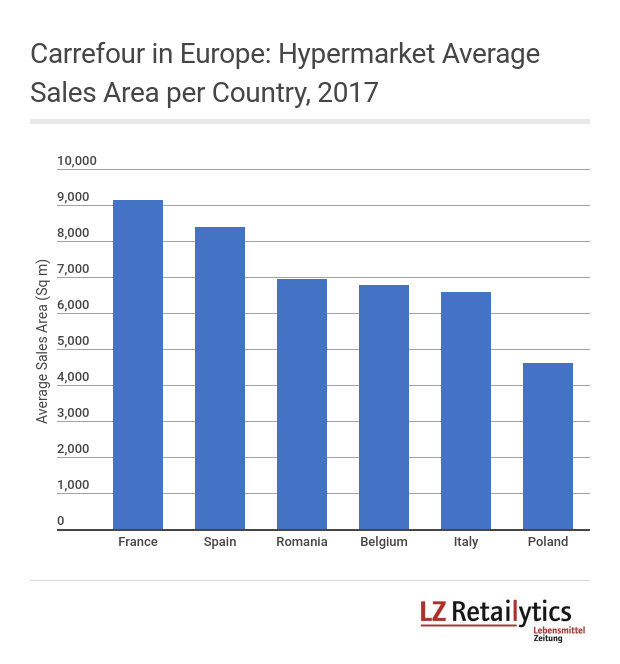 LZ Retailytics
France is home to Carrefour's largest hypermarkets and will continue to be going forward, despite down-sizings.
Topics: Carrefour