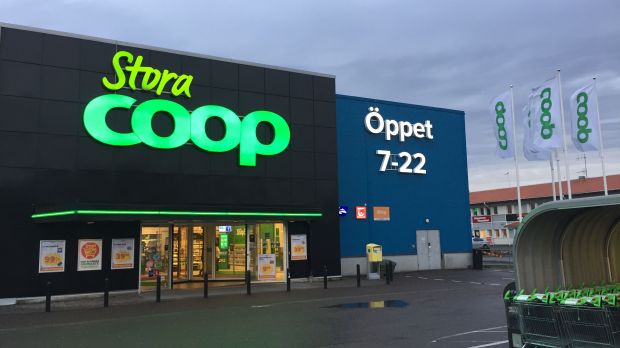 Sweden’s third largest grocer Coop Sverige is in the process of converting its entire network of hypermarkets, making the stores more compact and fresh food focussed. LZ Retailytics was invited by Coop Väst, one of the retailer’s largest consumer associations, to visit one of its converted Stora Coop big boxes in Kungsbacka, in the Southwest of Sweden. Our host and guide Mikael Mattsson, Marketing Director at Coop Väst, told us that the ideal sales area for the new concept is 4,500-5,000 sq m – the store we visited was slightly larger, which translated into a wider than average assortment.

Fresh food is at the heart of the Stora Coop concept, Mattsson said. The expanded fruit & vegetables section, placed early in the shopper journey, was extensive and made a pleasant, practical impression without being too elaborate. The serviced counters covered an entire side of the store and now play a much larger role than previously. Here, the white tiles signal cleanliness, while putting the focus on the products (seafood, cheese, meat and delicatessen). The in-store bakery is also a central part of the concept. 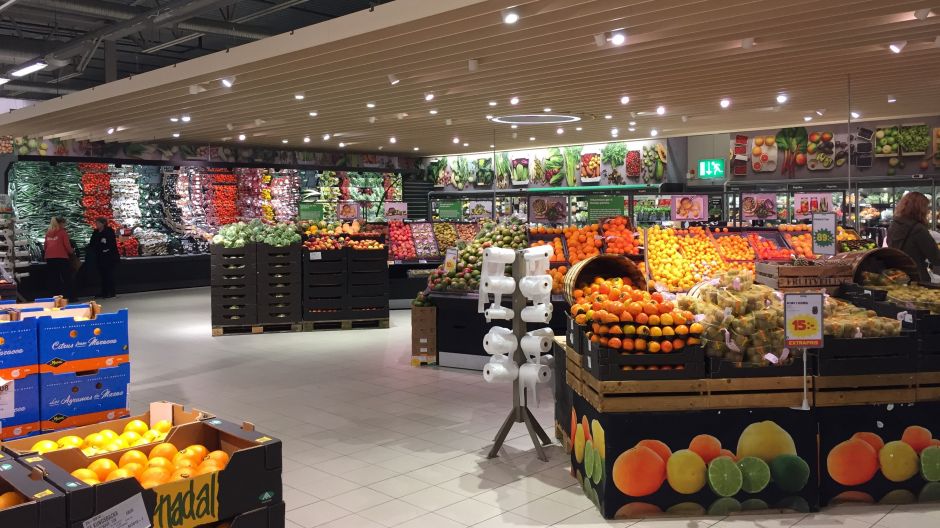 LZ Retailytics
The Fruit & Vegetables department has been widened after the revamp and is instrumental in communicating Stora Coop’s fresh food focus
To make room for the plentiful fresh food departments, non-food was reduced to a few key categories including children, kitchen, home and seasonal. These sections were clearly segregated and together with health & beauty, flowers and fruit & vegetables made up the initial sections of the store. The DIY department that previously claimed around a third of the store has been converted to a Bolist store (a DIY franchise) but the space is still owned and operated by Coop. Other ways the retailer has filled excess space following the reduction of non-food has been to rent out space to pharmacies and other external partners such as  garden specialist Plantagen; and by introducing larger pre-store areas offering useful services and foodservice. With click & collect likely to come soon, according to Mattsson, some storage and fulfilment space will likely be dedicated to that in the near future. 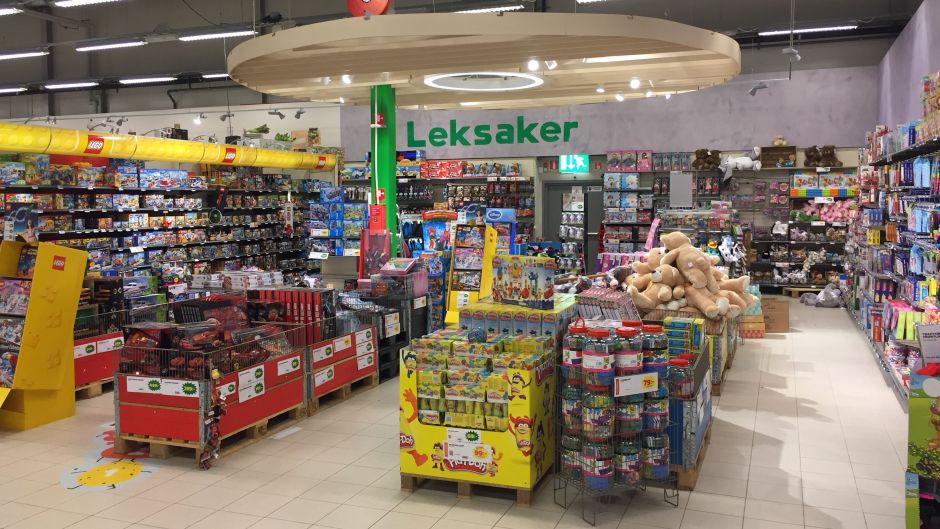 LZ Retailytics
The toy section, like all non-food categories, has a wooden circle spanning overhead to create a sense of it being its own mini-world. Normally, all products for children including baby products and toys are grouped together in one department.

The retailer is also underlining its focus on sustainability in the new concept. A “Together we make Sweden greener” stand is unmissable in the main aisle. Here, Coop displays bi-weekly promotions of its organic private label range, Änglamark. There’s also Coop Väst’s own initiative of a “Green Room” filled with organic ambient items, as well as shelf talkers providing further clarity as to which products are organic. 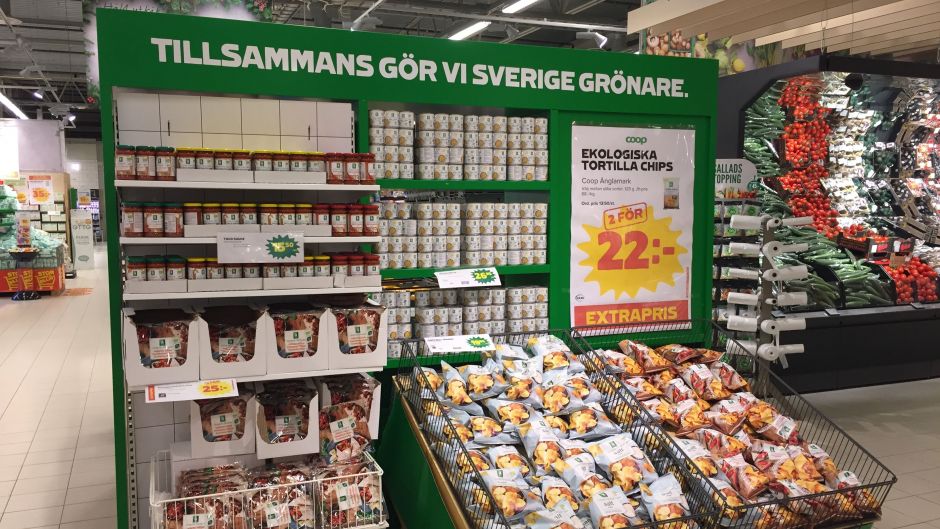 Coop Sverige is not only overhauling its hypermarkets but its supermarkets and minimarkets as well, along with renaming them and consolidating four grocery banners into three. This is being done with the intention of delivering a consistent brand experience regardless of the format a shopper goes to. The same elements can be found in a supermarket and hypermarket alike, just on a smaller scale, as we witnessed in the Coop supermarket in Mölnlycke we also visited.

It’s a competitive advantage that the retailer, following its reorganisation to centralise the business, can appear as a strong national entity; and it's obvious that Coop Sverige is now capitalising on this fact in its converted stores. LZ Retailytics believes this consistency will boost both Coop’s brand image and its sales trajectory going forward. If previously some Swedish shoppers were confused as to what Coop is and stands for, the new concepts make this very clear: great food stores with a strong fresh focus. 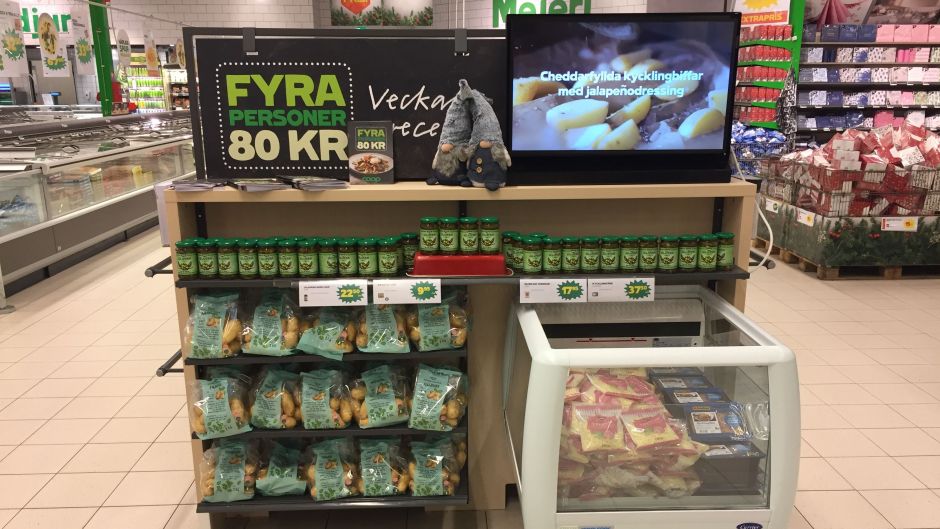 LZ Retailytics
The retailer has introduced meals for four people costing less than SEK80 (EUR8.45) which are being featured in bi-weekly national TV commercials. All the ingredients can then be found co-merchandised together in the stores.

The selected non-food categories which have remained in the assortment also all make sense. They either have a high affinity with Stora Coop’s main target group of families with children; are complementary to the food assortment; or provide an impulse shopping factor that cannot be replicated online.

Mattsson revealed that converted stores have experienced an improved performance. In particular, the improved stores have attracted more younger shoppers, many of whom have also become members. This is hardly surprising since Coop has long had the pre-requisites for attracting this target group – with its leading organic food position and wide assortment of special interest food. However, the modernisation of the brand and stores may have provided the necessary trigger for many shoppers to consider Coop as an alternative. LZ Retailytics forecasts that Stora Coop will be able to further build on this potential in the coming years and thus boost its sales per square metre. 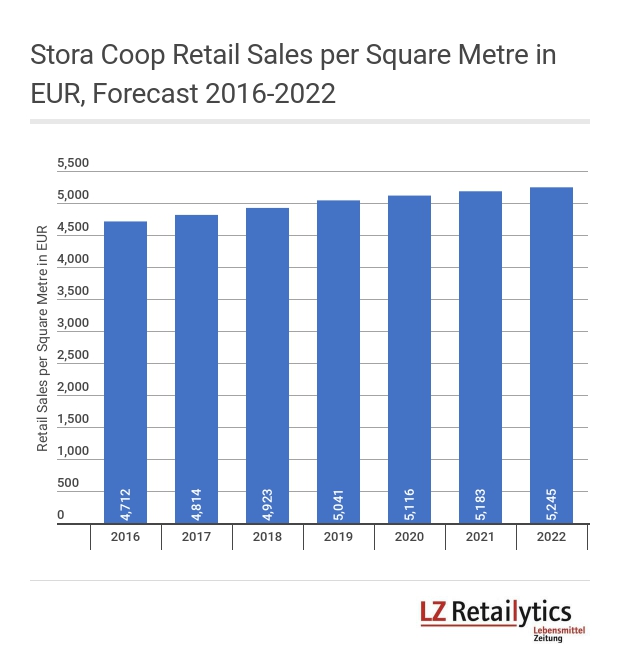 Following up on its national marketing campaign through in-store activity is another factor which we believe Coop gets right. The changing shelves for organic promotions, national promotions and meals under SEK80 can all be seen in national marketing and serve as destination categories and surprise elements when in store. With its wide fruit & vegetables sections and comprehensive service counters it further delivers on its fresh promise. The thorough use of the green colour on gondola ends, in-store navigation materials and overhead marketing also strongly contribute to this image and link the stores to the brand. The retailer’s strengths within organic are well displayed, although more dedicated showcasing of areas such as vegan/vegetarian and local food could be ways of showing off its strengths even further.

To sum up, we believe that Coop Sverige has developed a hypermarket concept that is well equipped to meet the well versed challenges of this format. This becomes even more important as competing Swedish big box operators (and discounters) are also working to revamp their concepts as our readers can see in our other Swedish store tour articles:

For those who want to know even more, data and strategic comparisons for all Swedish grocery retailers and their banners is available to our subscribers at retailytics.com.