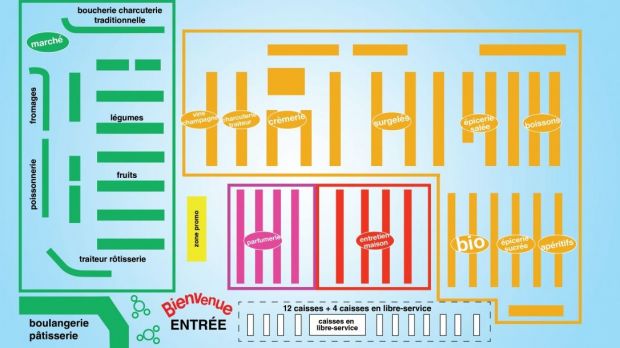 Photo: Cora France
Store plan of the new Cora hypermarket shows in green the big fresh food market area.
Louis Delhaize’s hypermarket banner Cora opened a new store in France, the first for 21 years, LSA reports. The hypermarket is located in Bourgoin-Jallieu, in the region of Lyon. Sized at 3,300 sq m, the store has a reduced non-food assortment which focuses on household goods and health & beauty items. Additionally, there is a dedicated pet shop within the store, tapping into the assortment from Cora’s sister company Animalis. The store's main focus is on fresh food, including serviced counters.

The Exception to the Rule

To us, this development is interesting as it is an extreme example of the current hypermarket trend in France, and an exception to the wider strategy of Louis Delhaize. This store is the first opening in two decades of a Cora hypermarket in France, which comes in parallel with a clear slowdown of new openings in the channel over the past three years, LZ Retailytics data shows. Development of other retail channels, market saturation, and demographic changes are hitting large hypermarkets in particular.

Unsurprisingly, the new Cora store is nearly three times smaller than the average store to date, echoing the more compact recent openings recorded by Carrefour, Auchan and the like. Space has been reduced for non-food categories, favouring seasonal items and categories that are less likely to be bought online. According to LZ Retailytics forecasts, all large French hypermarket operators are expected to reduce their average sales area by 2022. Meanwhile store-owner cooperatives, traditionally operating hypermarkets below 5,000 sq m, will post flat or upward evolution during the period, LZ Retailytics predicts.

Overall, Louis Delhaize’s hypermarket banner is very conservative in terms of store openings, not only in France but also abroad. No planned expansion has been announced in its home market of Belgium and neither for its third largest market, Romania. Cora has decided to put bricks and mortar expansion on hold there, focusing instead on rolling out its e-commerce offer. The strategy may pay off as Cora is recognised as being an early mover in the channel in Romania.