In Norway, Europe’s discount-densest country, entry-price stores will continue to outgrow other grocery formats, LZ Retailytics forecasts show. Despite already claiming around 53% of total grocery turnover in the country, the discount channel is expected to grow by another 15% over the period 2017-2022. This significantly outshines the development of the other main grocery channels – supermarkets (+12%), hypermarkets (+6%) and minimarkets (+1.6%) – over the same period.

In the race to become the preferred best value provider, the big 3 comprising Norgesgruppen, Coop Norge and Reitangruppen are all focusing on expanding and revamping their discount banners. Norgesgruppen’s Kiwi and Coop’s Extra are expected to be the country’s foremost performers, both forecasted to increase their turnover by around 17% between 2017 and 2022. 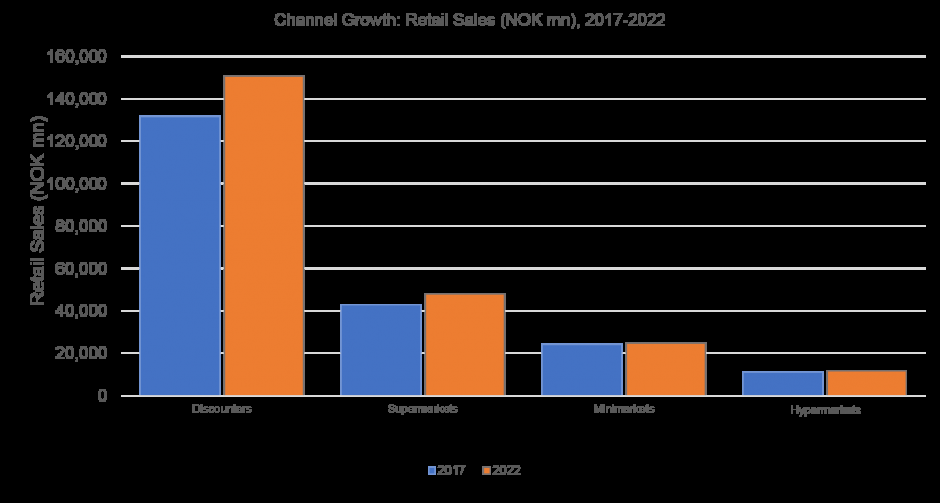 LZ Retailytics
The discount channel continues to outgrow the other major grocery channels in Norway.

So why is it that discount continues to be the most popular grocery channel in one of Europe’s wealthiest countries? Many believe the high prices in the country fuel the Norwegians’ desire for the cheapest alternative. This is part of the truth. To be fair, the high grocery prices are matched by an equally high income level. According to LZ Retailytics, SSB and SCB data, around 8.5% of an average Norwegian salary is spent on grocery purchasing compared to 7% in Sweden.

Even so, it is always the price perception that matters and Norwegian shoppers are fully aware of the much cheaper prices just a short day trip away, across the border to Sweden or by ferry to Denmark. So much so, that 5.5% of the total grocery retail sales value is generated on the other side of the border. The only way to even get close to those Swedish and Danish prices is through a discount concept.

Another reason for the high discount share is Norgesgruppen’s dominant position in the country, with a 40% share (source: LZ Retailytics), giving it clear economies of scale for buying. Competitors have been forced to resort to discount concepts to keep up with its prices. Players such as Schwarz Group and Ica Gruppen couldn’t even sustain that in the long run, unable to leverage their international buying power due to tariffs; and had to exit the market. Norgesgruppen has responded with its own Kiwi discount banner to eliminate the most imminent threat from its competitors. 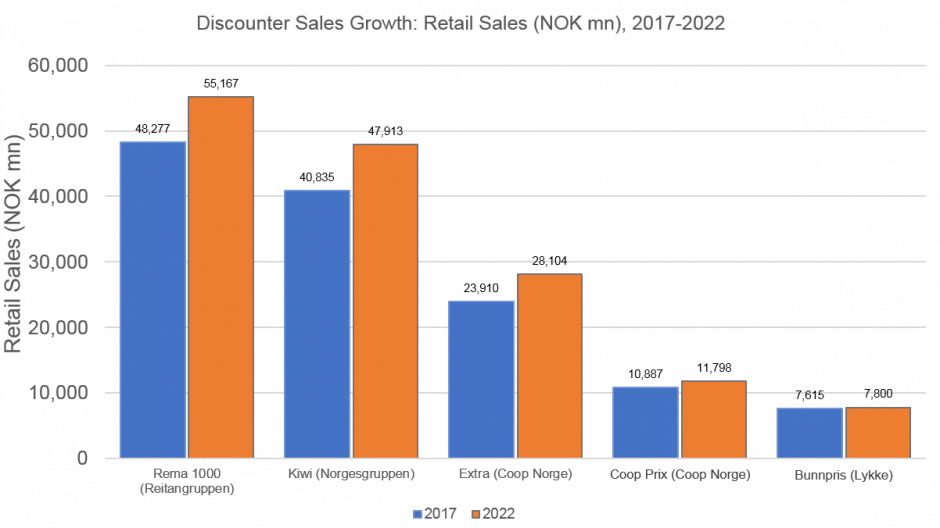 LZ Retailytics
The discount channel leaders are forecast to continue displaying the strongest growth in the years to come.

The market structure also plays its part in catering for a discount domination. The several small cities and towns have rendered hypermarkets a rare sight and the proximity-focussed discounters take over their traditional low-price role.

For the record, the Norwegian discounters are soft by international standards. They stock more SKUs than we’re used to from a discounter; have relatively low private label penetration; and spice up their EDLP strategy with price promotions and loyalty programmes. The no-frills thinking is in place though.

It seems that this is just the way Norwegian shoppers like it. Rema 1000’s recent acceleration of its focussed assortment strategy, delisting for example most Coca-Cola products and several domestic beer suppliers, was met with loud protests from both shoppers and the media. The retailer’s Communication Director, Mette Fossum confirmed to the newspaper VG that it “had challenges related to changes in the assortment this winter” but that “a lesser known reason for the numbers is that we have sold more and more of our lower priced private labels”.

Due to the above events, flat like-for-likes in 2016 and an already dominating sales per square metre figure, our forecast for the next couple of years shows a more modest growth for Rema 1000 than in previous years. However, we still expect its strategy to pay off in the long term as a focussed assortment lends high credibility to the statement of being the cheapest. One that none of its competitors can currently match.

While Rema 1000 is improving its buying volumes by buying up small suppliers and expanding private labels, the general trend in the market is to premiumise. Norgesgruppen’s Kiwi is focussing on revamping its Kiwi stores to become more supermarket-like, with a wider fresh assortment. Coop Norge has placed all its bets on its Extra banner, with the widest assortment of all discounters, having converted several supermarkets and many of its harder discount Coop Prix stores to this concept. According to the retailer, converted stores have experienced significant sales increases.

Driven by refurbishments, marketing and an updated assortment, these two players are forecasted to generate high like-for-like sales over the next five years. LZ Retailytics forecasts this to be 9.6% for Extra and 13.5% for Kiwi. Even so, the strong price obsession to gain market share is expected to continue in the country. This, together with all the price comparison battles in social media, huge loyalty card discounts on fruit & vegetables and other marketing stunts that come with it. In other words, the discount war is set to go on for the foreseeable future.