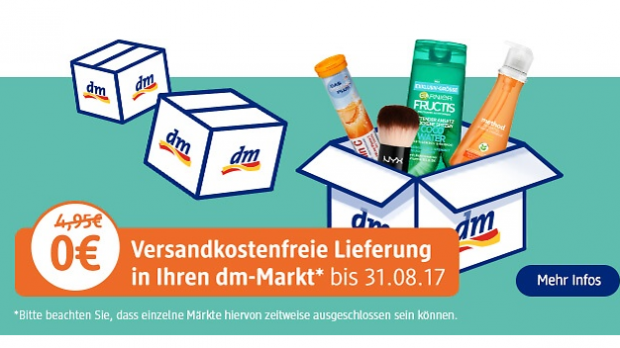 German drugstore operator dm has started to test a free click & collect service, Lebensmittel Zeitung reports. Until now, dm charged its customers EUR4.95 for instore pick-up but the drugstore operator is currently testing a charge-free option until the end of August, before any potential roll-out.

According to Christoph Werner, Head of Marketing and Procurement, only a few customers had chosen the click & collect option before. Shortly after the start of the free instore pick-up trial, the number of customers using the service increased significantly.

While dm has just started to test the waters, competitor Rossmann is already one step ahead. Germany’s second largest drugstore operator experimented with free instore collection earlier this year and has already drawn conclusions: introducing a EUR20 minimum basket size.

Getting rid of the fee for picking up orders instore is a sensible decision and the fact that in the past only a few customers were willing to be charged EUR4.95 to use the service is utterly understandable. At a time when customers are less and less willing to pay an extra for home delivery, a fee for an order they must pick up instore anyway is even less attractive.

However, the increasing number of click & collect orders since the start of the trial – according to dm –  gives the impression that there could be a demand for click & collect. We assume that the increase comes from a very low base and that it is unlikely to rise significantly any time soon – at least, until the online shop does not offer a wider assortment than the stores. The only exceptions are currently some new launches that are initially only available online. Furthermore, a shopping trip at dm does not really have to be a time-consuming experience. With an average store size of around 600 square metres and low shelves equipped with clear labelling, it is unlikely that customers save a great amount of time when making use of dm’s click & collect service instead of directly shopping in one of its physical outlets.

The reasons for dm to push the service nevertheless are obvious. It is likely that the drugstore operator hopes to reduce logistics costs which decrease with the amount of orders delivered to one place. According to Christoph Werner, dm also hopes that customers, who pick up their order instore, will top up their purchase with additional goods. We could think of shoppers buying unexciting items like toilet paper online and then adding products like cosmetics instore. In fact, these are items customers would like to first sample before they make a buying decision. However, even in this configuration, is it truly less of an effort to use two individual channels? We doubt it.

The true motivation behind dm’s U-turn may be the decision of Rossmann to offer free click & collect for its online shop this year. It is likely, that dm is not willing to fall behind the arch rival in this regard. One could get the impression that after dm’s late start in the e-commerce business, the battle between the two leading drugstore players has now also reached the worldwide web.

However, it appears that dm is in better shape than its arch rival. Even though Rossmann’s web shop was launched nearly 20 years ago, dm is already generating more turnover. According to LZ Retailytics data, dm quadrupled the turnover of its online shop in 2016 to EUR26mn. At the same time, Rossmann has been struggling when it comes to growing sales of its online shop after decreasing and stagnating sales in 2014 and 2015, before a 7% hike to around EUR25mn in 2016. In our opinion, this is unlikely to be sufficient for Rossmann to keep pace with dm’s growth going forward.