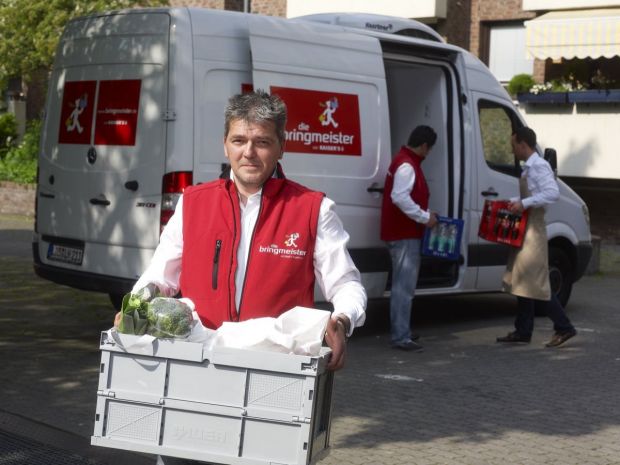 Photo: Tengelmann
Edeka inherited Bringmeister from Kaiser's Tengelmann.
Co-operative Edeka expects to further step up investment into its network this year, Germany’s leading grocer said at the presentation of its 2016 financial results. After investing EUR1.5bn in 2016, this year will see EUR1.9bn channeled into the infrastructure of the retailer, which is only present in Germany.

Alongside the expansion and modernisation of its centrally managed Netto Marken-Discount network, the further strengthening of its full-range business including the independent shopkeepers remains at the very heart of the group. This includes the integration of 335 stores acquired from Kaiser’s Tengelmann, which will be completed by May.

Hamburg-based Edeka detailed its ambitions in the drugstore sector, following a cooperation agreement with local incumbent Budnikowsky announced in February. Up to 50 stores could be opened annually, Edeka CEO Markus Mosa said. Expansion is expected in the north of Germany first, before then heading south. It is unclear whether this will happen under the Budni banner, which is only well known to date in the greater Hamburg area.

In e-commerce, Mosa claims to want to close the gap between Edeka and arch rival Rewe Group, which has been pouring large amounts of money and manpower into its grocery e-commerce operations recently. “At the end of the year, our online turnover is expected to be at the level of our Cologne-based competitor,” Mosa said. This will be mainly thanks to the extension of the Olivia e-store platform for independent shopkeepers, as well as investment in Bringmeister, a home delivery service it inherited from the Kaiser’s Tengelmann acquisition.

Traditional co-operative Edeka will be focussing on areas beyond its traditional grocery stores this year as it backs e-commerce and drugstores. That, at least, is the impression that the statements of CEO Markus Mosa have given. So let’s look at the figures: a single-digit million sum is initially earmarked for the drugstore co-operation, while a double-digit million amount will flow into the e-commerce venture. That's not so impressive, when compared with a total investment of nearly EUR2bn.

The problem is that, Olivia aside, both centrally managed projects do not financially benefit the group’s independents, which are its owners after all. On the contrary, the projects establish internal competitors.

Bringmeister is a loss-making division with gross sales of EUR18mn in 2015 (according to LZ Retailytics data) and a presence limited to just two cities. This compares and competes with the far more ambitious Rewe delivery services which operate in 75 cities, as well as a forthcoming price aggressive Kaufland service in Berlin. Bringmeister will remain a construction site and experimentation field for a very long time. Edeka’s plans to make it profitable first and then roll it out seem fairly implausible in this context.

Its plan for drugstores sounds more promising. In the past, both Edeka and Rewe tried and failed with their own drugstore chains, named Elkos and Idea and Sconti, respectively. Rewe is in fact going through a difficult time with its Bipa drugstores in Austria right now.

However, teaming up with an existing player that is well established in its homeland addresses the issue of category competence. This is what German supermarkets generally lack when compared to the leading drugstore chains in the country. Beyond this, it offers the chance to support the venture with a vision and an elaborated philosophy – because that is what drives much of the personal commitment found amongst staff, management and the owning families of dm, Rossmann and Budni. Even if it doesn’t have to be Goethe in all Edeka stores.

In the mid to long term, there could even be the opportunity to involve and later integrate Müller – the third player in the drugstore league – should it continue to struggle to find a viable successor for its top leader. Müller would be a perfect geographic fit – weak in the north, strong in the south. Switching from Markant to Edeka in buying could also weaken the drugstore leaders.

The ‘new’ Budni would be backed comfortably by Edeka to fight out price wars with enraged dm and Rossmann. Anyway, now that expansion at the latter is nearing a point of saturation, price wars will also be of less interest for them. Rather than generating better economies of scale in a mature market, securing margins to finance expansion abroad could become more important. Which would leave Budni some room to play.