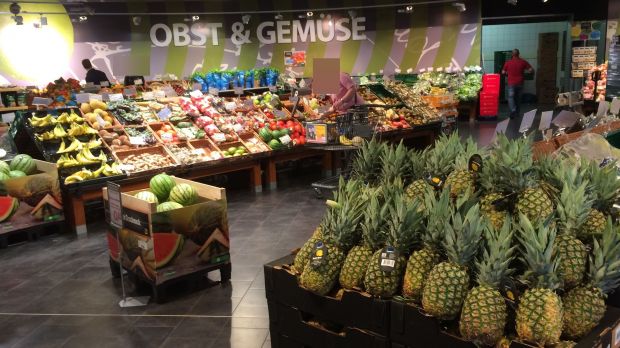 Edeka is increasing its efforts to combat the leading German discounters in fresh fruit and vegetables. According to Lebensmittel Zeitung, this week the German market leader is starting to roll out its Gut & Günstig economy private label in the category, which has recently lost sales to the discounters, namely Aldi. Earlier this year Aldi Süd followed Aldi Nord, in a move to introduce loose fruit and vegetables, rather than only selling it pre-packed or as single items.

Starting this week, a range of 20 basic products – including bananas, apples, clementines, oranges and tomatoes – can be ordered by the independent shopkeepers. Not all will make use of the offer, though, as some are said to be happy with their existing range. Gut & Günstig was introduced in the category back in 2014 as a test. Earlier trials some 15 years ago failed primarily due to quality concerns and problems with procurement of the correct quantities.

At the same time, the discounters are reportedly upping their game in organic foods. Aldi Süd now has some 250 products, Aldi Nord 180 items and Lidl 150 SKUs; which compares with Edeka Netto's differing assertions of anything from more than 200, or 230 products (both figures from their website), up to 280 (LZ) or 480 products (from this week's leaflet).

Fruit and vegetables, that’s the showpiece of every grocery store. Particularly when you boast about your freshness, your variety, your convenience, your service, in contrast to the discounters. But the discounters, never idle, are making up leeway and shrinking the gap with the supermarkets, so that the supermarkets themselves will need to develop further. However, this evolution cannot only go upmarket, retailers will also need to make sure the lower end is well served too.

Edeka is not inexperienced in this regard – remember that they have their own discount banner with some 4,300 outlets throughout Germany. Every other week or so, you will find Netto bananas and other basics on special offer, at prices lower than Aldi’s. Why shouldn’t the independents’ supermarkets offer the same? Especially as the category is sourced through the same company-owned Fruchtkontor import and distribution facilities.

Reportedly, Gut & Günstig already accounts for nearly a quarter of the category sales for some independents who recently listed the range. That said: “Since Aldi (Süd) has been selling loose fruit and vegetables, and has started advertising it, fewer single households are shopping with us,” an Edeka shopkeeper is quoted as saying in the article. Aldi Nord has been selling loose items for many years, but Süd only followed suit earlier this year – up until then shunning the additional delay caused by weighing goods at the checkouts on expensive, high-maintenance scales. But since the introduction, Aldi Süd has been advertising it heavily.

Edeka’s move is another example of how well-functioning competition can cross-fertilise. When discounter Lidl introduced fresh fish a couple of years ago, it was Edeka, as the full-service provider, that reacted with a more sophisticated offer. All discounters are now extending their organic foods offer - Netto claims to have as many as 480 organic products on its shelves, while the supermarkets are looking to do the same. And this time, it is the value-for-money positioning that gets a new boost… So, is it really mutual fertilisation? Or does it only go one way? On second glance, one would most likely conclude that it’s actually the discounters that are once again pushing at the big supermarket operators.