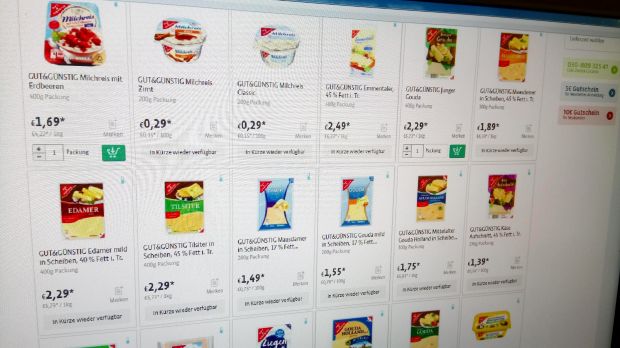 Kaufland’s discontinuation of its home delivery service at short notice has brought competitor Bringmeister temporary troubles. As reported by Lebensmittel Zeitung, the Edeka-owned service provider fell short of various key food items in the important week running up to Christmas, with economy-priced staples in particular absent from its online offer in Berlin.

“The demand by far exceeds our planning for the Christmas period,” an unnamed Edeka employee is quoted as saying. Edeka formally inherited the Bringmeister delivery service last year when the authorities cleared the acquisition of the Kaiser’s-Tengelmann supermarket division from Tengelmann. Bringmeister is active in Berlin and Munich. Schwarz Group’s Kaufland announced the discontinuation of its home delivery pilot in Berlin in early December 2017, after less than 15 months of service.

The boom is over, it seems, before it has even really started. In December Kaufland announced the discontinuation of its delivery service for groceries in Berlin, with last orders being supplied on 23 December – in time for the last Christmas orders, one may have thought. However, the withdrawal of orders was already placed much earlier – catching its competitors out. We don’t know anything about Rewe.de, the Rewe Group’s food online shop; and how product availability was affected there. But for Edeka’s Bringmeister, the impact was chaos.

In some product groups, more than half of the assortment was temporarily unavailable. As tested by LZ Retailytics on 20 December late afternoon, only 26 ‘bread rolls and baguettes’ products were available, out of 64 in total. Eggs: 2 out of 8 products. Soft cheeses: 31 out of 60, including own brands and manufacturer brands. The situation looked better in long-life categories such as preserves. In addition to many top brands such as Ferrero confectionery and Müller dairy, it was largely the economy private label Gut & Günstig – Edeka’s range of discount-priced ‘Aldinatives’ – that was sold out. As is widely recognised, these are the most important products in German grocery retailing: if you don’t have cheap flour and sugar and cheese, nor potatoes and oranges, you may as well not open your store at all – being out-of-stock on the basics is a nightmare for every manager on the shop floor.

Edeka’s Bringmeister didn’t have them on the Wednesday before Christmas, at least temporarily – which was a blow for its enormous efforts to make the banner price-competitive, attempting to get away from its image as a service for the more affluent dating back to its Tengelmann times. Imagine there are hundreds, if not thousands, of customers switching over following the discontinuation of a competitor banner – but you cannot service them. What a wasted opportunity. Kaufland’s decision was short notice indeed, but there would still have been 12 days for Bringmeister to prepare.

“The demand by far exceeds our planning for the Christmas period,” an employee from Edeka said. Which could indicate that the demand side might no longer be a problem, right? Kaufland was out for the masses, trying to turn the so far rather elitist home delivery concept into a democratic feature – why else would it have plastered house walls at Hermannplatz in Berlin Neukölln, a problem area with less affluent inhabitants, with its huge Kaufland.de advertisements? One can assume that large parts of the clientele of the big-box discounter were people who wouldn’t have shopped online with the other supermarkets. An assumption, yes, but supported by the fact that it was mainly the cheapest products that were missing at Bringmeister.

What does this mean? The remaining grocery home delivery services – which are Bringmeister, Rewe.de and Amazon Fresh in Berlin and Munich – have two options. The first would be to remain price competitive, matching prices to those instore, with the quasi full range of economy products. The upside: this would attract the masses, just like Kaufland tried to, in a discount-driven grocery market, and popularise the concept. The downside: the low margins and losses over losses. Alternatively, the retailers could raise their online prices, bidding auf wiedersehen to a significant part of their existing and potential customer base, i.e. sacrificing volume for the sake of margins, and … some day … profits.

Looking at the three - none of them is a genuinely price-aggressive retailer – in spite of its general reputation, Amazon's focus in food is on delicatessen and organic, think Whole Foods Market, not discount staples. It might look tempting to find a 'gentlemen's agreement' on higher prices in order to reduce losses, especially since going for the mass market would only exacerbate the situation - the higher the turnover, the higher the losses. But to go for the moneyed only is a risky route, maybe less so in affluent Munich, but surely in less fortunate Berlin. 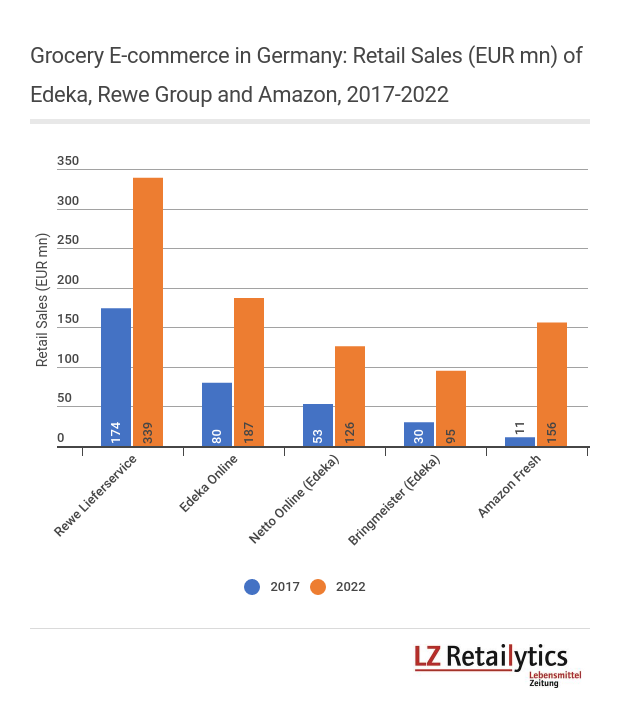 LZ Retailytics
After Kaufland suddenly left the scene, it is Edeka, Rewe Group and Amazon, with Amazon Fresh, that fight for the lead in grocery e-commerce in Germany. Sales for 2022 are forecasted to grow significantly, coming from a very low level.