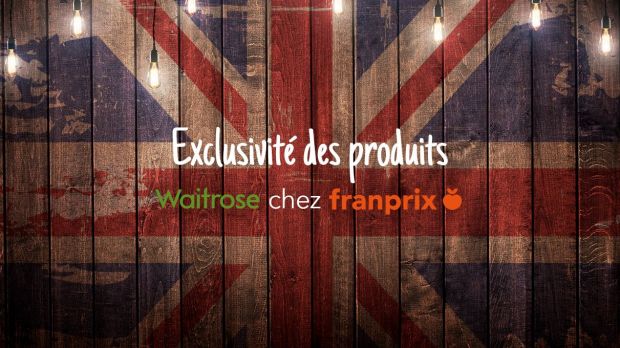 Photo: Waitrose
Foreign brand importer Mediascore Food is the origin of the partnership between Waitrose and Franprix.
A selection of own-branded goods from the UK upscale supermarket chain Waitrose has landed on the shelves of Groupe Casino's French supermarket banner Franprix, trade magazine Linéaires reports. To date, the agreement covers 33 products, which are mainly iconic British food items including lemon curd, shortbread, cheddar cheese, cookies and crisps. Different Waitrose ranges are represented, the standard range Essential Waitrose, organic Duchy Organic, healthy Waitrose Love Life as well as premium Waitrose 1. Pricing for the items is reportedly comparatively high, above equivalent French leading brands. The agreement between the two retailers is to run for one year and could be widened to include up to 60 products in the coming months.

Foreign tie-ups between retailers wishing to leverage their brand  image and private label quality has become quite a trend. Among numerous examples we can think of Carrefour products listed by Ocado in the UK, and Finnish retailer Kesko selling its private labels to Lenta. Waitrose is no exception and is actively exporting its lines across the four corners of the world, reaping the rewards of its strong brand image and reputation for quality. Waitrose products find their way to premium supermarket chains, as it did at Coop Danmark's Irma supermarkets. Often regarded as Waitrose's French counterpart, Monoprix would have been a logical choice. It is indeed particularly fond of premium, exotic products and exclusive lines.

This time, the honour fell surprisingly on Monoprix' sister supermarket chain, Franprix. The move is understood to be the result of latter's recent move upmarket, which may raise concerns in term of some overlapping between Groupe Casino's two banners. Operating for the most part in the Greater Paris area, Franprix will capitalise on the custom of numerous British ex-pats as well as cosmopolitan Parisian customers. The new product line should also help to differentiate its assortment from the competition, partially at least. Although consumers seeking British products can also find refuge at the handful of Marks & Spencer stores that are still dotting the French capital city.

The move by Franprix may indicate that it is tempted to get a slice of this niche, but the limited assortment and the initial one-year contract for now seems to indicate more of a limited pilot with Waitrose, rather than a true strategic commitment to the banner. After all, Groupe Casino itself is known for the wide range and diversity of its private label lines. They range from discount lines such as Le Prix Gagnant to high-end ranges Monoprix Gourmet; From French regional products to exotic items sourced from the own-brand assortment of its overseas operations in Latin America.

For Waitrose, the move will help with the John Lewis Partnership's strategic goal of building new revenue streams, which includes shop in shop models, wholesale and online tie-ups worldwide to leverage the strength of its well-known brands. Fortunately for Waitrose, Groupe Casino did not list cookies of the organic brand founded by His Royal Highness the Prince of Wales... until recently that is.