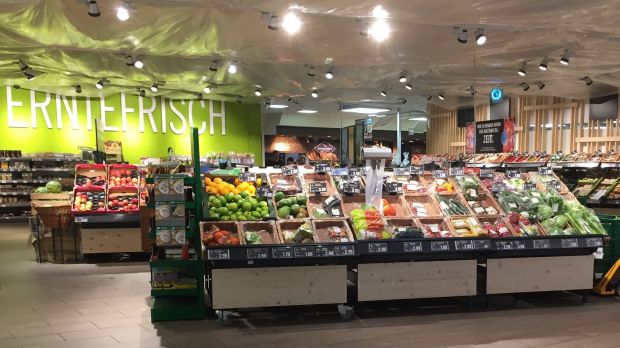 The grocers in Germany are sanguine about what to expect in 2018, a survey by Lebensmittel Zeitung has found. The macroeconomic situation looks positive, if not rosy, with regards to employment numbers and spending power development. However, according to some retailers, less positive influences will include increasing costs due to higher energy duties and the standstill in the formation of a German government, which has been dragging on since last September.

According to the survey, innovations that were overturned again last year show that, while all-rounders Amazon and Alibaba remain a growing threat, the big business will continue to be made in the stationary operations, i.e. in the retailers’ physical stores. There, the main threat will continue to come from the cost side, as it has for many decades, driven by the discounters. LZ also suggests that demands regarding food quality and healthy eating will increase rather than abate.

Just as consumers return to their virtues of economy and healthy lifestyles in January, following the festivities, retailers enter the new year with new cost cutting ideas, addressing the issues that concern them most. Rewe Group may have a new CEO this year, Lionel Souque, but in the LZ survey, he repeats his predecessor’s concerns regarding unequal taxes for international online retailers (Amazon, that is) and stationary grocers (Rewe Group, that is). Furthermore, its reallocation charge for renewable energies has allegedly climbed from EUR10mn seven years ago to EUR100mn today, according to the Cologne-based retailer.

Retailers suggest in the survey that competition has further intensified (do we remember a year in which it hasn’t?). Gert Schambach, executive partner of regional player Dohle, which is associated with Rewe Group, provides three reasons for this development: “This is indicated, among others, by the numerous sales declines for top brands on a broad basis, the radical reshuffle of the business systems at Aldi and Kaufland, as well as the market exit of Tengelmann, Coop and Tegut, at least as independent companies.”

Indeed, the listing of leading brands at Aldi has impacted the industry to a much larger degree than the launch of Amazon Fresh in Germany during the past year. And it is not predictable at this point how far the brand range will be extended at the world’s leading discount operator. Aldi is now spending vast sums of money on store re-designs and marketing, including, most recently, TV spots for promotional non-food items. But the discounter says it does so at the expense of its margins, not thanks to higher prices: “Since we maintain our price level to defend our outstanding position here despite the investment measures, we are preliminarily accepting a slowed-down growth of profits,” says Aldi Süd.

Still, of course, some may argue, consumers will pay indirectly for the range extensions and higher complexities as a result of a lower turnaround per item and higher overheads. For competitors, however, this could be slightly positive news in the longer term. Edeka, meanwhile, responds to the cost pressure with rather symbolic acts. These include the merger of business departments and the plea for more cost discipline.

Remarkable is the confidence in the stationary business at virtually all grocers. This may simply be perhaps because they don’t know any better – all grocery e-commerce attempts have so far been of limited success at best, if not discontinued completely. “In ten years, grocery retail is still going to be dominated by bricks-and-mortar stores,” knows – or perhaps hopes – Edeka. The market leader had approximately 13,650 stores at the end of 2017, according to preliminary LZ Retailytics figures – that is more than Schwarz Group’s Lidl and Kaufland in all of their 27 European markets plus USA added together.

Another issue will be demands from consumer watchdogs, unions and politicians to manufacturers and retailers. These will address long-standing issues regarding healthy eating, the discussion about sugars and fats and their connection with obesity, diabetes and other diseases – a relationship that, by the way, is disputed by quite a significant number of industry lobbyists. It is understandable why they would contest any such inter-relationship; and they are right as there is rarely one single trigger for a problem. It’s rarely the single can of cola or the piece of chocolate that makes you fat. And if you run a marathon every day, you may even have a few dozen of them without serious consequences.

However: a head-in-the-sand, or passing-the-buck strategy of denial cannot ‘win’ long-term. Quite the contrary – it leaves one even less credible; and eventually out of the discussion. Therefore, if it is not the producers who deal with the issue properly and take concerns seriously (including the hysterical ones), it should be the retailers that do it for them. Strangely, the German retailers have traditionally been very quiet when it comes to this point. Other countries have more progressive grocers. Spar Austria, for example, speaks openly about its plans to reduce salt, for instance; and there are no complaints about flavourless food.

If the boss of a leading German retailer – with all their operations in up to 30 countries – proclaimed he wants no unnecessary salt, sugar or fat in the company’s private label products – wouldn’t you think all competitors and brand manufacturers would suddenly follow within months? You may tell me clean labelling is old hat. You’re right. But then tell me: why does my wholegrain bread, which is said to be so healthy, still contain ‘sugar beet molasses’ and ‘caramel syrup’? You say that’s still the only way to make it brown? Come on – welcome to 2018! 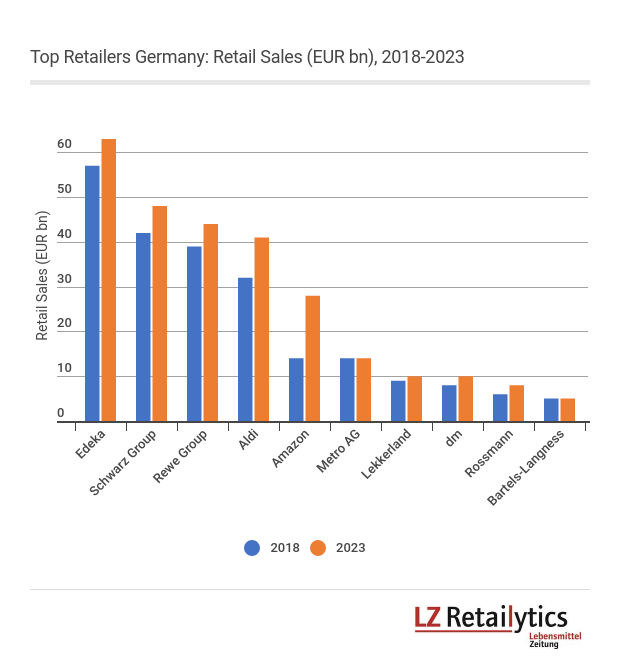 LZ Retailytics
In LZ Retailytics’ forecast for 2018 and 2023, the top four grocers in Germany will keep their distance from the smaller retailers; only e-commerce specialist Amazon will be closing the gap with the leading domestic players.
Topics: Dohle Edeka Schwarz Group Aldi Rewe Group