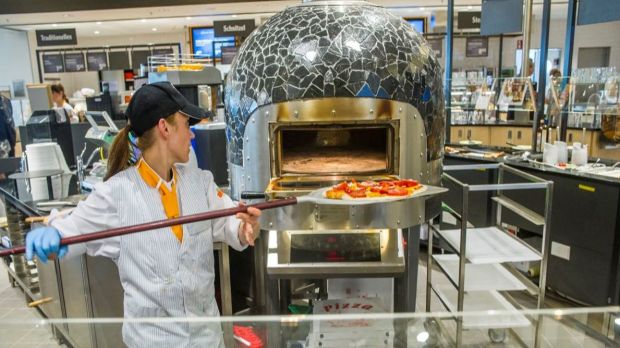 Photo: Lebensmittel Zeitung / Bostelmann
Globus was one of the first grocers in Germany to dedicate significant parts of its sales floor to foodservice elements.

German big-box operator Globus is facing increasing financial difficulties in its home market, Lebensmittel Zeitung reports. Having announced an extensive cost reduction plan at its last financial results, the medium-sized big box operator has now had to pay a high single-digit million Euro amount to competitor Real. This is due to a legal settlement following Globus’ acquisition of two Real hypermarkets without taking over the Real employees. Real had to come up with a redundancy package and went to court.

The settlement adds to the compensation Globus paid for the Real employees that it laid off. Globus did so for both of the acquired stores, even though it later sublet one of these to competitor Kaufland due to difficulties during the refurbishment process.

Furthermore, Globus discontinued its Drive format a couple of months ago, as well as closing one of its smallest hypermarkets recently. Its omnichannel concept Fridel has been put on ice too.

Globus has been one of the most interesting players in the German retail landscape. In contrast to most big-box operators, the medium-sized company somehow seemed to perfectly manage the balancing act between offering a high degree of service to differentiate from the competition, while still providing at least some of its ranges at discounter level pricing; delivering positive sales growth as well as an increase in customer frequency. It seemed as if it had found a magical way to develop, in contrast to competitors such as the ever-struggling Real. Globus’ strengths include maintaining local roots by focusing on specialities from the neighbourhood of the individual stores’ location; its instore production of food including meat and charcuterie; and its well-trained and well-paid store staff.

Due to increasing costs, the latter has now become more of a challenge than a differentiator in a market in which Globus has to compete with cost-efficient retailers such as Aldi and Lidl. The fact that Globus was one of the pioneers of the Drive concept in Germany also turned out to be more of a hurdle than a growth driver. Even though the Globus Drive sites were mostly located close to the border of the drive-enthusiast market of France, they did not show sufficiently positive results. The German market just doesn’t seem ready for this kind of concept yet. Supermarkets and discount stores are at every corner and make it so easy for shoppers to navigate through their assortments, that one of the main advantages of drive – convenience in terms of selection of goods – is simply not a game changer.

The fact that Globus had to close one of its smallest hypermarkets at the end of 2016 shows that even an attempt to downsize might not help to improve the situation. The Stockstadt store Globus had acquired from Real was perceived by many customers as one of the most enjoyable shopping facilities in the area and they were happy to find local specialities available in this outlet. However, this turned out not to be enough to turn the superstore into their number one shopping location. Even with its reduced sales area, it was still too big for a quick shopping trip. Although Globus offers products at discounter prices, the large assortment in combination with impulse buying decisions led to shoppers leaving the store with long receipts and the feeling that they had possibly spent too much money on their regular grocery shopping trip.

We cannot help ourselves thinking that Globus’s decision to now also put the roll-out of Fridel – an innovative omnichannel concept  – on ice reminds us a little of the story of its competitor Real. The Metro banner has tried various initiatives to increase its profitability. It currently plans to open its second Markthalle concept store with foodservice elements on the sales floor and a focus on fresh. According to Lebensmittel Zeitung, Boston Consulting Group will help with the roll-out plan. The reason for this is that, even though according to Metro and Real the first outlet is doing exceptionally well, it is also extremely expensive operationally. Whilst Markthalle might be a nice addition to Real’s portfolio – an extensive roll-out in Germany would not really help to change the situation for Metro’s problem child. This is also something the Globus example demonstrates as it was one of the first German players to dedicate significant parts of its sales floor to catering.