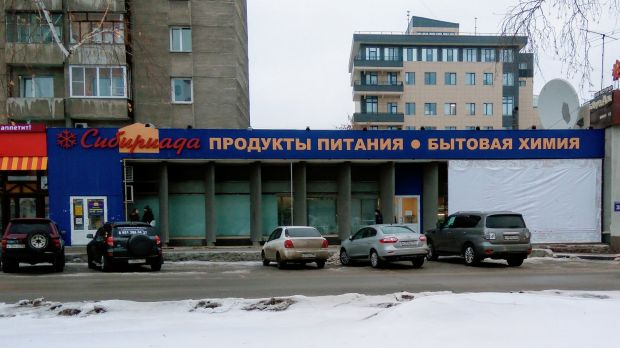 Photo: LZ Retailytics
With Holidey's store network of almost 500 outlets spread over half a dozen formats, the new strategic focus on the discount segment will allow the retailer to bundle resources and focus on local private label advantages.

Siberian multi-format retailer Holidey has launched a new hard discount concept under the ‘Boom’ (‘Бум’) brand. As disclosed by news portal Kontinent Sibir, the first seven stores are already open in Novosibirsk and the surrounding regions. The range comprises 600 items with extended shelf life from FMCG categories, many of them from the company’s ‘Vygodnaya Pokupka’ (‘Advantageous Purchase’) private label range, which is also present at the retailer’s soft-discounter Holdi.

As LZ Retailytics previously reported, local sources have hinted at a potential sale of Holidey’s long-standing store network, with the exception of its ‘Holdi’ soft discount banner. With the newly-founded 'Boom' chain the company would then operate exclusively in the discount channel.

Consolidating into a Discounter

There was no doubt that Holidey, with its multi-format store patchwork, would have to consolidate its market positioning and store portfolio. With the advance of X5, Magnit, Lenta, Okey and Auchan into the region – and the steadily growing presence of local player Maria-Ra – the retailer’s banners are feeling the pressure of channel peers which are several times its size.

The Novosibirsk-based company has chosen to take the same approach as big box operator Okey, who runs its own hard-discount network under the ‘Da!’ (‘Да!’) logo in Moscow. Whereas we see Okey’s move as an attempt to counterbalance its besieged large-format operations that will not reflect significantly in total revenue share over the next few years, for Holidey the situation might not look as pessimistic.

Holidey’s existing Holdi banner bears the ‘diskaunter’ mark in its logo but is steadily developing upmarket, evolving more into the soft-discount segment. Every future rouble invested into this format would mean a head-on price war with X5’s Pyaterochka, which has just opened a new distribution centre in Novosibirsk and is determined to take market share from existing players in the region.

Consequently, Holidey is going back to basics and undercutting Pyaterochka with its new Boom concept. Prices during the opening period were 20-30% lower than at sibling Holdi, owing primarily to the large number of locally produced private labels.

If the rumours are true, that by the end of the year Holiday will sell all of its larger formats, it would end up with two networks of discount stores – Holdi and Boom – while benefiting from a huge cash injection. Considering the mix of local expertise and international management – the CEO of Holdi is a former Aldi Süd manager – we are convinced that Holidey will not give up its home turf without a fight.

Gain access to more insights and forecasts for Holidey and more than 1,000 other banners across 40 European countries by subscribing to our retail intelligence platform or sign up here for a free trial.