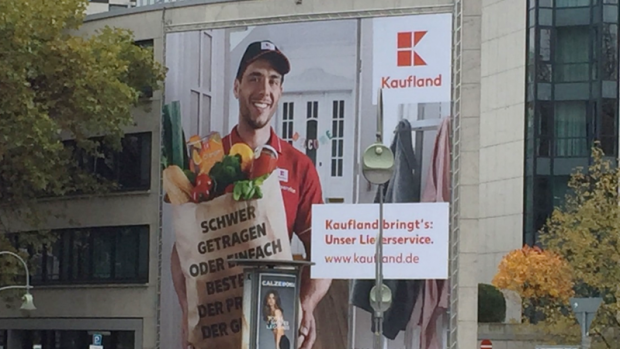 Photo: LZ Retailytics
When Kaufland launched the service one year ago, massive posters were plastered across Berlin to introduce it.

Schwarz Group’s big box banner Kaufland is to stop its grocery e-commerce venture, Lebensmittel Zeitung reports. The service is to be discontinued by 23 December as it was, according to the management, not possible to provide it in an economically viable way.

For one year, Lidl’s sister banner experimented with home delivery of groceries in Berlin. As reported earlier, the roll-out to other cities had already been put on hold.

When Kaufland launched its service one year ago, it was perceived as a potential game changer that could shake up the market. Its e-commerce operation has been one of the most price-aggressive offerings in the German food online universe. The web shop provides a large choice of Kaufland’s economy private label line with around 800 items available. Delivery costs are only EUR2.75 to EUR4.75 for purchases below EUR100, while it guarantees that prices would be the same as in its stores. ‘Same prices as offline’ – this is a promise we have already heard from competitor and German grocery e-commerce pioneer Rewe Group a couple of years ago. A promise that has first faded into the background, before being eliminated entirely, including the strapline being erased from its delivery vans.

The attempts to be affordable make sense as the German market is characterised by a very low average price and hence low margins for grocery items. The population consists of price-conscious shoppers that grew up with mighty discounters Aldi and Lidl in their neighbourhoods. If retailers want to encourage a large proportion of their customers to make use of their delivery services it is crucial that additional costs do not exceed whatever these customers are willing to pay. However, it appears to be impossible to create a balance between these two approaches, providing home delivery of food while retaining an affordable character.

Kaufland’s story is not the first to prove this point. After initial moves to broaden its grocery assortment, sister banner Lidl has also recently discontinued its offering of ambient food items. The Schwarz Group banner was actually the most daring value chain, we have not seen any other discounter making any relevant steps towards grocery e-commerce in the German market.

Learning from these developments and seeing other operators shifting their focus, it will be interesting to see how Edeka’s Bringmeister is to continue its business. The online shop also follows a rather price aggressive approach, but at the same time it is pushing additional services such as one-hour delivery time slots in Munich. In Berlin, Bringmeister also promises the same prices as instore. Delivery costs depend on the slot and vary from EUR3,00 to EUR7,00. It is probably only a question of time until this banner also decides to change its approach, assuming parent Edeka won’t ignore the cost structure of the business indefinitely. But what would this mean? Leaving the scene to Amazon Fresh - a provider that seems to be more than willing to make profit sacrifices.