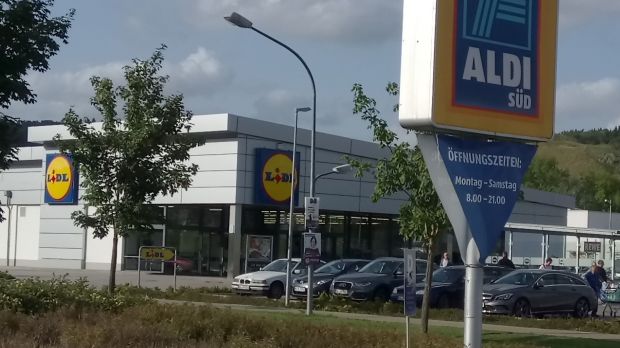 Photo: LZ Retailytics
Lidl faced criticism for x-ing out crosses on churches in its leaflets for Greek foods. This happened after Aldi Süd was attacked for showing a drawing of a mosque on a liquid soap.

Lidl has sparked a backlash on social media for offering children’s pyjamas that are considered to convey traditional role models. This week, the Schwarz Group-owned discounter is selling sleepsuits for girls, in pink, with the imprint ‘daddy is my superhero’; while the boys’ version in blue says ‘be your own superhero’. It is understood that the products are also being sold in various other markets as Lidl tends to roll out its non-food offer internationally. Twitter users labelled the offer as ‘problematic’, others chose more dramatic words, newspaper Die Welt reported.

The incident comes a few weeks after Lidl was repeatedly attacked internationally for removing the cross on church spires from photos promoting its Eridanous Greek food range, in leaflets and in an Italian store. Social media users, including politicians, preponderantly accused the discounter of denying the cultural heritage of Europe – and Greece – in favour of what they deemed a misinterpreted consideration for people from other cultures.

UK non-food retailer John Lewis, sister of Waitrose, has stopped dividing its own brand children’s clothes by gender; and others are following its example. Everyone should be self-confident to wear whatever she or he likes, instead of following pre-set gender clichés. That’s how the reasoning goes; and it sounds completely plausible and modern. After all, it happened to me more than once in a fashion store that it took me a minute or two to figure out that I was in the women’s department. Of course, it wouldn’t have mattered to me (who do you think I am?!) – if only the clothes had fit me.

But Lidl dropped a brick. Offering pink and blue clothing is gendering enough (Aldi Nord is also offering children’s pyjamas this week, in pink and blue). The long-learned colour code may be owed to the rather conventional, mainstream target group of the discounter, while we assume that Lidl is aware of the gender discussion. However, what was completely avoidable was the imprint: suggesting that sons will be strong on their own, while girls need an admired father for their intrinsic value – that’s too much, even for moderate, occasional feminists.

After crossing out the crosses: what is it that makes Lidl so seemingly insensitive towards the sensitivities of many? One thing is the indignation culture that has taken over parts of the social media. Every perceived misstep is being spread out across the internet, seldom rightly, often just to have 15 minutes of fame (and a good news story) and one day in the pillory for the retailer. The good thing is: it usually fades as fast as it has come.

The topics are delicate. When speaking about gender, about religion, about politics, whatever you say or do, there is always an argument against you for those who want to accuse you of moral wrongdoing. This is because various discourses overlap, the academic with the public and the rather vulgar one. Showing consideration is generally seen as positive – but this can backfire if people (shoppers) feel their identity is threatened.

Hence the ‘cross’ debate. I think there is a simple precedent as to why Lidl deleted them: some time ago, arch rival Aldi Süd received criticism for selling a liquid soap named ‘The Arabian Nights’, on which a small outline of a mosque was visible. Aldi, in its typical overcautious manner as I would say, apologised to a singular online complaint promising the product with the drawing of a place of worship wouldn’t be sold again. Case closed. I am quite sure this incident was a key reason why Lidl took off the crosses: no religious symbols on our products and publications!

But when removing a mosque is right, how can removing a cross be wrong? Is there no general rule for the ideal reaction? - I’m afraid not. The one issue is, as outlined, the broad variety of partly contradictory expectations that are easily spread through social media, no matter how relevant and consistent they are. The other problem, however, is that Lidl hasn’t yet understood what it is about. Just formulating and following simplistic internal rules doesn’t help much. More importantly than that, Lidl needs to cultivate sensitivity and intuition to understand how and when to apply them.