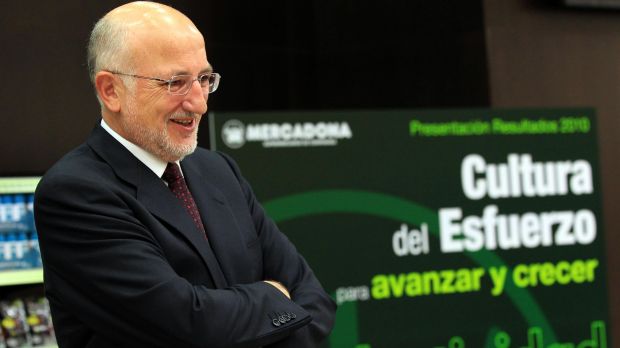 Photo: Mercadona2
Mercadona's CEO prepares for the future of the Spanish retail chain.

This year, Spanish market leader Mercadona plans to gear up investment to new heights, driven by store refurbishments, expansion and IT & Supply Chain. This is enabled by the good 2016 business results the retailer just presented at its press conference. Turnover is up 3.9% increase in turnover to EUR21.62bn, growing on par with volume of products sold and net profit, which was up 4% to EUR636mn.

CEO Juan Roig expects 2017 to be the highest year for investment in Mercadona’s history, with the company set to invest between EUR1bn and EUR1.2bn, representing a 60% increase on 2016 levels. “We... made the decision to sacrifice our net profit to EUR200mn, which represents a third of the profit of 2016, with the objective of laying the foundations for the Mercadona of the future”, he said in a press release.

Our belief is that the key success of Mercadona is its balanced mix, blending discount with a supermarket-like atmosphere. However, stances have changed over the past years, from traditional players and discounters alike.

Discounters are bolstering their stores’ appeal while increasingly listing brands. Lidl for instance has also announced ambitious investment plans for Spain. Meanwhile, the supermarkets have changed their strategies - some are differentiating with a more qualitative and innovative approach (eg. Carrefour), while others are maintaining a more price focused image (eg. Auchan). The domino effect has forced all retailers to join in on this, as currently illustrated by El Corte Inglès’ Hipercor banner waves of price cuts.

To avoid becoming stuck between a rock and a hard place, we believe Mercadona has now decided to embrace a simple approach: to invest in a great leap forward to stay ahead of the competition, both in terms of offering, efficiency and store appeal. Its weapon has already been in existence for a few months: the “store of the future” concept, set to be rolled out to around 125 stores in 2017 (ca. 8% of Mercadona’s network).

This new generation of cost-efficient stores will enable the retailer to ease its bottom line and so increase its agility going forward. To sustain further growth Mercadona needs to go beyond processes to differentiate itself from competitors, something it has been doing through improvements to its fresh produce offering, by increasing its focus on healthy foods, through the introduction of new features such as sushi counters to its stores and the relaunch of its grocery e-commerce proposition. This ambitious agenda does indeed call for substantial investments.