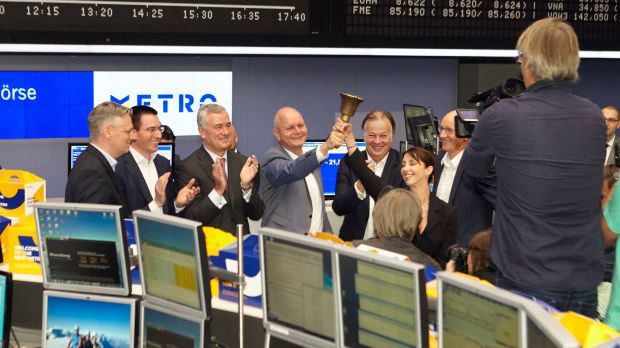 Photo: Metro
During this quarter, the new Metro AG entity launched on the stock exchange market following the demerger of Metro Group.

Metro AG, the new entity formed by the grocery wholesale and retail arm of former Metro Group, has presented results for its third quarter. According to CEO Olaf Koch, the results already give a good impression of where the company is heading.

Sales in the third quarter increased by 4.9% to EUR9.34bn, mainly thanks to the international business (up 7%). Hypermarket chain Real, which only operates in Germany, grew by 0.7%; while the rest of the business (Metro Wholesale) saw sales rise by 6.2%. The integration of acquired wholesale delivery service Pro à Pro also had a positive impact on overall sales growth. In comparison to the same period last year, EBIT went down 3.8% to EUR230mn. The company’s mid-term ambition is a 3% sales growth and a stable EBITDA Margin.

Metro Cash and Carry is currently in a phase of maintenance and remodelling. As part of this plan, the company is downsizing its massive cash & carry big boxes. In the last five years, store size has been reduced by around 10% to an average size of 6,500 to 8,500 sq m. In several cases, the company has reallocated some of the sales area to its B2B delivery service. This seems to be a clever way to find a more lucrative use for excessive store space and further push the ever-growing delivery business, while not compromising on instore services. According to the company, physical stores remain important, particularly for HoReCa clients who want to “not only see but experience” the food they are about to buy. As a result, the concept of ultra-freshness as well as a high degree of client service continue to be key elements to sustain the importance of bricks and mortar outlets, which the company deems essential for impulse purchasing.

Nevertheless, the future is digital and this is also where large parts of the retailer’s growth is coming from. Only recently, Metro opened its first delivery depot in Sankt Petersburg saying it sees considerable potential for this channel in the market. The move could also indicate a commitment to the region. When publishing its Q3 financials, Metro once again said that Russia in particular remains one of its most challenging markets with a relatively low customer frequency. A divestment however continues to be unlikely, not only as Metro said it was optimistic regarding the future of the market with consumer confidence set to improve, along with gross domestic product. It is also the banner’s third largest European market in terms of sales – after Germany and France. In Russia, Metro’s segment of HoReCa clients and traders is reportedly growing, while SCO (services, companies, offices) customers are in decline. As a result, Metro is looking to adapt its offer accordingly.

This is also what the company has done at its recently opened compact cash & carry store in Alés, France, which is just 1,250 sq m in size – corresponding to a tenth of one of its classic cash & carries, or about the size of a medium-sized supermarket. The Alés outlet is equipped with endless aisles linking shoppers via digital screens to the online assortment. The offline range has been changed entirely with a strong focus on HoReCa clients, reflecting Metro Cash & Carry’s overall strategy shift towards “maximal localisation” and giving autonomy to individual countries, regions and even individual stores.

The new store can be seen as a test of what is possible. To what extent could Metro reduce its store size while not compromising on product availability and service levels? France is an interesting test market for such a concept as US wholesale giant Costco recently entered the country – an arising serious competitor which Metro will soon have to compete with in more and more European markets.

Downsizing also gives Metro the opportunity to tap into new regions that are not suitable locations for massive cash & carry outlets. It could get closer to its most important client segment (HoReCa), by entering more city centres rather than relying on big boxes in the outskirts. These are also important factors that play a role when competing with the growing challenge of omnipresent discounters and price aggressive retailers that are also frequented continuously by professional clients reselling their affordable private label goods.