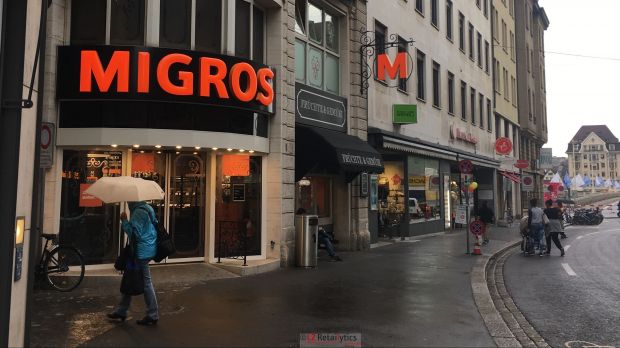 Photo: LZ Retailytics
A rainy day in Basel: Migros' e-commerce operation Le Shop is not growing as fast as it could. So perhaps it could make sense to give it a name that is reminiscent of the parent company?
Le Shop, the online grocery shop of Swiss market leader Migros, is said to be facing changes. According to SonntagsZeitung, the founder generation of the company that was acquired by Migros in 2006 has only recently left Le Shop. The fact that Christian Wanner, who was one of the founders, Dominique Locher and Sacha Herrmann have stepped down suggests that Le Shop is moving closer to Migros, the paper writes. They were succeeded by Urs Schuhmacher, a manager who has been with Migros for 30 years.

A major change that is being considered is a renaming of the e-commerce subsidiary, with a name that is more reminiscent of the parent company. Growth rates of Migros’ grocery online shop have been slowing down recently, with sales in the first half of the year climbing 0.5% on the previous year’s period.

Go For The Mighty M!

Le Shop’s growth rates have really been less than satisfactory given that it has widened its reach. Its click & collect concept PickMup was extended to nearly 100 pick-up points from 17 initially (while the two Drive pilots were shut down). The company started offering early-morning deliveries nation-wide, and it launched the first In-Car Delivery service “outside Scandinavia”, together with Volvo and Die Post.

What makes it worse: Its direct competitor Coop@home, from market second Coop (CH), is said to be seeing substantially higher growth rates at the moment. One has to add, though, that there is no official company data available, and Coop is coming from a slightly lower level. The LZ Retailytics database shows that Coop's e-food branch reached gross sales of CHF133mn last year, which compares with CHF193mn for Migros'.

To reignite sales growth it was suggested to rename Le Shop, which was founded as a start-up by four young entrepreneurs (including the departing Wanner) in 1997, to make it sound more Migros-like. Some oppose this idea and argue that Le Shop was an established brand and most people would know it was part of Migros. As a foreigner one is inclined to dismiss these arguments easily, but one must not forget that Switzerland defines itself by national traditions, and this includes companies just as much as sports and commemoration days. (An old-fashioned logo for an e-commerce operation doesn’t hurt either in this case.)

But here, we have a clash of two ‘national brands’, and Migros definitely is the stronger one. Everybody knows the simple orange M that symbolises the leading retailer, of which most Swiss are co-operative co-owners, by the way. And there is a lot of potential online: LeShop.ch has 55.000 regular shoppers – which is just 0.65% of the Swiss population. Compare this with Migros’ market share of 45% in 2017, according to the LZ Retailytics database!

In short, Migros.ch makes absolutely sense for the leading Swiss online shop for groceries (it should actually be M.ch if that domain was available). Of course, you don’t have to give up on the name Le Shop completely, for the time being – the good thing about online shops is that you can run them under various names.

But if you want to compete at eye level with Amazon – which is said to have ambitions to introduce Pantry in Switzerland, and is allegedly interested in locker locations at railway stations – and when you expect Lidl to extend its Menu Box offer (at the moment, however, Lidl is not interested in selling a full range of foods online) – then you should go for the biggest name you have. The Migros brand has an iconic status, so why should you go for a weaker one when you have to fight the international heavyweights?

By the way, Edeka, the German counterpart to Migros, should also consider renaming the acquired Bringmeister grocery e-commerce service for reasons of competitiveness. Since the acquisition, it is understood to be at least as cheap as Kaufland.de and Amazon Fresh – but what does it help if no-one knows?
Topics: Edeka Migros Coop (CH)