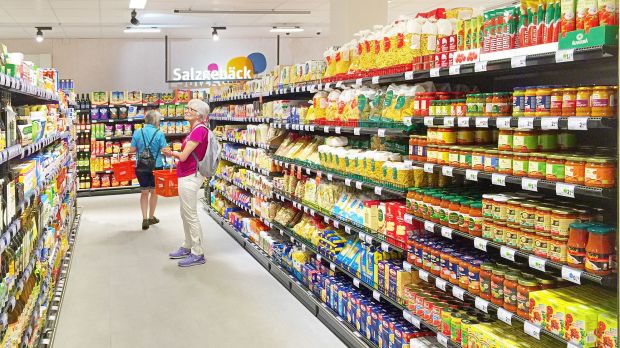 Photo: Tegut
Tegut ambient products are now also available via Amazon.de.
Local supermarket operator Tegut has begun co-operating with Amazon in Germany. Lebensmittel Zeitung reports that the Migros-owned chain, which is known for its strong focus on organic items, has begun to sell thousands of ambient products on Amazon. The range includes 800 price-entry private label goods as well as organic Alnatura products.

As of now, Tegut's products are available at amazon.de. Prime members can also order Tegut items via its subscription service Prime Pantry. Additionally, Tegut provides Amazon with items for its express delivery service Prime Now, which is currently available in the German cities of Berlin and Munich.

Many operators of physical stores have eyed the rise of e-commerce giants like Amazon and Alibaba half sceptically, half anxiously. It appears that some have now accepted the new market situation and are trying to get the most out of it. Co-operations with the big e-commerce players are an effective way for retailers to step into the unknown, such as entering new markets. When the news broke that Aldi Süd was to enter China, it was a courageous move that surprised the industry. It seemed out of character for the German discount store operator to enter a market so far away from the rest of its network – both geographically and from a cultural point of view. Only a couple of days ago, we learned that it plans to make this move via a co-operation with Alibaba's Tmall platform before opening a physical outlet. This is sensible and clearly fits with Aldi's careful approach. The co-operation will be a great way to test the market and find out whether Aldi's assortment resonates with Chinese shoppers. Again: private labels are the trailblazers in this move.

A co-operation with an e-commerce platform is a clever move bringing plenty of advantages for rather cautious retailers, regardless of size. For Tegut, a chain with under 300 stores, it helps to test the waters of an online business. The fact that it provides private label products differentiates Tegut and gives the chain the chance to analyse the items' online impact. Own brand products are less likely to be delisted compared to manufacturer brands, for which Amazon largely negotiates its own deals directly.

Currently, most leading e-commerce retailers do not have their own extensive private label grocery range. We are seeing Amazon beginning to develop its own brands, but it has a long way to go if it plans to reach a full range assortment. This means it is the perfect time for any retailer with a strong private label line to co-operate with one of the big platforms to test new markets or distribution channels. However, this also necessitates marketing investment to promote even economy ranges. This is increasingly necessary when several retailers’ private label lines compete, as is the case with already available Bünting‘s entry label Jeden Tag and Tegut's Kleinster Preis on Amazon's German website.