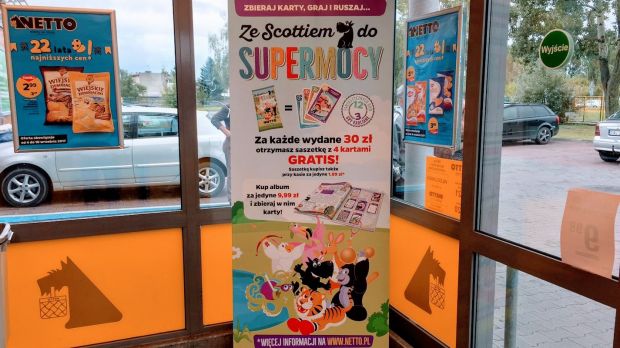 Photo: LZ Retailytics
Netto supports the initiative with in-store marketing by the entrance to motivate larger baskets from the get-go.

Dansk Supermarked’s discount banner Netto has started a new loyalty initiative in Poland aimed at teaching children and parents to eat healthily, Polish retail news portal Handel Extra reports. The scheme involves selling a collectors album filled with puzzles, recipes and game ideas, all revolving around the topic of healthy eating. The loyalty rewards for the scheme come in the form of 108 collectable game cards, which are received in sets of four for every PLN30 spent in Netto stores.

The concept called “Ze Scottiem do supermocy!” (With Scottie to Super Power!) is a continuation of a previous programme featuring the discounter’s Scottish terrier mascot. At the same time Netto's main competitors and larger discounters Biedronka and Lidl have also followed up on their previous, successful healthy eating schemes, featuring a range of vegetable character plush toys. At Biedronka these are collected in exchange for loyalty stickers while at Lidl they are simply sold directly.

With school just starting in Poland it makes sense for these retailers to highlight educational values and at the same time support their seasonal back-to-school offers with something fun. We notice certain significant differences between the initiatives, however. While Lid’s and Biedronka’s target children more directly and possess a higher chance for impulse buys, Netto’s addresses parents.

This mirrors our view of which target groups the three chains traditionally have. Considering the assortment differences observed on our store visits, we believe that Lidl and Biedronka have a clearer focus on families and young people while Netto is targeting a slightly older audience. With its new healthy shelves and wider fresh areas it seems that the latter is trying to increasingly tap into the main audience of the other two. This would explain its more elaborate approach, advocating educational values, which would suit its current audience better and could still lure new shoppers (from a distance) wanting something fun AND educational for their children.