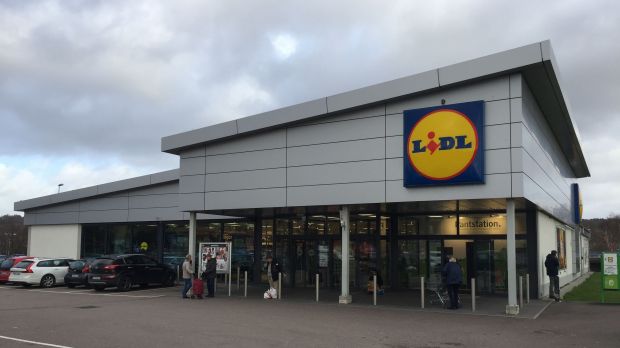 Photo: LZ Retailytics
This Lidl store in Västra Frölunda, Gotenburg is one of 130 that had already been converted in Sweden at the time of our visit

Lidl in Sweden is well underway with the conversion of all of its 171 stores to a new concept and LZ Retailytics was invited to visit one of the 130 already converted stores – in Västra Frölunda, Gothenburg – to see the new concept for ourselves. The CEO of Lidl Sverige, Johannes Fieber, guided us through the store, which boasts a comprehensive mix of international and Swedish private labels as well as A-brands - all presented in an orderly, modern shopping environment. Fieber quoted market research firm GFK, saying that 100% of Swedes are aware of Lidl, 70% like Lidl and 50% shop at the retailer at least once a year. Expansion will be the key to filling these gaps and the new concept is designed to attract new customers and convince shoppers that they can shop for the entire week at Lidl. The retailer thus plans to reach 200 stores in Sweden by the end of 2020 and more than 300 in the longer-term, Fieber disclosed. 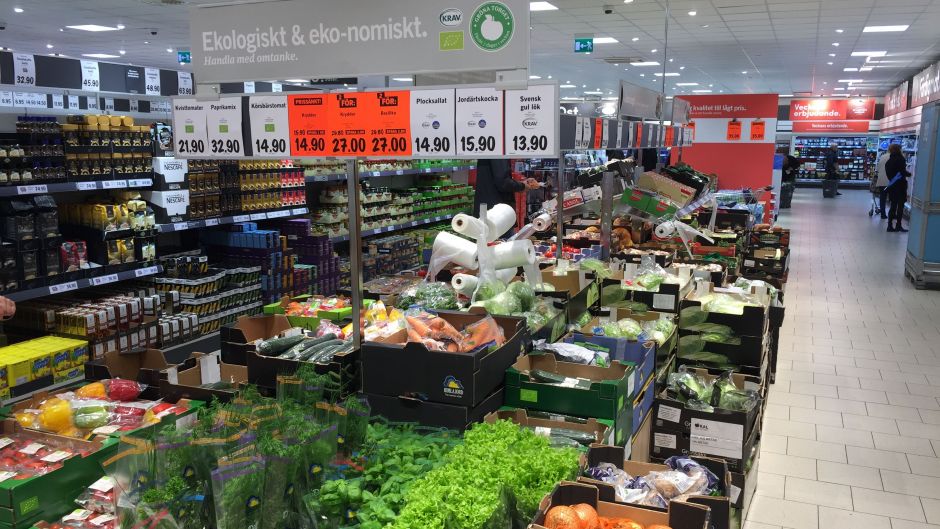 LZ Retailytics
Lidl shows its fresh focus by placing fruit & vegetables by the entrance. Here, it communicates its organic range that comprises around 20% of the fruit & vegetables assortment.
A challenge for Lidl in Sweden has been the need to fight preconceptions about low prices equating to low quality and that the retailer stocks mostly imported products.  To address the latter, the new concept includes a merchandising strategy that highlights its Swedish assortment. The domestic and international private labels are separated within each category to underline that it has both and to provide convenience for those shopping by product heritage. Following this principle, Swedish label Enebacken is to the right in the charcuterie section and the international label Dulano is to the left. This dual private label strategy then continues throughout the store. Several other categories including fresh meat, poultry, eggs and bread have almost entirely products of Swedish origin. Even the fruit & vegetable department has its own Swedish private label called Himlajord. Depending on the season, up to 40% of the fruit & vegetables assortment comes from Sweden and almost 50% of the total assortment buying value is spent at Sweden-based suppliers, Fieber informed us. 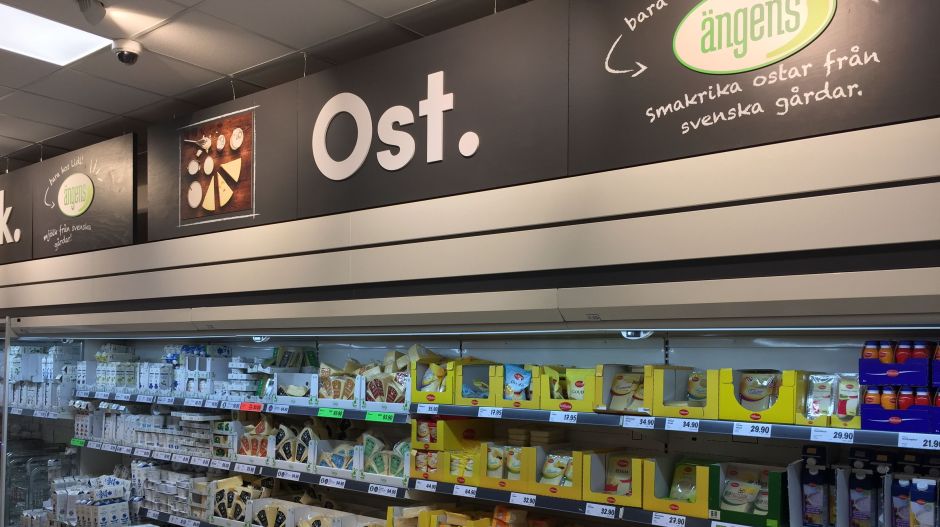 LZ Retailytics
Ängen’s Swedish dairy products are to the left and the international Milbona label to the right, clearly separated by the colour of the shelf-ready packaging. Ängens is the label promoted in the overhead category navigation along with the text “Flavoursome cheeses from Swedish farms”.
On top of its private labels, around 20% of the assortment consists of A-brands, Fieber said. We mainly observed them within emotionally involved categories such as coffee, bread, butter, beer, chips, soft drinks and baby food. The unexpected category of Mexican food condiments also features A-brands, due to the popularity of that cuisine in Sweden. To provide something unexpected, Lidl employs its Smakresa (Taste Journey) concept, similar to that in other markets. This usually features “guest” private labels from a specific Lidl country (recently Finland) but at the time of our visit the Christmas assortment had already been introduced with the Deluxe private label being in the spotlight. 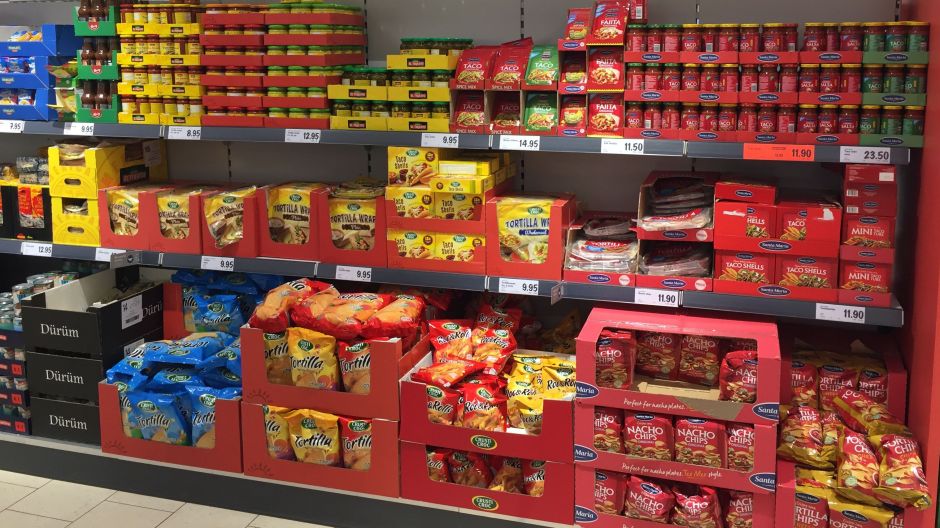 LZ Retailytics
Lidl offers a comprehensive range of Mexican food condiments including the popular Santa Maria brand and its own Crusti Croc as well as El Tequito labels. This shows how the retailer adapts both its private labels and A-brands to fit Swedish preferences.
According to Fieber, the new concept is also designed to provide a clearer and more informative shopping journey. Large category signs highlighting the main private label in each category makes navigation easier. Fruit & vegetables are placed first to communicate the retailer’s fresh assortment. The different campaign areas for frozen, chilled, non-food, and ambient products are presented with a clear uniformity, so shoppers understand what’s part of the regular assortment and what’s not. Product characteristics like organic, environmental credentials and heritage are consistently made visible on price tags, overhead signage and store furnishing. Fieber told us that endorsements and reviews from independent sources are instrumental in convincing shoppers of Lidl’s product quality which is also why taste test winners are highlighted in the store. He went on to say that this is harder to implement in Sweden, because there is not a reviewing authority such as the German Stiftung Warentest in existence. 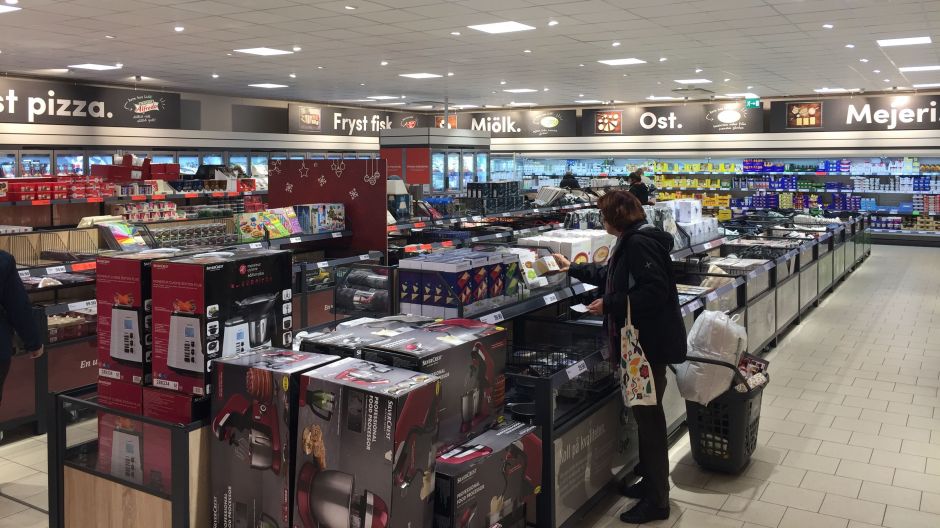 LZ Retailytics
The new black category signs give a quality feel to the store. The non-food section resembles that found in most Lidl markets. It is to be maintained in its current proportions as it’s very much appreciated by shoppers, Fieber informed.

At the time of our visit, Lidl – with 171 stores in Sweden – had only three more than it did at the end of 2014 (with two store openings in 2017). This means that the goal of 200 stores by the end of 2020 will clearly disrupt the expansion trend of recent years. However, when looking at the retailer’s sales growth of 13.4% in those two past years, the decision to expand becomes very logical. The revamps have evidently been well received by shoppers, signalling to the retailer that the concept is ripe for further expansion. Lidl Sverige CEO Johannes Fieber thinks the concept has huge potential in the country, which could be realised through shopper trials. We are inclined to agree and in fact, we forecast Lidl to be the fastest growing grocer in Sweden over the period 2016-2022. 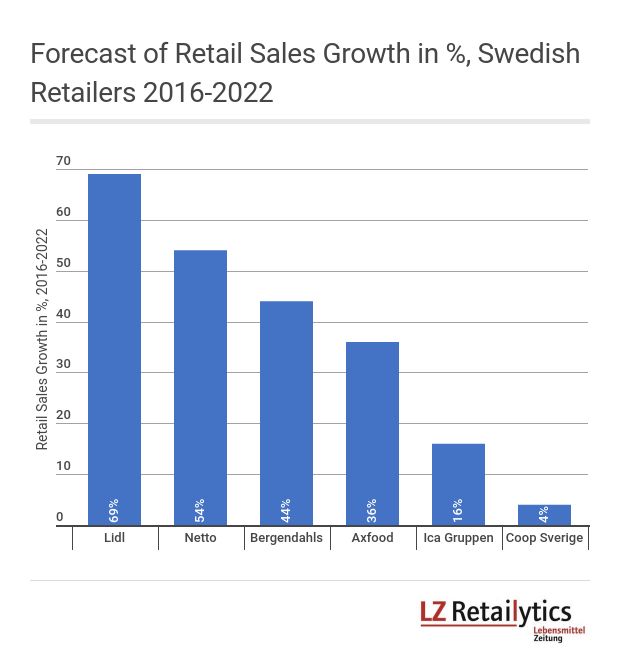 LZ Retailytics
LZ Retailytics forecasts Lidl to be the fastest growing grocer in Sweden 2016-2022.
We expect that this growth will be driven by store network expansion, sales surface extension and increased sales densities. With the retailer’s newfound flexibility when it comes to opening stores in varying locations, along with its sustainability goals, we think it will manage to reach its aim of 200 stores by 2020. We also think that an increased demand for its model will help it expand to areas with high competition. The new concept will be key to fuelling that demand as well as growing future like-for-like sales.

So, what was it then that we liked about the new concept? Our first impression was that it follows Lidl’s global supermarketisation development. Featuring around 3,000 articles including non-food, a private label volume share of 80% and sales surfaces of 1,000-1,500 sq m, it does not convey any sort of strategic overhaul. Even so, an up-trading initiative, is in our opinion exactly what’s needed for the discount formula to gain traction in Sweden. Private label acceptance has been widened largely by the other major grocers; the willingness to grab a bargain and save time has always been there, and Lidl and the shoppers now seem ready to meet half-way.

What impressed us the most during our store tour was the retailer’s attention to detail. Lidl Sweden leverages the best ideas and elements from the central organisation and customises them to fit the Swedish market, highlighting anything which it believes will counter existing preconceptions. Showcasing and promoting its Swedish private labels in several ways; listing what we feel are highly relevant A-brands; and providing in-store signage highlighting its quality principles; are all examples of this. Also, efforts such as only selling products containing eggs from free-range hens; coffee, tea and chocolate from certified sources; building e-charging stations; and climate compensation shouldn’t be underestimated as drivers to positively shift quality perception. Another thing that surprised us was the wide fresh assortment, with most types of fresh meat, fresh fish and fruit & vegetables that you’d  expect to see in a Swedish supermarket. The slicker, more orderly store layout is also likely to work in the retailer’s favour, as it deals with the confusion about the nature of Lidl’s private labels, identifies which parts of the assortment are only temporary, while also providing a more pleasant shopping experience. 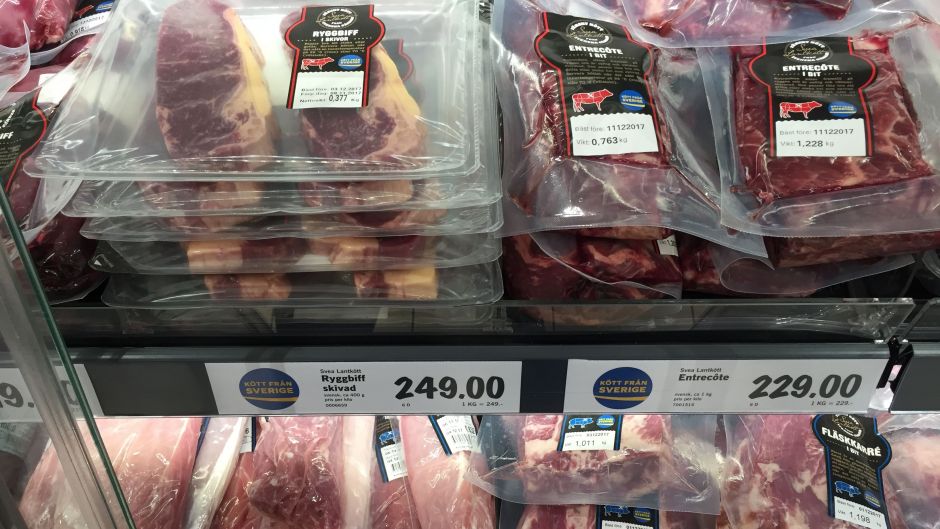 LZ Retailytics
The wide fresh meat assortment is predominantly from Swedish suppliers which is clearly shown on price tags, packaging and in-store signage.
As all converted stores, according to Fieber, follow this same model, we expect the above elements to generate positive word of mouth for the retailer, attract new customers and increase the loyalty among its existing shoppers. That said, Sweden is a hypermarket-dominated country, with most big boxes expanding their already wide food assortment and rapidly introducing e-commerce services. Further, price focussed superstore banner Willys, is showing strong growth; and Netto, with many A-brands to complement its discount formula, has aggressive expansion and revamp plans. Against this backdrop, to truly convince shoppers that it can offer a one-stop shopping destination, Lidl might have to make further compromises on its model when it comes to assortment and services. This could be done by claiming a leading position in areas such as organic, free-from, healthy and vegetarian food, where the retailer has ambitions but where we still see potential for it to develop further.

Read about the other stores we visited in Sweden: