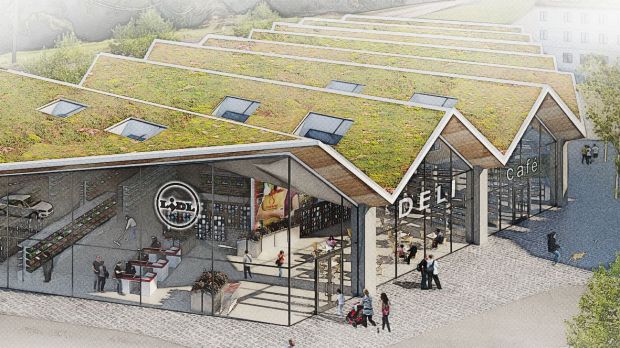 Photo: Link Arkitektur/Lidl Sverige
The new Lidl in Sigtuna Stadsängar has several sustainable features and other untypical Lidl elements such as a deli and café.

Lidl is to open a new concept store in Sigtuna, north of Stockholm. It will feature a delicatessen shop-in-shop with food service, sun-panels on the roof, eco-zones and chargers for electric bicycles and cars.

The goal is that the store will be certified “outstanding” according to the international BREEAM standard. A handful of new Swedish Lidl stores have achieved this rating as the retailer has its own goal to sustainably certify all its new stores.

The store is part of the retailer’s ambition to reach 200 stores in Sweden by 2020. Currently, there are 170 stores and Lidl has already signed agreements for a further ten new plots. Many of the new stores are in untypical locations for Lidl, including large cities centres, shopping centres and newly-built city areas. Between now and 2020 the retailer plans to invest SEK3bn (EUR317mn) in building more stores, a third warehouse and a new head office.

In 2016/17 Lidl in Sweden grew its net turnover by 7.5% to SEK8,958mn (EUR946mn). As well as building new stores, the German retailer is also refurbishing its entire existing store network. Last year 50 stores were upgraded and to date a total of 126 stores have been refurbished.

People may wonder whether all new Lidl stores in Sweden will now include a deli and café. Our answer is that this is highly unlikely. In the case of Sigtuna, Lidl seems to have been awarded the contract as a result of demand from residents and the local planning office. If anything, this shows the German retailer’s impressive flexibility in the country to win attractive plots ahead of established domestic players.

It isn’t easy to find good new locations in the consolidated Swedish grocery market; and Lidl has recognised that it must sometimes compromise even if it goes against the preferences of its top management. Back at the beginning of the year, Schwarz Group CEO Klaus Gehrig said that such “glass palaces are way too expensive”, but that the retailer has to finish what it started, referring to similar projects outside Sweden.

Therefore, we anticipate that we will most likely see the retailer following its newest international standard mainly in Sweden, with some exciting compromises every now and then to reach its 30 new stores by 2020. And naturally, the retailer will fully utilise the PR opportunities that this brings. This aligns perfectly with its aim to attract new target audiences to its Swedish stores.

LZ Retailytics data shows that it managed this last year thanks to store refurbishments and extensions, as well as range improvements; with retail sales per store going up 6.2% to EUR6.36mn. We forecast this figure to pass EUR8mn by 2020. Interestingly, this is still below the European average for Lidl stores which hints that there could be continued organic growth opportunities for the banner in Sweden.