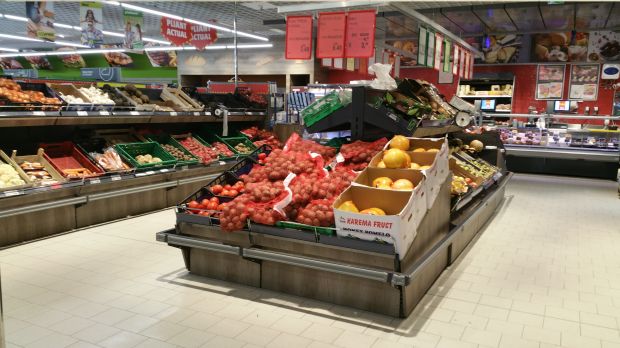 Photo: LZ Retailytics
Rewe is refocusing on Penny discount stores in Romania.
Rewe Group has decided to pull the plug on its Romanian discount-and-supermarket hybrid XXL Mega Discount. Of the eight stores, two will be sold off; the other six are destined to be converted to the Penny banner, bolstering the existing discount store network of currently almost 200 outlets. “The results of the Penny concept and our focus on brand development in recent years has convinced us of the significant potential for Rewe's development in Romania,” the German retailer said in a press release. Reasons for the suspension of XXL Mega Discount were not provided. XXL Mega Discount, which saw itself renamed as Penny XXL for a short period of time before being converted back, featured a broader assortment than Penny, with more non-food items, on sales areas of up to 2,400 square metres.

Rewe’s Vision Of a Romanian Empire

Good news for the retailer: Pooling its resources, Rewe Group can finally focus on Penny's expansion without troubling itself with underperforming construction sites. After all, only Penny has remained of the originally four concepts that Rewe Group once operated in Romania. After the sale of Selgros and Billa, the German co-operative is now giving up on its attempt to replicate a Kaufland-esque banner - which was unique within the group and desperately trying to mimic the success of competitor Schwarz Group’s big box concept.

It is right to do so. Rewe Group is increasingly seeing its hopes dashed in its markets outside Germany and Austria, characterised by difficulties keeping up with the growth of its peers, not least Schwarz Group. Consequently consolidating its efforts, it is pulling the plug in markets where there is no real chance to achieve a top leadership position, as for Billa in Italy, Croatia and Romania, and Penny in Bulgaria. Spending time, money and scarce management resources on an XXL concept that is far from being rolled out any time soon would have been another distraction – a distraction that Penny cannot afford should it ever want to play an active role in the market.

The conditions have seldom been more favourable: Penny in Germany, long time the problem child – and a big child it is! – is growing profitably again, freeing up resources and capability for international ambitions. Penny Romania is showing steady growth, and is expected to be opening a double-digit number of stores annually in a market that is too big and lucrative to be left to others. And those who still shed a tear over XXL Mega Discount may find consolation in the fact that Penny is extending its services as well as its store sizes. Since it has been integrating serviced counters in its increasingly spacious stores (up to 1,600 sq m), the conceptual distance would have become more and more meaningless in any case.
Topics: Rewe Group