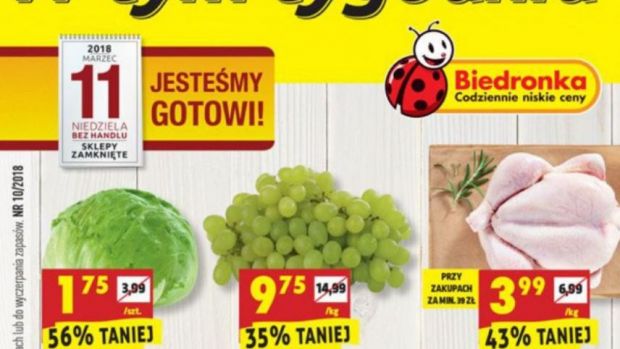 Photo: Biedronka
'We are Prepared.' On the title of its current promotional leaflet Biedronka allays potential customer concerns regarding store closures on Sunday.

From 1st of March 2018 the law restricting Sunday retail trade has come into force in Poland, with the first non-trading Sunday scheduled to be 11th March. As the Ministry of Family, Labour and Social Policy states, the ban on Sunday trading will be implemented gradually, with two trading Sundays per month in the current year, one one per month in 2019 and only seven exceptional cases per year from 2020 onwards.

The bill concerning the ban on Sunday trade was signed by President Andrzej Duda in February this year after having been initiated by the trade union NSZZ Solidarność more than a year ago. Controversial discussions regarding the scope of application had moved the Ministry to publish a Q&A document last week, explaining the law’s interpretation jointly with the Chief Labour Inspectorate.

The genesis of the Sunday Ban on Trading is reminiscent of an agile product development process that is running over budget. The general objective seems to have been clear up until the final stages, but conflicting stakeholder interests have led the last couple of project sprints to neglect system requirements; while time pressure results in omitting the instruction manual.

In the case of new technology, a quickly created blog, a forum and Q&A pages often do the trick. This also seems to have been the approach of the legislative branch, conveniently offering an interpretation, which has been accused by legal experts of being ‘partly contradictory’ to the newly-created law. This especially concerning the inclusion of distribution centres into the scope of ‘trade objects’. A logistical challenge clarified one week before the first Sunday closure is scheduled.

Even with many questions unanswered, the large grocery players in Poland are expected to play on the safe side, preparing to close their stores on Sunday in any case and reroute their logistics. Biedronka, among others, has announced extended opening hours on Fridays and Saturdays, at the same time ensuring adequate checkout staffing to absorb higher customer traffic. Additionally, the retailer is considering reorganising its promotional periods to spread customer numbers more evenly across the week.

The situation will be more difficult for large format operators. To date these retailers have generated the majority of revenue at the weekend, capitalising on their one-stop-shopping appeal and the magnetism of the surrounding shopping mall, while offering full-family entertainment for a Sunday stroll. The shift in channel development will now certainly be in favour of traditional owner-managed shops, forecourt stores and will lead to additional growth for e-commerce operations.

Last-minute changes to the ban on Sunday trade were manifold. Nevertheless, successful retail managers are agile, used to thinking on their feet and able to react swiftly to changing customer preferences and behaviours. With these political ambitions emerging more than a year ago,  we are convinced that most – if not all – retailers have a plan B in mind to prepare for the changing frameworks.