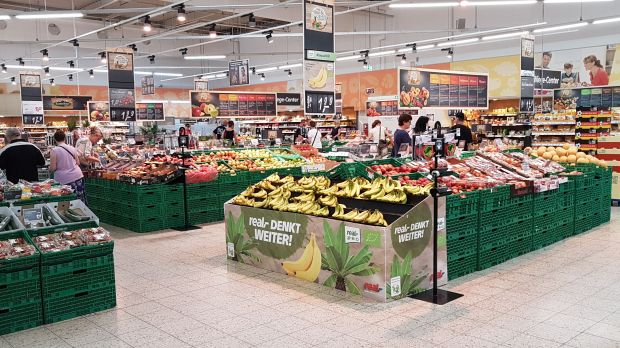 Photo: LZ Retailytics
Not yet a market place: The fruit and vegetable department at a current Real hypermarket.

Metro’s hypermarket operation Real now has officially announced the first initiatives of its extensive concept revamp. As part of this, the company has launched a new slogan “Wir sind real” (‘We are real’) as well as a new corporate design, logo and TV spot.

The banner is to add products to its assortment “that have so far only been available for customers of restaurants and specialist stores”. Exclusive premium goods are said to be put into spotlight. Real intends to convey a market place atmosphere while it attempts to have competitive prices as well, thanks to extensive price reductions that have been announced for the following weeks.

In contrast to neighbouring France or Belgium, Germany has never been a promising market for big box grocers. It has always been challenging for operators within the channel to gain ground and see positive developments. With the rise of grocery e-commerce and both supermarkets and discounters trading up the competitive situation has become even more intense. Even those players that the industry usually sees as overperforming in this challenging game have lately shown signs of setbacks.

The issues of competitor Kaufland in this regard, however, are not only structural but partly homemade. After discontinuing numerous secondary brands, the big box banner owned by Schwarz Group, a retailer usually spoiled by success, saw itself forced to list most of these items again, due to shopper demand. Currently, the store portfolio is being reassessed. Less profitable stores are being replaced with better ones to keep up the total number of 650 outlets. All stores are being given a revamp, and a focus on fresh and ultra-low price promotions are expected to improve footfalls and turnover. Of course, all these measures have a negative impact on the bottom line. Regarding the top line, most recent developments indicate that the situation has finally improved. But another issue remains the costly Kaufland home delivery trial in Berlin.

In contrast to Kaufland's recent and presumably temporary slow-down, Real has always been among those clearly struggling within the channel. We have seen many attempts to turn around the fortune – often, however, not backed up with the relevant financial means. But lately, the banner seems to have become serious about its revamp initiatives. In fact, Real has already started with the first refurbishments.

At first glance, the plan Real has worked out sounds as if it wasn't very different from the platitudes most German grocers have been talking about recently. It has become increasingly difficult to count the mentions of expressions such as 'unique shopping experience' or ‘places to dwell’ in recent press statements, and Real's term 'market place' has become a commonplace.

Nevertheless, reading between the lines, we can find one key aspect that not only differentiates Real’s move from others but also could guarantee its implementation: Real is talking “ultrafreshness”, a term that so far had been reserved for big sister Metro Cash & Carry. Real mentions new exclusive premium food products that were not available for typical end-consumers previously. Such phrases indicate that the hypermarket chain is to really up its game of collaboration with the wholesale arm that it has moved even closer to after the Metro Group demerger.

Finally, the chain is taking better advantage of the unique assets like Metro’s superior supply chain, a move that guarantees super fresh grocery items. Listing premium goods to target hobby chefs is an idea Metro AG is currently following at Makro in Belgium which is also open for end-consumers.  Of course, Real has plenty to do now and its revamp agenda is long. If it manages to – carefully! – play the Metro trump card, however, it could be one of the German big box operators that really manage to create a market place atmosphere and not only claim to do so.