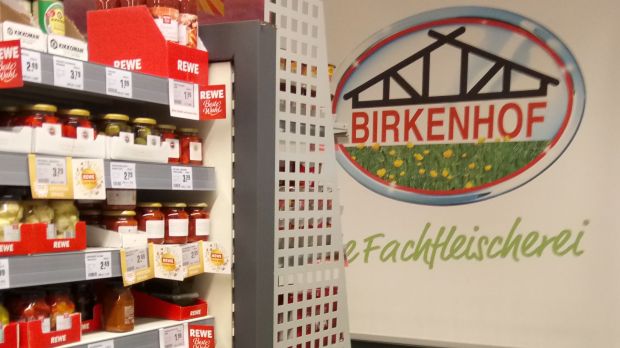 Photo: LZ Retailytics
Not easy bringing down the Kaiser: Defunct Kaiser's-Tengelmann butcher brand Birkenhof is still prominently promoted in this store acquired by Rewe - despite recently being closed for refurbishment.

Rewe Group wants to accelerate its efforts to modernise its store network and logistics; and at the same time invest in digitisation and training for its employees. Therefore, the Cologne-based retailer intends to increase its investments to more than EUR2bn in 2018, following EUR1.7bn for 2017, its incoming CEO Lionel Souque told local newspaper Kölner Stadt-Anzeiger.

This, together with the integration of Coop (Germany) and a batch of Kaiser’s-Tengelmann stores, will have a negative impact on profits, Souque added. While standing at around EUR500mn in previous years, “this year will be a bit worse and next year won’t be much better either”, he said. The current business year is all going well, he added, saying that sales are up 5% and 3% respectively for its supermarkets and discount banner Penny.

“Amazon is going to affect all industries,” he added, including banking and insurance. This is why Rewe Group continues to invest in expanding its e-commerce operations. Digital innovations are not on the agenda, the focus is more on operational excellence in order to achieve full satisfaction among shoppers, both instore and online.

Rewe Group’s profits are going down, says the new man at the helm. Often, when a long-standing, prominent CEO leaves a successful company, you don’t know if there are going to be any bad surprises turning up once this personality is gone – issues that have long been glossed over; problems that have been ignored; divisions that have long been portrayed positively on the balance sheet but turn out to suffer from an investment backlog. Is this what previous CEO Alain Caparros left for Lionel Souque at Rewe Group?

It doesn’t seem so. Not only because the two Frenchmen have been able to work together quite well; but also that Souque has grown up with the German retail group over the last 21 years – indicating that he should know his employer from A to Z – from Adeg to Zooroyal. On the contrary, perhaps one should instead ask if he shouldn’t have accumulated more experience from outside the company – but this is what he has his assistants for. He is also experienced in both the supermarket business and the important discount division, as he started his career with Penny in 1996. In addition, he has spent significant time abroad – in Austria for Billa and Rewe International.

The decline in profits reflects the challenging tasks that his predecessor has left to Souque, but for the good and not the bad. Integrating Coop in Schleswig-Holstein faster than originally planned; and converting Kaiser’s supermarkets to Rewe in Berlin is costly; with both, especially Kaiser’s, having seen major investment backlogs. The high cost of these integrations must just be accepted. The duel with market leader Edeka had long stepped into the final phase and it was regarded as imperative to grab whatever was possible from the ‘bargain table’ of left-over grocers in Germany.

So, one can assume that the investments that have been made, resulting in attractive stores, will pay off once Edeka and Rewe have finalised their integration and upgrading works. On a national basis, there won’t be any other supermarket operators left in Germany! (Of course, there are still five nationwide discounters and a few hypermarkets around, including Kaufland and Real. And Kaufland’s inclination towards smaller stores may gradually turn it into a new challenger for the two supermarket giants.)

In general, Souque wants to maintain Caparros’ focus on grocery e-commerce. Amazon continues to be the big spectre, of course. The Frenchman states that the US giant is facing issues in fresh food delivery; and in the US and UK “Amazon’s success with groceries is limited. We as well don’t make profits with our delivery service and won’t do over the next few years.” But it is an important service “that customers expect,” according to the CEO.

Somehow one gets the impression that Souque’s tune sounds a bit subdued when compared with his pugnacious predecessor. He doesn’t seem overly happy – obviously there is still a lot to do to improve the online business. Since the entire e-commerce process has not yet been optimised – the "operational excellence" he spoke about – he thinks it doesn’t make sense to “constantly try new things”. Instead, focusing on the core competence, which is food, will provide a good advantage over Amazon. But “technology-wise, we will never be better than Amazon,” Souque said. A remarkable statement! Is it resignation of a CEO who seems to have almost given up before he’s really started, or simply a pragmatic acceptance of reality? For the retail group, one should hope it’s the latter.