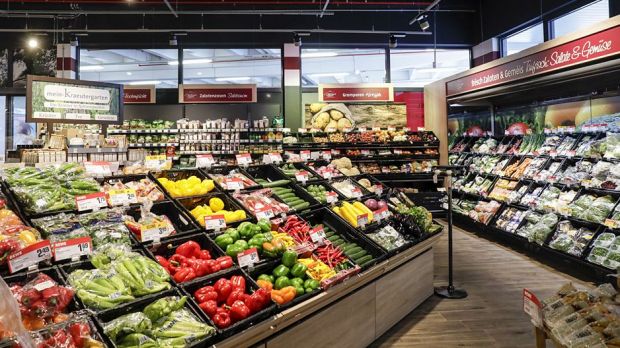 Photo: Lebensmittel Zeitung / Fedra
Inside view of the Rewe Hundertmark located in Echternach

Rewe’s independent shopkeeper Hundertmark opened the first Rewe store in Luxembourg earlier this year; and will more than likely open further outlets in the country, Lebensmittel Zeitung reports. Hundertmark already has ten stores in Germany, near to the Luxembourg border. The Rewe XL Hundertmark store in Luxembourg, sized at 1,550 sq m, is located in the small town of Echternach, close to the German border.

The store reportedly had a successful start in April, with basket sizes double the value of those in the retailer’s German stores. The assortment has been adapted to local preferences, with 7,000 out of the 30,000 SKUs being stemmed from Luxembourg. This kind of success story has attracted many retailers to the country over the past few years, prompting LZ Retailytics to consider the retail environment within one of Europe's smallest states.

LZ Retailytics
The ranking displays retailers with retail sales above EUR500mn, operating in Luxembourg. The figures exclude non-food channels and petrol sales, but include VAT.

The full ranking as well as thousands of other data points and customised reports relating to the retail industry across all of Europe are available to LZ Retailytics subscribers.

Luxembourg is dominated by local retailer Cactus, which over the years has focused on local products and a more premium offer to compete against international retailers. Very much like Rewe now, these retailers have been lured to the country by high consumer spending and a rapidly growing population, which has increased by some 58% over the past thirty years. This, combined with the relaxation of new store opening legislation to fend off cross-border shopping, is stimulating the retail scene there.

Challengers Auchan & Ahold Delhaize in particular have demonstrated ambitious expansion plans in the Grand Duchy, with hypermarkets and click & collect locations for the former; and convenience stores and supermarkets for the latter. While discounters Aldi & Lidl are progressively nibbling away at market shares, we believe that the cultural diversity of Luxembourg's population gives full-range retailers the opportunity to fend them off by offering a deep assortment. Nearly 50% of the residents hold a foreign passport; not to mention the thousands of cross-border workers.

To tap into affluent locals, national commuters and tourists alike; many retailers have been interested in entering this dynamic but small market. As well as a few committed action plans from international retailer head offices; such ventures also often take the form of franchise operations or alternatively initiatives from an affiliate which operates in the nearby regions of Belgium, France... and more recently Germany.