Sainsbury’s pre-tax profits fell by 8.2% last year as price competition and a tough UK market took its toll on results. Meanwhile like-for-like sales remained negative, although the 0.6% drop compared favourably to a 0.9% fall the previous year.

Sainsbury’s acquisition of Argos boosted group sales overall, which grew by 12.7% to GBP29.112bn (EUR35.52bn). The retailer said that it has already produced cost savings of GBP130mn (EUR158.64mn) and a contribution of GBP77mn (93.96mn) to full year profit from Argos, which was acquired last year from Home Retail Group. 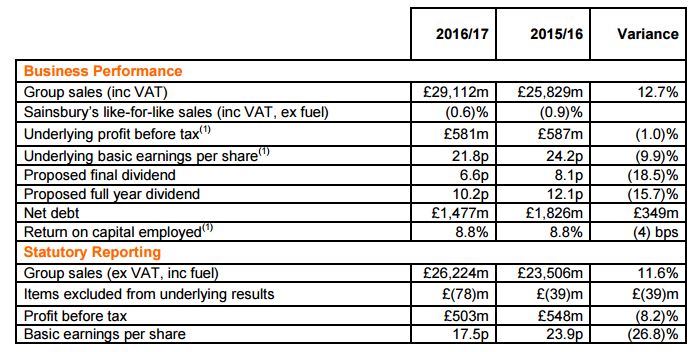 Sainsbury’s is in a stronger position than most UK grocers, thanks to its timely Argos acquisition last year. The UK grocery market is currently characterised by intense competition and grocery price wars, together with inflationary pressure – some of which retailers are being required to absorb. Yet with the opening of 59 Argos Digital stores in Sainsbury’s last year and sales growth at Argos of 4.1%, Sainsbury’s is in the position of being able to at least diversify its portfolio into higher margin categories and leverage synergies, whilst consolidating space.

Food sales at Sainsbury’s have suffered over the last year, as seen by the 0.6% drop in like-for-likes. However, whilst remaining negative, this was an improvement on last year’s 0.9% fall and shows the retailer’s investments in price and quality are delivering results. By dropping multibuys in its stores last year, the retailer said that promotional participation has dropped by 6% to 25%. The company is also on track with its cost saving efforts, which aim to deliver GBP500mn (EUR610.14mn) by 2018, as part of a three-year plan.

Sainsbury’s results also reflect how rapidly shopper habits in the UK are changing. By channel the retailer saw supermarket sales decline by 2%, whilst convenience grew by 6% and online was up 8% during the year. With a strong multichannel strategy, Sainsbury’s remains in a better position than most within a highly competitive market.