Schwarz Group Holds On to Bricks And Mortar 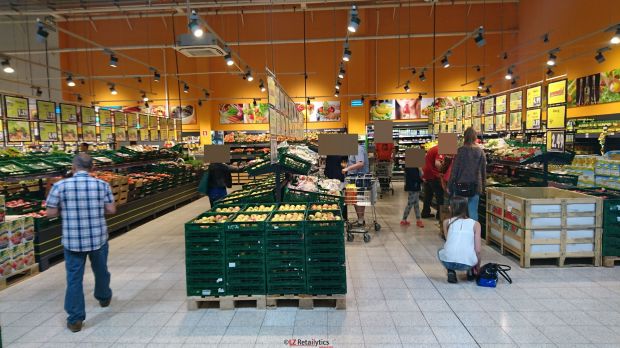 Photo: LZ Retailytics
Kaufland is to undergo a 'facelift programme', according to the Schwarz Group management.
Schwarz Group, operator of Lidl discounters and Kaufland hypermarkets, continues to rely on its bricks and mortar business, Lebensmittel Zeitung has learned. Klaus Gehrig, CEO of the leading European grocer, has confirmed the German retailer has shelved plans for a costly e-food concept for Lidl in its home market.

Its existing online shop will focus instead on non-food, while Kaufland will continue its grocery delivery trial. In total, a sum of EUR7bn is earmarked for investment in the entire group this financial year. In China, however, Lidl will shortly enter the e-food market via an online platform, similar to the recent launch of Aldi Süd.

Schwarz’s net sales in the past year ended 28 February 2017 reached EUR90.2bn. Lidl’s net sales in Germany climbed from EUR19.3bn to EUR20.4bn. At Kaufland, sales growth was less impressive, rising from EUR13.5bn to EUR13.6bn.

Schwarz now wants to step up efforts to modernise its Kaufland chain, while Lidl needs to become “leaner and simpler”, according to Gehrig. Schwarz has been very generous with Lidl, but it has not spent enough on the big box division, Gehrig said. Now a 'facelift' programme is due to be rolled out across the entire international Kaufland network.

Little Left for Lidl in Europe

Another fantastic year for Schwarz Group, the parent of Lidl and Kaufland. With net sales of over EUR90bn, the German retailer has long been widening the gap between it and its counterparts, Carrefour, Tesco and Aldi, to top the European retailer ranking. And there is no sign of this gap narrowing, since the growth that LZ Retailytics forecasts for the coming years is still far ahead of most other retailers, if not in percentage terms then surely in absolute terms.

That said, after 7% and then 8% growth in the previous years, group sales climbed ‘only’ 5% in financial 2016/2017. While this is still impressive (and is also due to currency effects, namely for the GBP), it is a development that could be expected. In recent years, Lidl in particular (contrary to Kaufland) has pulled out all the stops in order to drive sales growth, mostly successfully.

This has included an uptrade of assortment, additional services including instore bakeries, high-end marketing – not only quality- but also quantity-wise – and huge investment in store redesigns. And last but not least, store extensions. Within just a single year, the average (!) Lidl store in Spain, for example, grew by nearly 50 square metres, or 5%. A lot of new space that can be leveraged to grow sales. While this has definitely helped driving turnover per store in most countries, it has not necessarily driven sales per square metre.

Because there must be a point where this store extension effect comes to an end – unless you enhance your ranges exorbitantly. And there must be a point where pimping up discount stores with mirrored glass entrance halls and bakeries and toilets and baby changing tables and meeting rooms and cafés and latte machines no longer pays off. Schwarz Group does not disclose profits, but judging from its actions, such a point must have been reached. Sven Seidel, the Lidl CEO who joined from Porsche Consulting, had to leave in spring this year. Schwarz CEO Klaus Gehrig simply said that Lidl was “too lavish”.

Luxury problems, of course. And not too bad for Lidl. Thanks to the “lavish” spending spree, there is no urgent need for major store network investment. (Even if there was, a EUR7bn group budget would still leave some breadcrumbs for repair work.) It’s still taking competitors years to close the investment gap to Lidl – provided that they recovered from the shock at all the lavishness displayed by the newly-rich European discount leader, who is so different from the old-time paragon of thriftiness which once was Aldi.

The question is, how will Lidl grow now? New markets, including Serbia and the Baltics. Infilling gaps in existing markets. The US is waiting, where the first stores open on 15 June – the Group’s first non-European market, and Lidl’s very first market entry where it cannot simply ‘copy-paste’ its existing European ranges and concepts.

But what about growth online? Grocery e-commerce has clearly been struck off by Group CEO Gehrig for Lidl. Too expensive, and no convincing growth outlook. From a discounter’s perspective, he is surely right. But just because you have no stunning ideas, and just because you can no longer calculate sales densities and productivity the way you’ve done it since 1973, does this mean ignoring the fundamental changes in retailing is the right way to go? Perhaps it’s a disconcerting thought that is being blocked out, the idea that ploughing up to EUR7bn a year in real estate, in Europe and in future also in the USA, could someday become obsolete.
Topics: Schwarz Group