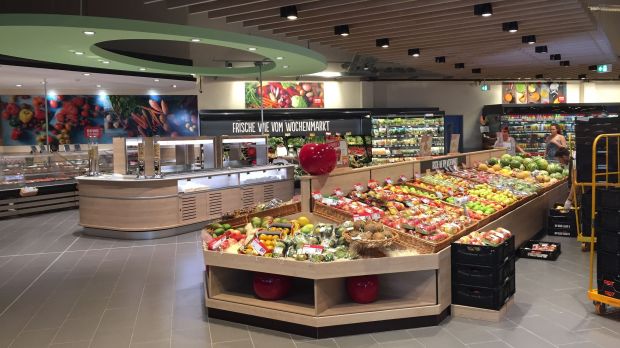 Photo: LZ Retailytics
Making supermarkets super again: The fresh departments constitute the showpiece of a supermarket, as demonstrated here by Rewe.
Supermarkets celebrate their 60th anniversary in Germany today. On 26 September 1957, the first self-service supermarket was opened in the country, located in a former sports hall in Cologne. The store had 2,000 square metres of sales area, unusually large for standards of that time.

Initiator was Herbert Ecklöh, who became a well-known person in the industry when he acquired the Hussel confectionery store chain and later the perfumery retailer Douglas.

There was a spirit of optimism in the 1950s in Germany, after the war, which saw entrepreneurs try new things, backed by a relatively liberal economic environment and with inspiration from the USA – now the shining example not only for business but also cultural influences. Of course, many used their activism as a means to avoid facing up to a horrible past, in which more were involved than they would like to admit.

Self-service wasn’t new at that time – department stores and single-price stores such as US retailer Woolworth had already established this payroll cost-saving method before the Second World War. But their expansion was later “verboten”, forbidden by the NS government and their business model declared “unerwünscht”, unwanted, with the intention to protect the German “mittelstand”, SMEs. - While the Cologne store was grandiloquently dubbed the “first supermarket in Europe”, a store opened in 1938 in Osnabrück, by Ecklöh, was said to be the first European self-service grocer.

By the end of the 1950s, already nearly a third of all groceries were sold in self-service stores. The development accelerated the consolidation process – self-service stores require more space, and investment in sales area was too expensive for many smaller players. In the 1960s, discounters, hypermarkets and cash & carries arrived on the scene, all efficiency-focused and intensifying the pressure on prices (despite the retail price maintenance for brands until the end of 1973); in the 1970s, drugstores joined the arena. In the following decades, the supermarkets remained in the spell of these cheaper formats, namely the discounters, and it took until the 2000s to slowly defy their economic dominance by focusing on a supermarket’s strengths, such as variety and service.

By the way, in the 1950s and earlier already, there had been numerous attempts to automate the selling process, including the use of mechanic vending machines. They were all unsuccessful. Some of these early ideas are only slowly entering the stores today. The supermarket of the future will make use of sophisticated technology, from intelligent shelves and smart trolleys to voice activation, shopping apps and personalisation. Electronic Shelf Labels (ESL) will allow supermarkets super flexible pricing, and it is unforeseeable what impact this will have on the discounters – since permanently changing prices, when cleverly done, can undermine one of the discounters’ main USPs.

Today, supermarkets in Germany are preparing for an ever-changing, challenging future. A pleasant shopping environment including cafés and bistros is now considered necessary to make shoppers dwell; that said, instore restaurants still cause retailers quite a headache profit-wise. A diversified fresh offer, regional foods, special interest ranges and ultra-fresh convenience are all ways to attract the spoiled German shopper. Of course, the discounters are going the same way, albeit sometimes half-heartedly.

Amazon is the angst-inducing disruptor, and there are no answers on how to respond to the threat other than trialling grocery home delivery, blocking out costs for the time being. The discounters have no answer either. Superstores – larger supermarkets which are still expanding, other than hypermarkets – could see a non-food revival with product displays that resemble the bestsellers of Amazon.

Looking into the LZ Retailytics database, the future for the format looks sunny with cloudy intervals. The market is saturated, and there are only two players left with a national presence in the supermarket channel  – Edeka and Rewe. Good for them since their competition is more quality- than price-driven. Good for variety, innovation and ambience, but not so good for shoppers who value low prices. LZ Retailytics expects Edeka to largely defend its format market share from 10.4% to 10.3% in 2016 vs. 2021. This compares with 8.3% to 8.9% for Rewe, largely due to the integration of Coop’s Sky stores.

The average sales area will continue to grow slowly, for both retailers. This is due to two factors: Newly built, higher-standard stores including restaurant zones require more room; however, these are often superstores (over 2,500 square metres), not supermarkets. On the other hand, a growing number of smaller city centre and convenience-orientated outlets, including integrated Kaiser’s-Tengelmann stores, have a lowering effect on the average sales area.

Despite the strength of discounters in the German market, Edeka’s supermarkets will defend their leading position in the sales ranking of all banners in the coming years, far ahead of Lidl, and followed by Rewe’s supermarkets.
Topics: Edeka Rewe Group