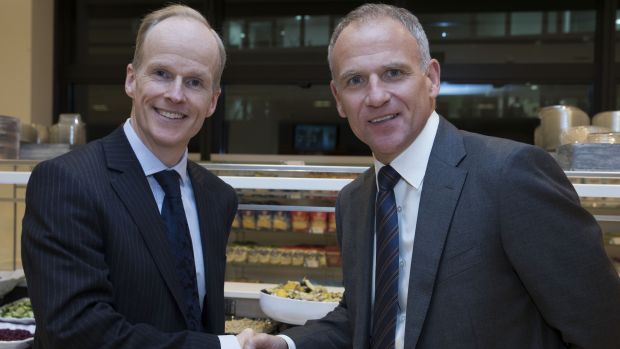 Photo: Tesco
The combined business is expected to start operating on 5 March 2018. Charles Wilson (pictured left) will transition from CEO of Booker to lead Tesco's UK and Ireland operations.

Tesco’s acquisition of the UK’s leading wholesaler Booker is set to become final on Monday, after shareholders of both companies voted in favour of the merger. The deal, which was worth GBP3.7bn (EUR4.52bn) when announced is now valued at more than GBP3.9bn (EUR4.76bn) based on increasing share prices. It has already received the go-ahead from the UK Competition and Markets Authority.

Tesco’s aim is to create the “UK’s leading food business”. Through its acquisition of Booker it gains a cash & carry and delivered wholesale business and becomes supplier to more than 5,600 convenience stores under the Premier, Londis and Family Shopper banners. This adds to more than 2,700 convenience stores under the Tesco Express and One Stop banners and over 900 Tesco hypermarkets and supermarkets in the UK.

Charles Wilson,  previously CEO of Booker, is to become the CEO of Tesco UK and Ireland following the merger, as announced last month.

Dave Lewis, Group Chief Executive of Tesco commented: “This merger is about growth, bringing together our complementary retail and wholesale skills to create the UK’s leading food business. This opens up new opportunities to provide food wherever it is prepared or eaten – ‘in home’ or ‘out of home’.”

The acquisition of Booker is a bold move for Tesco, reflective of a resurgent retailer that has spent three tough years restructuring to regain competitiveness and narrowing its focus to reposition core operations. Having exited unprofitable markets, sold off non-core subsidiaries and drastically reduced its head office workforce, the retailer is now poised to take off and ride the wave of consolidation that is evolving within the competitive UK retail sector.

Tesco is already the UK's largest grocery retailer and following its Booker acquisition LZ Retailytics data shows that it will command a 21.09% share of the UK grocery retail market, almost double that of closest rival Sainsbury's with 11.07%. This heightens its dominant market leading position in the UK but also strengthens its number 4 position in Europe, giving it 3.86% market share and closing the gap with Carrefour (at number 3 with a 4.0% share).

For Tesco, acquiring Booker strengthens its omnichannel presence and gives it new ways to organise its business. At its larger hypermarkets we might expect to see new Booker implants filling in excess space, as Sainsbury’s has done successfully with Argos. A former Dobbies store at Bar Hill in Cambridge has already been converted to a non-member wholesale outlet under Booker’s Chef Central logo, adjacent to a Tesco superstore and offering catering size items on a 930 sq m sales area. Two Extra stores already have an expanded range of larger pack sizes under ‘big pack grocery’ signage. This will also work well online. Tesco might also convert Booker stores in whole or part to serve the online grocery channel, either as darkstores or click & collect points, possibly both. Further synergies can be expected going forwards, across its convenience store estate as well.

According to The Times this week, two stores have already been earmarked for Tesco’s new trial discount format. The mothballed stores, constructed by Tesco but never opened, are located in Immingham in Lincolnshire and Chatteris in Cambridgeshire. This could see Tesco make the ultimate omnichannel move by adding the discount channel alongside hypermarkets, supermarkets, convenience stores, online and wholesale. No other UK retailer operates across so many channels. It represents much opportunity for growth, but also some potential distractions and the retailer will need to ensure it retains a strong focus on core operations at the same time.