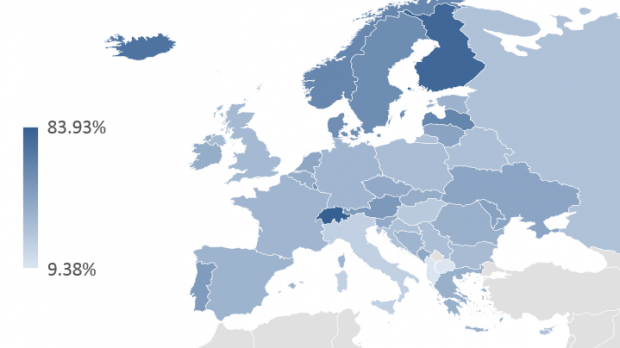 LZ Retailytics is looking at the 2017 combined market shares of the two largest retailers in each European country in a bid to assess the retail market concentration. The key findings are that the Nordic countries and Switzerland are dominated by one or two retailers, with a combined market share above 55%. In detail, Switzerland (83.93%), Finland (80.16%) and Iceland (73.10%) are clearly standing out.

The largest European economies - Germany, France, UK and Spain - all cluster together in the ranking, with the combined market share of the top two retailers oscillating between 32% and 38%. The exceptions below the 30% milestone are Italy (21.44%) and Russia (29.67%). The situation in Central and Eastern Europe varies significantly, depending on the market's stage of development.

Looking Beyond the Topline

As the data shows, the 40 European markets have very unique dynamics and differing levels of development due to the history of the industry, shopper preferences, economic momentum and the level of international investments. The latest crisis has led to multiple and major acquisitions, bankruptcy and divestments across the region in general, but has affected some markets more than others (e.g. Greece).

Why do the Nordic countries stand out in Europe? We believe the long retail tradition, combined with a limited population and the relative lack of market entries from foreign players enable the market to develop in a vacuum, from which a few local top players have emerged. These retailers have strengthened their presence over time by diversifying their retail portfolios. The duopoly in Finland is an extreme case of concentration in Europe, but in neighbouring Sweden, the market leader ICA is bigger that the following three retailers combined, LZ Retailytics data shows.

Similarly, while we notice that the aggregated market shares of the top two players in the largest European economies are within the same range, realities are very different. In Spain, the UK, and to a lesser extent Germany, the gap between the market leader and its challenger is significant, ranging from five to ten percentage points. Meanwhile, France sees the top players sitting shoulder to shoulder. As previously hinted, the case of Italy is quite an oddity in Western Europe, as its multiple small regional retailers maintain a high level of independence while remaining competitive vis à vis the top players, thanks to shifting, multi-level buying alliances and joining forces within large retail consortiums.

The case of Central and Eastern Europe is also very complex, with differing levels of retail development; and could be discussed at length. The Balkan region, for example Albania, records multiple smaller retailers or shop-owner cooperatives emerging from the traditional sector; while Czech Republic posts a high(er) level of concentration due to the sustained investment of a handful of international chains seeking to gain market leadership. Meanwhile, Russia is clearly dominated by two retailers but the fast development pace of the industry, fuelled by growth from untapped territories and the constant decline of the traditional sector, hamper their market shares, at a federal level that is.

To get the complete picture of the retail industry before making key business decisions, subscribe to LZ Retailytics. This will give you and your team access to the extensive but easily accessible data spanning 40 countries over the whole continent. LZ Retailytics includes 410,000 key performance indicators and profiles of 150+ retailers and their 1,000+ banners, operating in 14 retail channels.