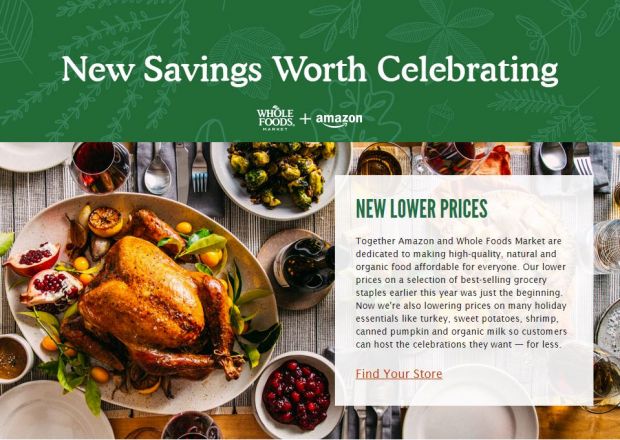 Amazon has announced that it is reducing the prices on best-selling grocery items and holiday staples at its stores ahead of Thanksgiving – and Amazon Prime members will receive even deeper discounts than regular customers.

Reduced prices will be introduced in the US for products including organic turkeys as well as chicken breasts, peeled shrimps, canned pumpkin, organic broccoli, salad mixes and potatoes. As an example of the Prime benefits, the reduced price for organic turkeys is USD3.49 (EUR3.15) per pound, but Prime members can buy these for USD2.99 (EUR2.70) per pound.

John Mackey, Whole Foods Market Co-Founder and CEO commented, “These are the latest new lower prices in our ongoing integration and innovation with Amazon and we’re just getting started.” He said that in the few months that the companies had been working together, the partnership had proven to be a “great fit”.

Bringing Whole Foods into the Ecosystem

Amazon and Whole Foods are just getting started and certainly they are leveraging some trump cards. In August the company reduced pricing on everyday essentials. It was recently reported that Amazon device pop-ups are set to appear in some Whole Foods stores in the US. Now there are discounts on seasonal food essentials for Thanksgiving – with even deeper discounts to reward Amazon Prime members. It is clear that Amazon plans to leverage its USD13.7bn (EUR12.38bn) acquisition of Whole Foods as the bricks and mortar gateway to its Prime ecosystem.

From the company’s press release, it was vague and unclear exactly how staff in Whole Foods stores will verify whether a customer is also an Amazon Prime member. This is likely to introduce some chaos at the checkout as perhaps shoppers will need to show their Amazon mobile app for verification. However, it is highly likely to become a holiday footfall driver. And although the idea of giving loyalty members deeper discounts than regular customers is in no way new, the integration of Whole Foods into Amazon’s Prime ecosystem gives this strategy a whole new strength.

Amazon is not starting a price war, however, since prices at Whole Foods are perceived to be high. Yet it is building loyalty and driving more of its Prime members to Whole Foods and more of its Whole Foods customers to Amazon Prime. Through the integration of Whole Foods, Amazon gives shoppers another compelling reason to become Prime members and this will drive its flywheel even faster. This could be a major headache for competitors in the US and possibly elsewhere too. Whole Foods has a handful of stores in the UK and has already launched online shop in shops via Amazon Fresh and Prime Now. Its omnichannel disruption is only just beginning, we can be sure of more to come.