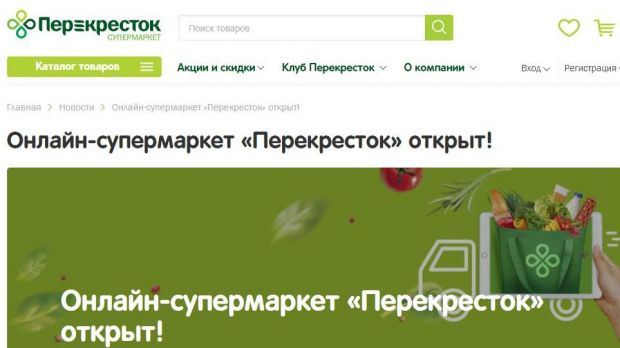 Photo: LZ Retailytics
Perekrestok grocery online operations were launched in April 2017 with orders to date picked and fulfilled from the retailer's hybrid stores. With the latest developments all picking and delivery will be transferred to dedicated dark stores.

X5 Retail Group has announced plans to open two dark stores in Moscow and St.Petersburg by the end of 2018. News portal Kommersant quotes Vladimir Sorokin, General Director of Perekrestok supermarkets, as saying that X5 has budgeted RUB70-90mn (EUR0.94-1.21mn) to invest in each darkstore and is currently evaluating available warehouses sized between 4,000 and 6,000 sq m in both cities.

Perekrestok has been operating its online banner in Moscow since April 2017. According to Sorokin, current hybrid stores process an average of 500 orders daily, with maximum capacity at 800. X5 expects the online  share of its supermarket banner’s revenue to reach 2% within 3 years.

A couple of dark stores and two percentage points of revenue for a banner that barely reaches 15% of group turnover does not seem much. However, as LZ Retailytics already reported earlier, X5 is currently going through a phase of laying the foundations for sustained future success, outside of pushing year-on-year growth and associated economies-of-scale. We expect the retailer’s rapid store expansion pace will slow down substantially by the latest in 2020, when, according to LZ Retailytics forecasts, X5 will have passed the threshold of more than 18,000 stores.

At that time the Russian customer will in all probability have recovered from the economic crisis, willing to reward better quality and a broader service offer with hard currency. For a committed multi-format operator like X5, this means that Perekrestok in its channel will have to hold its ground against Auchan, Azbuka Vkusa, Intertorg and, first and foremost, Lenta in its locations in Moscow and St. Petersburg.

The latter in particular may be a thorn in the side of the market leader, having ascended to the No.3 position in LZ Retailytics’ Russia Country Ranking in 2017. Within one year Lenta has increased its presence in Moscow by more than 70%, and there are 36 more supermarkets confirmed in the expansion pipeline for the near future. In contrast to this, X5 in many municipalities has already reached the legally permitted market share, effectively capping expansion. As a consequence, every added competitor to its catchment area will mean a drop in customer traffic and profitability.

Therefore, strengthening its online arm gives X5 new growth opportunities. Not only is it a base for X5's technological evolution, but it also fortifies Perekrestok’s local brand positioning in its most competitive geographical markets and sets it up for future expansion in two densely populated cities where a darkstore model makes sense. Following Pyaterochka's rise in the minimarket channel, Russia's number one retailer is now looking to demonstrate its authority in the supermarket segment and online. 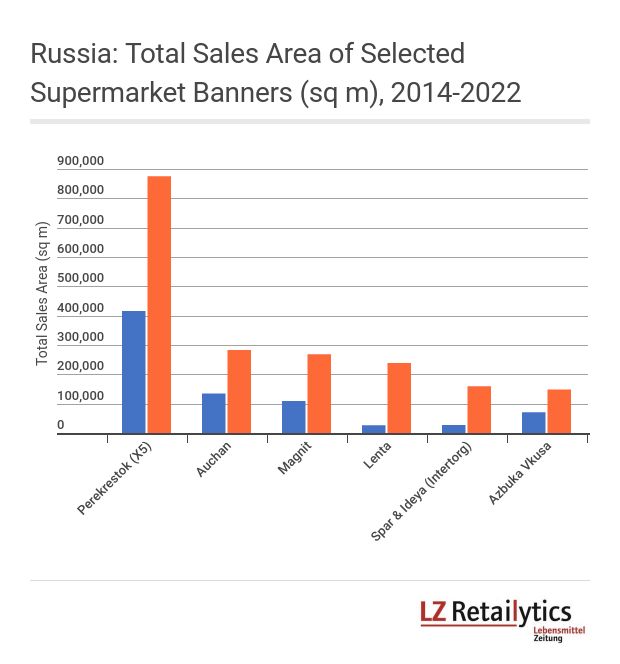 LZ Retailytics
Although Perekrestok reaches almost 40% of total added sales space in the period considered, on a local level competitors like Intertorg (Spar Northwest) for St.Petersburg and Azbuka Vkusa and Lenta for Moscow are on par with X5's supermarket banner.
Topics: X5 Retail Group