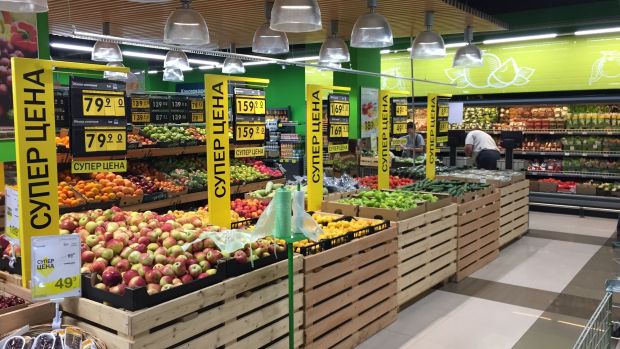 Photo: LZ Retailytics
Forward-looking X5 is continually updating its banner concepts to changing market conditions – here a refurbished Perekrestok supermarket – and now also investing heavily in new technology ventures.
Russian grocery market leader X5 and Mail.ru Group, one of the largest investors in the Eastern European online sector, will cooperate in the field of targeted online advertising. As the retailer revealed in a press release, the partnership is aimed at measuring the impact of targeted online advertising on offline sales. Anonymized data will be accessible to myTarget platform clients.

The Shift from Retail to Technology

X5 teaming up with online expert Mail.ru underscores the retailer’s ambition to increase its lead as Russia’s number one grocer. After continually upgrading its banners to changing market conditions, the message X5 has been sending out in recent months is consistent and clear: Commercial concepts remain at the core of the business, but future success is also based on leveraging technology to improve market knowledge and edge closer to individual consumers.

Technology-wise the Russian market leader is already on a par with international peers. It has invested in a sophisticated geographic information system (GIS), developed in-house for streamlining the expansion process, food safety collaborations, retail technology start-up initiatives, banner-based big data projects and a recent pilot for in-store facial recognition. These are all are evidence that X5 does not rest on its laurels.

However, the latest move also may show increasing pressure on profitability for the leading retailer, which has stepped up its store opening pace for the third year in a row. According to LZ Retailytics data, X5’s store count exceeded the 12,000 mark in 2017, and it opened more than 500 stores alone in the last two months of the year. Considering increasing market consolidation and its expansion into logistically still unchartered territories, profitability levels for newly opened stores are most likely lower and this together with improved performances from other national players is likely to have generated increased pressure.

Consequently, X5’s drive for innovation is a prerequisite to live up to its expectation to open ’10,000 more stores’ in Russia, as CEO Igor Shekhterman estimated in an interview with LZ Retailytics last summer. Providing the customer with personalised added value other than just assortment and price will be instrumental as it strives to reach this threshold. It will also help the company to better understand the online influence on consumers offline purchasing behaviour. X5’s technology-orientation combined with a priority orientation towards its banners' NPS (Net Promoter Score) leaves us with an positive outlook as to the company’s future development.