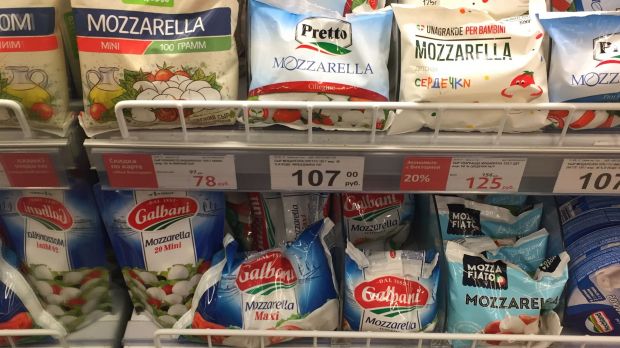 Photo: LZ Retailytics
With import options from the EU limited, many dairy products now are imported from Belarus and Kazakhstan or sourced from domestic suppliers.

Russian X5 Retail Group is testing a new food safety system in the St.Petersburg area. As retail news portal new-retail.ru reports, the company has developed a tracing application, which allows shoppers to determine the authenticity of dairy products. For this, consumers can scan specially designed product codes with their smartphones to receive information about the product and supply chain, such as origin, processing company and location of the retail store that received the item. X5’s cooperation partner, dairy producer ‘Galaktika’, says that it plans to progressively expand the traceability of items to its whole assortment, from 10% currently.

The Russian Rosselkhoznadzor (Federal Service for Veterinary Surveillance) has repeatedly addressed the subject of the counterfeit dairy industry in Russia. After the import ban for food products of European origin came into force, the share of substandard milk and cheese products has increased significantly, according to the state agency.

X5 is keeping a close eye on the market and listening to the Russian consumer. After the import embargo took effect in 2014, many Western-produced assortment ranges – primarily from the fresh categories – had to be sourced from other countries. Additionally, the more than 50% devaluation of the rouble against the Euro endangered the bottom line for many Russian food manufacturers that depended on internationally-sourced raw materials.

With economic pressure high and consumer spending sinking, many counterfeit products appeared on the market. Consequently, several food scandals have hit the headlines over the past few years – and consumers are suspicious of Russian-produced fresh products. A food safety system as tested by X5 would help regain trust for domestic products – and support the retailer's reputation.

At first sight the dairy category appears astonishingly unspectacular. However, this specific assortment is a prudent choice for the multi-format retailer, since this range makes up a large part of fresh revenue across all three of X5’s banners. Also, cases of substituting milk with palm oil and no additional labelling have made consumers wary of dairy products. As an additional advantage the approach could be multiplied at other producers, including X5's Belarusian cooperation partner, Nesvizhskiy.

Seen from a broader perspective, X5 may have discovered an opportunity to support its upmarket development. An innovative food safety system as currently tested, will give the retailer a first mover advantage against competitors. It also stands to gain a quality reputation for its private label lines, making these comparable to brands like Danone, Unimilk and Wimm-Bill-Dann.