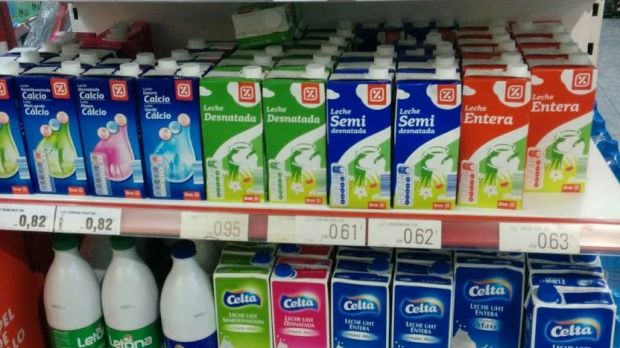 Photo: LZ Retailytics
Private labels dominate within Dia stores.
Spanish retailers Dia and Eroski have announced the creation of a joint company to trade private labels. Known as Red Libra Trading Services, the company will be located in Madrid and employ some 50 professionals to negotiate with private label suppliers.

The two partners claim in a press release the move is "an effort to maximize the price-quality ratio for consumers". Fresh produce is excluded from the scope and the retailers' own commercial strategies remain independent. The Non-Executive Chairwoman position is held by Eroski's Commercial Director, and the Executive Director by Dia's Commercial Director in charge of private labels.

We see this decision as the extension of both retailer's agreement for the joint purchase of branded goods initiated nearly two years ago. Private labels was an expected second step given the fierce competitiveness across Spain. Market leader Mercadona's success relies on quality private labels at the lowest price, and rivals have had to adapt accordingly. Many smaller players joined forces within buying groups such as IFA, but so did bigger retailers, such as Auchan which entrusted the negotiation of its Spanish private labels to Euromadi buying group. In this context, Dia & Eroski - second and third largest supermarket operators in Spain according to LZ Retailytics data - looked increasingly isolated. That's one extra reason to strengthen ties.

A significant part of Dia's assortment is private label focused, an inheritance of its historical role as Carrefour's discount banner. To increase its competitiveness, the retailer has been keen to sign a series of buying agreements. Firstly with French retailer Groupe Casino, including the sourcing and buying of private labels across Europe, as well as with Les Mousquetaires Intermarché in Portugal for A-brands. Despite the low appeal of a struggling Eroski cooperative, a tie up was likely to be an opportunity Dia simply could not ignore.
Topics: Dia Eroski