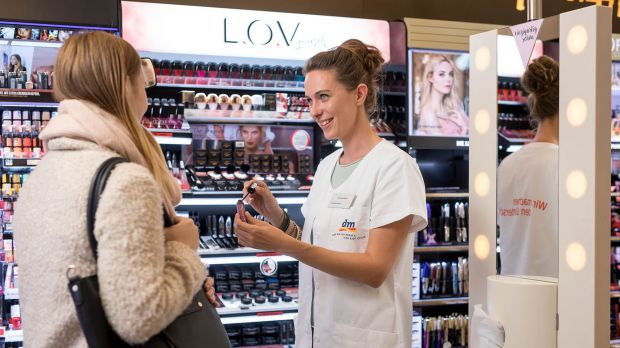 At its full year results press conference, dm announced that it reached its goal of crossing the EUR10bn sales mark. In FY 2016/17 the drugstore operator recorded sales of EUR10.3bn (up 5.7%), with Germany contributing EUR7.9bn (up 4.8%) to the company’s total. dm’s operations abroad increased sales by 8.6% to EUR2.4bn.

Next year, dm plans to invest more than EUR350mn in refurbishments, store openings, its new headquarters and a new distribution centre. The company also has a strong focus on digitalisation. Just to name one initiative, dm plans to equip all its customer facing employees with a smartphone to improve interaction and service. Employees can use the smartphones to answer customer questions immediately on the shop floor, increasing satisfaction and saving time.

Only one day before dm’s press conference, the German online apparel retailer Zalando announced interesting plans which could influence the future of dm and other drugstore players. From spring 2018 onwards, Zalando will start to offer beauty products for its German customers, with other markets likely to follow if successful. It is not known yet which manufacturers will be part of this initiative but a comprehensive product range will be offered, comprising cosmetics, skin and hair care, fragrances and accessories.

Zalando’s entry adds a new player to the already competitive German beauty market, occupied by other drugstore operators like Rossmann but also price-aggressive discounters, continuously expanding their health & beauty assortments. Even German e-commerce giant Otto Group has started to push its efforts in the category by partnering with L’Oréal. On top of that, beauty specialist Sephora, which re-entered the German market this year, has announced plans to operate standalone stores in the market. These will be in addition to the shop-in-shop locations it currently operates at department store retailer Kaufhof. The partnership between Edeka and regional drugstore operator Budnikowsky has not yet given birth to a new banner but should be watched as well.

dm told LZ Retailytics that it will have a close look at the strategies of Zalando and others and act accordingly. However, this does not mean that the company intends to diversify its offer to other categories. Over the last 1-2 years, dm has already invested significantly within the cosmetics category, by listing new brands such as NYX and L.O.V., adding the new private label brand ‘Trend It Up’ and expanding its organic cosmetics assortment. This is the perfect pre-emptive defense against an online pureplayer such as Zalando. Cosmetics is a product category where items would usually only be purchased once a customer has already tested these instore. Still, dm also carries everyday products which can be replenished without the need to go to a store and this is where the retailer will be especially threatened by Zalando’s move.

dm's strategy to cope with this is through high levels of customer service. The company not only intends to equip its employees with smartphones, it is also offering staff the opportunity to attend seminars with make-up artists to build up their knowledge. These trained employees can then advise customers and increase loyalty, driving repeat visits to the store. The fact that dm has not only the right strategy for its stores but also for its online shop can be seen in the figures: the online shop, launched in 2015, saw an 80% jump in sales last year. It appears that dm has little to fear from the future.