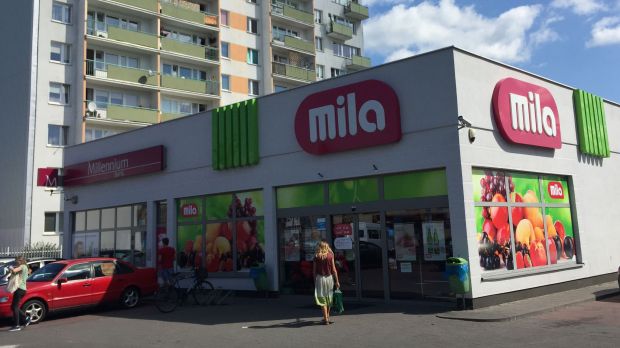 Photo: LZ Retailytics
Mila proximity supermarkets were created in 2015 as a spin-off from Polish Polomarket.

The largest Polish wholesale company – Eurocash Group – has grown its sales in the first half of the year, primarily due to the impact of retail acquisitions and new projects. Company figures show that around half of the total sales growth of 13.5% in quarter two was driven by the added sales of the acquired Eko chain, as well as an increase in the retailer’s own Delikatesy Centrum stores.

Prior to publishing its half year results, Eurocash announced its intention to extend its retail operations with the purchase of the Mila supermarket chain. Mila currently operates 188 stores in Poland’s central regions. The retailer’s 2016 sales were PLN1.5bn (approx. EUR350mn), generating an EBITDA of around PLN5mn (EUR1.1mn). Eurocash has the right to exclusive negotiations with Mila up until 8th September.

Betting on the Right Horse

Traditional wholesale is not a sustainable growth option for Eurocash anymore. Its core customer base of independent traders is shrinking irreversibly, while profit margins for the wholesale segment are significantly lower than for retail operations. Unexpected financial challenges, as illustrated in the current bi-annual report, could endanger profitability and effectively curb strategic leeway. This is far from ideal at a time when additional funds for acquisitions and strategic projects are vitally important.

We see Eurocash’s strategy of strengthening its retail competence in the supermarket channel by acquiring Mila as highly relevant. If the deal is successful, Eurocash will not only achieve a nationwide presence for its destination banner Delikatesy Centrum, but – including Eko stores acquired at the end of last year – will boost its store network by almost half within a year. With economic indicators pointing upwards; and channel peers such as Dino and Polomarket successful in the proximity format; the approach seems prudent. Considering Mila’s comparatively new store base and high sales per store, we expect the investment needed for refurbishment to be minimal. At the same time, the deal could deliver a quick boost in profitability driven by buying advantages, a welcome lifeline in the current market situation.

We are convinced that the proximity supermarket format will emerge as one of the winners of the economic upswing in Poland, regardless of further consolidation in the channel. Leveraging its expanded retail operations will help Eurocash to improve its bottom line and generate assets for developing and rolling out other promising projects such as frisco’s online grocery, Duży Ben liquor stores in Poznan, Kontigo drugstores in Warsaw and 1 minute convenience outlets at transport hubs.