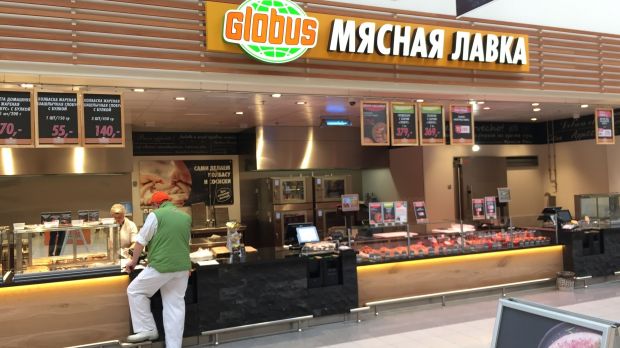 Photo: LZ Retailytics
Happy with Russia: Globus is renowned for its instore food production, which contributes positively to its acceptance in Russia and elsewhere.
German Globus Group, operator of hypermarkets and DIY stores, recorded solid growth for the latest 2016/2017 financial year, mainly due to the positive development of its Russian and DIY operations. Total gross sales grew 6.2% to EUR7.52bn. DIY stores in Germany climbed 5.2% while its hypermarkets in Russia saw an increase of 11.7%, excluding currency effects. In the Czech Republic, turnover rose 2%, while its core German hypermarket operations recorded 1.6% growth, contributing EUR3.3bn to total sales.

EBIT reached EUR268mn in the financial year ended 30 June 2017. Investments stood at more than EUR300mn, of which EUR80mn went to Russia and EUR14mn into the Czech operations. Globus has not outlined overall investment plans for the current business year.

It's Easier in the East

It has been a bit quiet lately around the Innovative Retail Laboratory (IRL) – a research institute for retail technology that was co-founded by Globus. The relatively small, regional, but renowned grocer is seen as one of the very few, if not the only player that manages to run hypermarkets – we mean the really big boxes above 10,000 square metres, not the compact ones – successfully and profitably in Germany. And it has been innovative with the help from IRL. But it turns out that technological success, at least where customers are involved, is more promising abroad than in its home market.

Globus recently discontinued its ambitious Drive concept in Germany, which then resulted in the modification of its initially interesting, but possibly confounding hybrid concept Fridel. Interestingly it is still the traditional, instore innovations that are driving the retailer’s real success, not its e-commerce ventures. Of course, the company says it is happy with its online DIY operations that allegedly show “that bricks & mortar retail and e-commerce can be intertwined successfully” (something Fridel didn’t manage). It has also launched an online store selling wine in the Czech Republic.

But the innovations that make Globus stand out remain those instore, even if some of them are digital: After the roll-out of Scan & Go, a mobile Scan & Go Handy version will be implemented, and Russia will see the introduction of a digital loyalty scheme coming in January. Shop-in-shops have been rolled out in the Czech Republic for organic, raw, lactose and gluten free products; cafés have been installed; instore catering is being extended everywhere, including sushi bars and instore meal preparation, all using Globus' own production facilities.

In its new store in Rüsselsheim, for example – where a 12,000 square-metre Globus replaces a Real hypermarket and a Praktiker DIY store at the same time – 44 out of 300 staff members are employed in the restaurant alone. Glass walled bakeries have been rolled out. Non-food has been separated from food to allow for a quicker shopping journey through the stores. In the DIY section, new services are being introduced, such as a bike repair shop, e-bike loading facilities and 24/7 vending machines for gas cylinders.

These are the features that create USPs for every Globus store, depending on its surroundings. The most popular ones are still local and not virtual – at least in its German home market. But Globus is lucky to have operations abroad, in the East: Russia, in particular, is an unconsolidated market that promises high margins and a lot of room for experimentation. There, in Krasnogorsk, Globus will begin testing a click & collect offer from November. Just four months later, it aims to start home deliveries. Without doubt, this is promising to be more fruitful than in Germany.