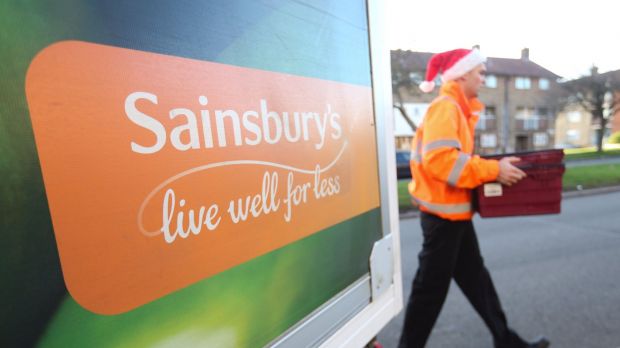 Photo: Sainsbury's
Many of the UK grocers saw a mixed performance. Sainsbury's total retail sales rose 1.2% impacted by weak non food figures. Grocery grew by 2.3%. Online and convenience were up 8.2% and 7.3% respectively.

Many of the leading UK grocers have this week recorded their sales performance over the recent Christmas period (see table). Results were mixed, with premium grocers Marks & Spencer and to a lesser degree Waitrose losing out to stronger performances from price focused Morrisons and the German hard discounters. Sainsbury’s grocery sales for the period were up 2.3%, but overall results were hampered by a weaker performance for its non-food operations. Marks & Spencer suffered from weak clothing and home sales, but even in food the company said it also saw “ongoing trading pressures… as consumer spending and choices reflected tighter budgets."

Market leader Tesco put in a steady performance, with Christmas sales up 2.1% and revenues for the third quarter to 6 January up 2.3% on a like-for-like basis. The company pointed to strong sales for fresh food. It also saw market share growth in the Republic of Ireland and positive like-for-like momentum in Central Europe.

It’s been a challenging and intensely competitive Christmas for the UK grocery retailers. This is a trend that’s likely to continue in the year ahead. Growth in spending for the period was mostly in line with or just below the average rate for the year and with food inflation of around 3% the figures show increasing pressure on retailer margins. Winners in the sector were retailers that catered to shoppers seeking value for money as they tightened their belts over the Christmas period. Notable performances here came from the German discounters, with Lidl increasing sales 16% during the month of December, and from Morrisons, which has invested heavily in price in recent months.

Lidl’s impressive 16% jump in December sales year-on-year shows that the British appetite for the German discounters remains strong. The company, which sold more than 800,000 litres of champagne and prosecco in December, is continuing to expand at a rate of 50-60 stores annually and will continue to grow its market share. The company’s UK chief executive Christian Härtnagel said that shoppers came into the stores “to buy more of their Christmas items, knowing they could find high quality products at market-leading prices.”

Private label lines are increasingly a differentiator for retailers and all pointed to an increase in sales during the Christmas period, particularly across top tier own brands such as Tesco Finest, Sainsbury’s Taste the Difference and Waitrose 1. As previously reported, retailers are innovating at a rapid rate within these lines. Tesco, Sainsbury’s and M&S have all launched new, private label plant-based ranges since new year and we can expect to see continued focus and innovation in the coming months. With the discounters and mid-range retailers offering strong premium private label lines, shoppers appeared to have less need to visit the upscale grocers for their Christmas food and this made for a difficult trading period for Waitrose and M&S.

Finally, the online channel continued to outperform as increasingly more shoppers tap into the convenience of home delivery and click & collect services.  Market leader Tesco saw online grocery sales up 5.0% during the Christmas period, with more than four million orders processed. Sainsbury’s recorded an 8.2% increase in online sales during the period and revealed that – including Argos – it now generates more than 20% of total sales online. Both retailers have focused heavily on adding convenience and same-day online services over the past year, which will help them compete more effectively in a market where Amazon continues to reset shopper expectations.

Looking to 2018, it is likely to be a year characterised by growing disparity between retail performances. A resurgent Tesco will dominate, as it hopes to complete its merger with wholesaler Booker in the coming weeks. The discounters will continue their expansion apace. The British bellwether John Lewis perhaps expresses the mood for the coming year best in its statement, where it says that it anticipates UK trading in the coming year to be “volatile”.