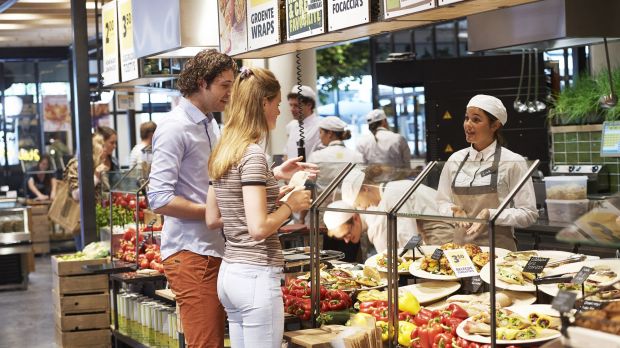 Today, the Dutch retailer Jumbo has opened a second outlet under its new store format banner Jumbo City, at the train station in Eindhoven, in the south of the Netherlands. The 133 sq m stores focusses on food-to-go and particularly promotes healthy food. The offer also includes freshly made sandwiches and sushi. Jumbo City combines features of Jumbo’s Foodmarkt big-box concept with foodservice elements from the acquired La Place chain.

The key differences vs. the first Jumbo City store are not only the size (133 vs. 550 sq m) and the locations (train station vs. inner city), but also the name. The first store, which was opened in May 2017, was named Foodmarkt City but the retailer then decided to rename it to Jumbo City as it turned out that some customers didn't understand the new concept with this name – many customers aren’t aware of Jumbo Foodmarkt stores as there are only a few in the country at the moment.

A Potential Solution for Belgium

Even though the differences from the first to the second Jumbo City store (name, size, location) could help the banner to be successful, we are still not optimistic when it comes to the ambitious expansion plan for Jumbo City in the Netherlands. The retailer has announced an intention to open 100 of these stores in the coming years. However, having only opened two outlets this year, it seems unlikely that Jumbo will meet this target – even though the foodservice offer, which complements its convenience assortment, adds a new feature to the concept. Furthermore, one should not forget that it will be challenging to find suitable locations in the Dutch market, which is close to saturation.

On top of that, Jumbo now has something else on its plate: it is reportedly planning to expand into Belgium. This is also a move not without difficulties, bearing in mind that Belgium is also a nearly saturated market. In addition, the retailer can expect strong competition from Colruyt, which is known for its low prices, as indeed Jumbo is in the Netherlands. Perhaps in Belgium, though, there is the opportunity for Jumbo to roll out more of its new City concepts. Looking at the Belgian minimarket channel, there are only two rather big players; Louis Delhaize with its neighbourhood and Delitraiteur stores and Carrefour with its Express stores. However, the minimarkets of these two players combined only have a market share of 2.78%, according to LZ Retailytics data.

Since Delitraiteur has a similar approach but is comparatively expensive, Jumbo could potentially jump in and grab a piece of the pie. The Jumbo City concept could be the solution to the lack of USP problem that the retailer faces in Belgium. Its convenience stores with their focus on fresh produce and healthy food could prove to be a winning strategy and a clear differentiator to Colruyt’s rather discount-like atmosphere – and to the already existing minimarket banners in the country.